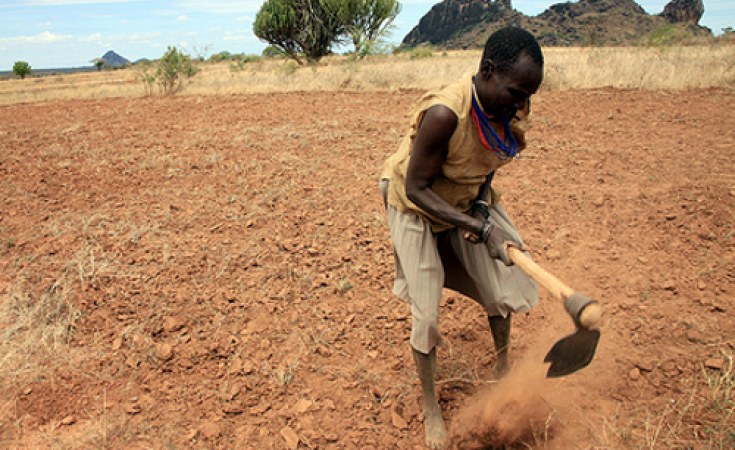 Daniel Mataruka is director of the African Agricultural Technology Foundation (AATF) in Nairobi. The non-profit organization aims to improve the lives and agricultural output of resource-poor farmers in sub-Saharan Africa. Mataruka spoke with AllAfrica.com’s Cindy Shiner about some of the foundation’s projects and prospects for genetically modified (GM) crops on the continent.

Can Africa have a green revolution?

Most certainly so. If we are able to take advantage of the new technologies that are becoming available, using molecular biology tools, or using biotechnology tools and products, Africa should be able to achieve a green revolution.

So are you saying that there can only be a green revolution in Africa if the continent adopts these tools?

It is easier to adopt these tools because we are able to incorporate resistance into a seed. For example, if it is pest control, instead of having to apply chemicals we can put into the seed tolerance or resistance to that given [pest]. One of the problems with African farmers is they are resource poor. They are not able to have resources to purchase fertilizers, pesticides, have irrigation systems in place.

If money was not a constraint we could achieve a green revolution through not necessarily biotechnology, but if we could put irrigation systems in place, if we could afford to purchase fertilizer, pesticides, we should be able to reach a green revolution as what happened in Asia. But being resource poor if we can now incorporate drought tolerance into the seed we then do not necessarily have to invest in massive irrigation infrastructure.

Do you sense the mood is changing in Africa toward greater acceptance of genetically modified crops?

Yes, I think there is a movement toward more and more acceptance. Many countries are now beginning to have frameworks which are allowing researchers to start to test some of these genetically modified crops through confined field trials, even though they have not got to the stage of allowing commercialization. But five to 10 years ago it was unheard of in a lot of African countries that you would be allowed to test genetically modified crops.

Why the change now?

It is probably because more and more African countries are having a reduction in per capita food production. The general African today in the resource poor environment consumes less than what the person consumed 10 years ago. And there is a food crisis.

How about the pledge by the G-8 this past July of US $20 billion for agriculture? Do you see any focus of future funds to support genetically modified food production in Africa?

I think there is still a lot of controversy between the way the U.S. sees genetic modification and the way Europe sees it. When you are seeing more and more countries in Europe pulling out of using genetically modified crops and America, South America, India and China they are going ahead. Now within the G-8 there are different voices. But I would hope there would be more money going in that direction (supporting genetic modification) and for agriculture specifically.

Tell us a about the Water Efficient Maize for Africa project you’re working on.

The Water Efficient Maize for Africa project is made up of a partnership of CIMMYT (International Maize and Wheat Improvement Center), one of the leading maize breeding institutes in the world; Monsanto, a leader in agricultural sciences; and five African governments who are going to directly benefit from the products which will be derived. AATF plays a leading coordinating role in this whole project.

What we are expecting to see is two types of hybrids – hybrids that will have been bred using conventional plant breeding methods, and also hybrids that are going to be transgenic - having genes that confer drought tolerance under moderate stress. We expect yields in excess of 10 to 15 percent with the conventionally bred materials, and [yields] of and of up to 25 to 30 percent with the hybrids which have got the transgenically bred hybrids.

Which African countries plan to use the transgenic, or genetically modified, hybrids?

South Africa, Mozambique, Kenya, Tanzania and Uganda. These countries are going to test for the performance of the both the conventional materials and the transgenic materials.

Would you say that these countries are the leaders in Africa when it comes to more progressive thinking on genetically modified crops?

Nigeria is now the first country in Africa to be growing genetically modified cowpea. We are growing the cowpea under confined field trials. These materials [plants]  have been transformed with the gene for resistance to the pod borer, and that gene is going to be transferred into the locally preferred materials in Nigeria. So the farmer is having that resistance bred into the seed where they do not need to apply as much pesticide on their cowpea crop as they did before. What used to happen is some of these farmers would use pesticides meant for cotton on a food crop like cowpea. When you use herbicides you kill unintended pests and insects so we believe this is going to be very environmentally friendly. It is going to specifically target the pod borer.

What kind of work are you doing with rice?

We are looking at nitrogen use efficiency and salt tolerance. Nitrogen use in rice in Africa we have two eco systems where  where we have got what you call lowland rice, which is grown on areas which are not v high above sea level and the soil in those environs tend to be saline. They they tend to have a lot of salt in them. So we are looking at developing salt-tolerant  lines for those environs while as you go upland bec of the resource poor nature of the farmes they do not have enogh money to buy the fertilize. So we are breeding for those environments plants which with an ability to efficiently use nitrogen so an application of not so much fert the farmer is able to harevest quite signif increased yields bec the plant has an efficient way of using the nitrogen.

What do African governments need to do to support this work?

And the farmers, have they been supportive?

The products we are developing right now are at the very elementary stages of development. African Agricultural Technology is an organization that started just a few years ago. The nature of plant breeding is such that when you start a plant-breeding program it is like an eight-to-10-year program. We are not specifically going out and trying to excite farmers before we have this product available. Because you go to farmer and you say, ‘We have water-efficient maize for Africa,’ and the farmer says, ‘Give me the seed,’ and we say, ‘Oh, we will only be able to give you the seed in 2015.’ So we do not want to create that expectation and fail to deliver.

So the people who are excited at the moment are us who know the potential of what this thing is all about, the people who are giving the technologies and the scientists within the national program who have an understanding of their environment and what their farmers want.

One of the interesting things about Africa is a lot of these scientists in these African national programs are men and women who were brought up in villages so they know what their families want. They subsidize their families in the rural areas because these people are unable to produce enough to feed themselves. So when they want money sent to them to supplement their food requirements until the next harvest it is these researchers who send money back home.

What is the over-arching objective of your organization?

To see a prosperous African farmer who is food secure. And our intent is to negotiate access to proprietary technologies and have them delivered to these farmers who otherwise would never have access to such technologies. And we would want to deliver them to these people at an affordable rate.

Did you grow up on a farm?

What do you remember most from that?

The pain associated with weeding.

Maybe you’ll come up with something to destroy weeds forever.

Part of these technologies is looking at trying to build into the seed an ability to resist some of these constraints. Hence the use of herbicide-tolerant maize, for example, which has recently been commercialized in places like South Africa. It confers resistance to, say, a given herbicide to the crop of interest. So when you spray this herbicide it will kill every other plant but your plant of interest is left intact. It is similar to the cowpea where we are breeding in resistance to the pod borer so the farmer doesn’t necessarily have to go and spray. The plant has built-in resistance against that pest.