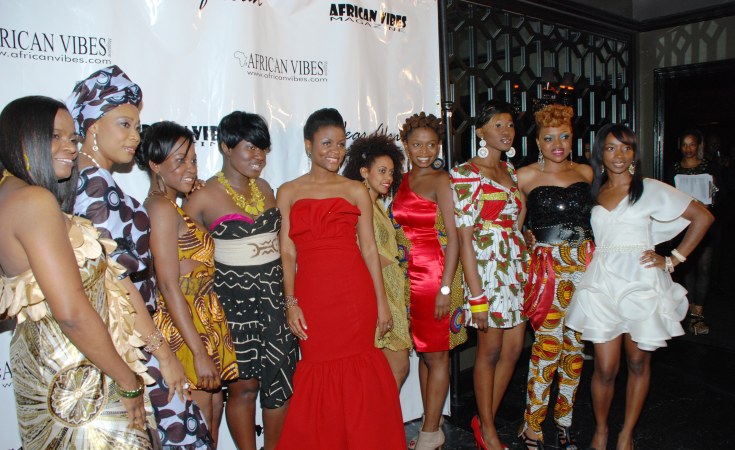 Los Angeles — African Vibes Magazine has held its fourth anniversary celebration in Los Angeles, California. The gala event on April 24 kicked off in the early evening with the “I Wear African” fashion show, highlighting some of the newest names in African fashion. There were musical performances as well as an after party where many of the Los Angeles African community socialized into the night.

Among the designers was Korto Momolu, who has appeared as a contestant on the American television show Project Runway. Momolu is a Liberian-born fashion designer whose work has been worn by celebrities and sold in American department stores. She has quickly become one of the most well-known young African fashion designers in America.

Among her fans is Liberian President Ellen Johnson Sirleaf, for whom Momolu designed a piece to wear. The garments that Momolu showed at “I Wear African” featured several solid and well-designed items accessorized with pieces from her line of handbags.

Other designers included Sheila Denanyoh, a Ghanaian college student based in Ohio who founded Ill-la-la Designs in 2008. Sheila, in her last year of college, brought a design style to the fashion show that was young, fresh and playful. Her kente cloth print dress was a creative 21st century interpretation of a tradition African print.

Designer Arthlene Legair is from Dominica, West Indies, and is also based in Ohio. As the founder of Legair Brand, her collection at the show included pieces that were a throw-back to classic African silhouettes and others that clearly reflected a blending of African and Caribbean influences. Legair’s daughter is also a designer and there are plans for a line she designed for younger women to be added to the Legair collection.

Chicago-based Congolese designer Kahindo Matee is the founder and head of Modahnik. Using high quality Vlisco wax material, Matee has created a line that appeals to the progressive African woman who loves the rich colors of African fabrics but requires a modern design style.

The fashion aesthetic of Cameroonian designers Maryanne Mokoko and Stephanie Mouapi is eccentric and avant-garde, two terms that have become clichés, but are nonetheless completely applicable to their designs. Mokoko and Mouapi take African fashion in a unique direction. The designers, based in the Washington, DC, area, created Cote Minou in 2006 and have been showing their designs at fashion shows all over the United States.

Ethiopian fashion designer Mekdes Tefera Taye has participated in fashion shows all over the world, and will debut her skills as a costume designer in the upcoming Ethiopian film, “The Return of Grace”. Based in Ethiopia, her designs presented at “I Wear African” reflected a variety of influences. Some of her pieces featured traditional Ethiopian cloth and most featured a flare of sexuality with exposed backs and strategically-placed straps.

Ivorian designer Christiane King was also a contestant on Project Runway and brings diverse experiences to her designs. Based in Los Angeles, King’s designs reflect the designer’s experiences in France and the United States. Her pieces at the fashion show were fun, colorful and playful.

Nigerian jewelry designer Monalisa Okojie showed pieces from her Coral Collection. Okojie is the creator of NEHITA and specializes in using various stones and gold in her jewelry collections.

Avenue C is an up and coming trio that blends rhythmic singing and rap lyrics. The group is relatively new and has plans to release an album soon.

Rap artist 2C is also new to the music scene. He dedicated his song “Liberian Girl” to fellow Liberian Korto Momolu. This portion of the evening was closed out by headlining act, soukous superstar Awilo Longomba. Longomba gave a brief but memorable performance, ending the show and ushering in the after party celebrations, which lasted until 2am.