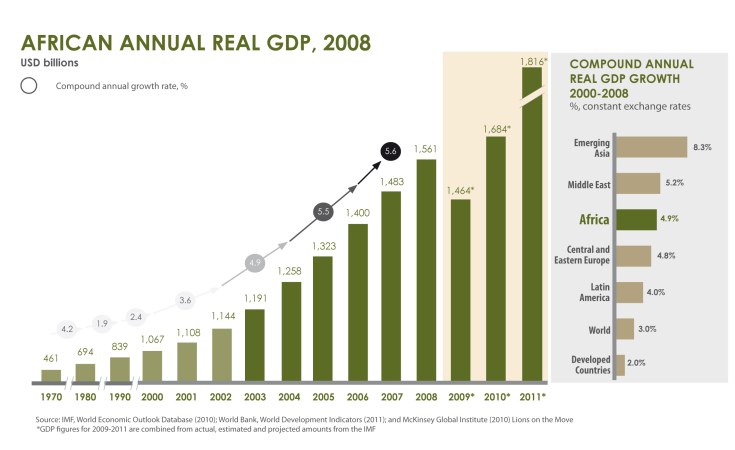 Africa Progress Panel
This graph published in the Africa Progress Report 2011 shows how steady African growth was interrupted by the global financial crisis in 2009 but is expected to regain its momentum through 2011.
allAfrica.com
By Melissa Britz

Economic progress has not increased social benefits to the majority of Africa's people despite the continent's unprecedented economic growth of an average six percent in the five years preceding the crisis, the report says.

But it notes that social protection and poverty reduction are still lacking.

"Despite strong economic growth, an overall improvement in the policy environment, and many success stories, particularly in the area of primary education, the continent as a whole is lagging behind on each of the relevant goals," the report said. "Progress, already too slow, now risks being further undermined by the effects of the global economic crisis and climate change."

The crisis has not only hurt economic growth and resulted in job losses but it also has affected government spending patterns.

"Effects are being transmitted to African societies through several channels. In terms of public expenditure on social sectors, the crisis is not only squeezing the ability of African governments to sustain the levels of investments they were able to make over the past few years, but it is also resulting in declines in public expenditure on social sectors as a percentage of GDP," according to the report.

"The lack of public social safety nets to offset the negative impacts on individuals and families is compounding the situation, with the working poor and other vulnerable groups enduring the greatest impacts of the crisis."

Progress has been made in meeting education targets, with 30 African countries on track to reach universal primary education by 2015, but much remains to be done with 50 million children still without access to primary education.

Climate change presents not only challenges but opportunities.

While changes in rainfall patterns, as well an increase in the occurrence and severity of natural disasters and lower agricultural
yields, present significant obstacles, climate change "also offers the continent new chances to profit from its vast carbon sinks, leapfrog dirty technologies, and embark on a path of low-carbon growth and clean development," the report says.

African countries are increasingly cooperating on climate issues as was evident from the "common negotiating position" at the COP 15 summit in Copenhagen, Demark.

"Nationally, many of them have formulated National Adaptation Programmes of Action and are pursuing reforms to encourage sustainable land management and combat deforestation."

The Millennium Development Goals were formulated and adopted by all the members of the United Nations in 2000. Eight goals were set with 21 "quantifiable targets" that should be achieved by 2015.

The goals, according to the United Nations Development Programme, aim to:

The Africa Progress Panel Foundation is based in Geneva. 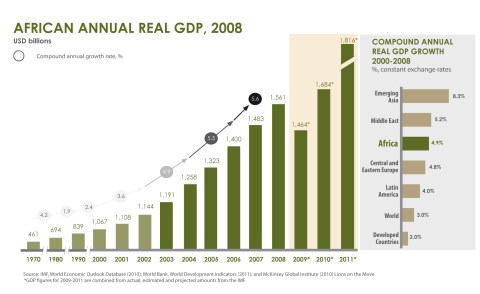 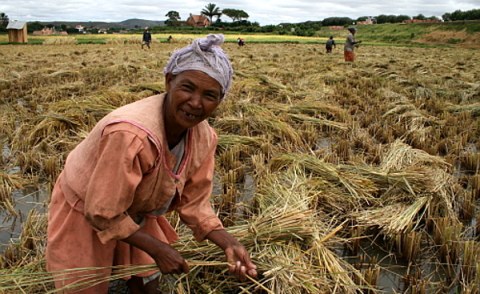 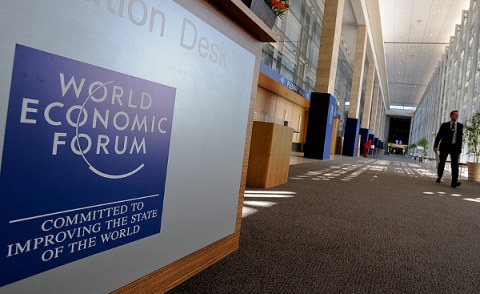 African Leaders Pledge to Work Together
Tagged:
Copyright © 2010 allAfrica.com. All rights reserved. Distributed by AllAfrica Global Media (allAfrica.com). To contact the copyright holder directly for corrections — or for permission to republish or make other authorized use of this material, click here.