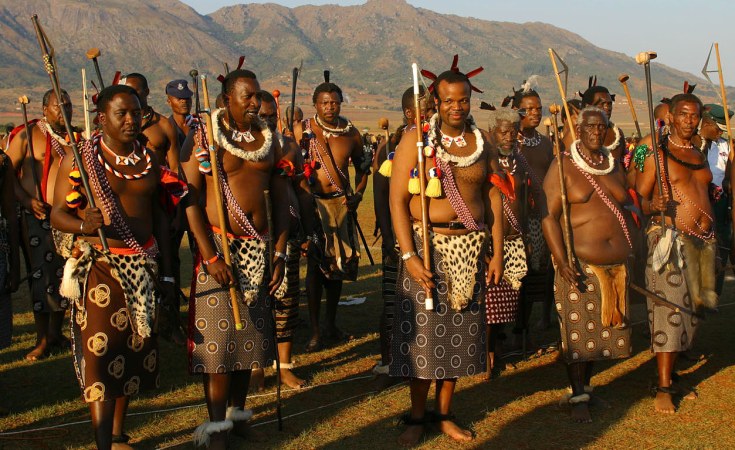 Darron Raw
King Mswati III, middle, with senior princes and warriors whilst at the annual Umhlanga Reed Dance. Amos Mbedzi's crimes allegedly occurred in the context of an attempt to place explosives under a bridge near important Swazi government and royal buildings - part of an ostensible plan by an opposition group to overthrow the current absolute monachy.
UN Integrated Regional Information Networks

Mbabane — No individual or group in Swaziland has admitted responsibility for a spate of recent bombings against government and opposition party targets, but their actions are creating a sense of instability in the aid-dependent southern African state.

"The bombings have not caused any casualties as yet, but they are so frequent now and all over the place that we are asking, 'What is happening in Swaziland?'" an NGO programme officer, who declined to be identified, told IRIN. So far the bombing campaign has not disrupted the activities of aid organizations.

King Mswati III currently serves on the Troika on Politics, Defence and Security Co-operation of the Southern African Development Community (SADC) and has been leading the regional body's efforts to re-establish democratic norms in the Indian Ocean island of Madagascar after the unlawful transfer of power there in 2009.

Swazi police said commercial explosives were detonated on 10 June in the bathroom at the Magistrate's Court in the commercial hub, Manzini, and that in the past month the residences of two members of parliament had been petrol bombed, as well as the homes of three police officers in separate attacks.

Political activist Alex LaNgwenya's home in Bhunya, 80km south of the capital, Mbabane, was bombed on 8 June; the explosives were so powerful that damage was caused to homes in an adjacent workers' compound.

LaNgwenya is a leader of the Swaziland Youth Congress (SWAYOCO) of the People's United Democratic Movement (PUDEMO), pro-democracy group. He and family members all survived the attack, and have denied allegations that the bomb was made by PUDEMO and exploded inadvertently on the premises.

In 2008 two PUDEMO members were killed by an explosion at a bridge about a kilometre from one of Mswati's palaces. Police alleged that the three men involved - Musa Dlamini and a South African, Jack Govender, who were killed, as well as another South African, Amos Mbedzi, who survived the blast - had planned to destroy the bridge.

The Suppression of Terrorism Act of 2008 was enacted soon after the incident, and PUDEMO and SWAYOCO were banned as terrorist organizations. Several members of PUDEMO and SWAYOCO were alleged to have carried out a bombing campaign and detained. Anyone found guilty of belonging to a terrorist organization is liable to a prison sentence not exceeding 10 years.

Bombings have increased in intensity since 1995, when a petrol bomb extensively damaged the Houses of Parliament in Lobamba, 20km east of Mbabane. No person or organisation has ever acknowledged any involvement in a bombing incident.

Sipho Jele, 34, one of several PUDEMO members on bail after being arrested in 2006 on various bombing charges, was again arrested on May Day 2010 for wearing a PUDEMO T-shirt. He died in police custody.

The South Africa-based Swazi Solidarity Network (SSN) said in a statement on 14 June that the Swazi security forces were using the bombings as a screen to "conduct illegal raids and arbitrary detentions of known political activists".

The SSN said police had detained more than 10 SWAYOCO members, arrested another on charges of bombing the two MPs houses, and had raided the home of PUDEMO president Mario Masuku on 14 June.

The question of who the perpetrators of the bombings are has sharply divided Swazis; some insist it is the work of political opposition groups, while others maintain the incidents are being coordinated by elements within the government to justify greater use of the terrorism act against pro-democracy activists.

"We are confident that, working hand in hand with the entire security apparatus of the nation, we shall have positive results," Prime Minister Barnabas Sibusiso Dlamini told Parliament recently. "We are confident that arrests would soon be made and a clear message sent to everyone that terrorism in all its forms would not be tolerated." 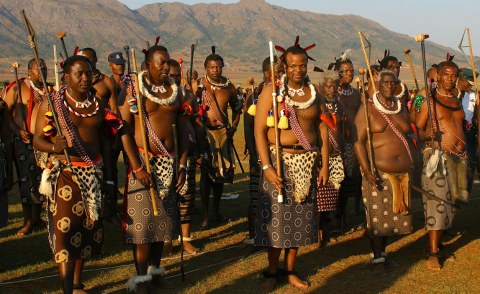 South African Jailed Over Botched Bomb for Swazi King
Tagged:
Copyright © 2010 UN Integrated Regional Information Networks. All rights reserved. Distributed by AllAfrica Global Media (allAfrica.com). To contact the copyright holder directly for corrections — or for permission to republish or make other authorized use of this material, click here.