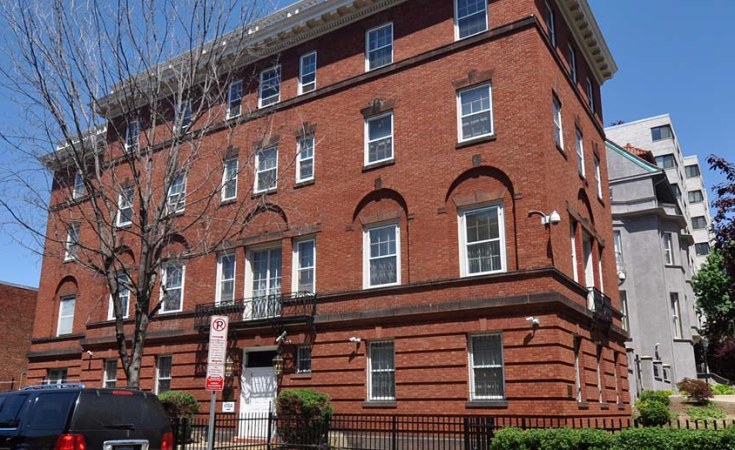 M.V. Jantzen
The consular section of the Angolan Embassy in Washington, DC. The embassy is among missions which have been subjected to restrictions on their bank accounts.
allAfrica.com
By Reed Kramer

At least 16 other African missions in the United States and a similar number from other regions are said to be facing service restrictions imposed by several large U.S. banks, according to U.S. government officials and private sector sources, who declined to be identified due to diplomatic complications the actions are causing.

"The Department of State seriously regrets the inconveniences - in some cases, very serious inconveniences - that African embassies and others have been subjected to as a result of actions by a number of American commercial banks," Assistant Secretary of State Johnnie Carson said when asked about the problem in an interview Monday.

Senior officials have reached out to banking institutions to help find a solution, he said. At the same time, officials are stressing that the U.S. government "does not control the banks in this country and cannot dictate to them who they shall have as their customers."

But African diplomats are looking to the administration of President Barack Obama for forceful intervention. The Angolan ambassador, Josefina Pitra Diakité, who has served in Washington since 2001, has appealed to Secretary of State Hillary Clinton for assistance. American businesses with interests in Angola have voiced concern to officials in government and the banks.

Ambassador Roble Olhaye from Djibouti, who - as the longest serving envoy in Washington - is dean of the diplomatic corps, said in an interview that he has asked senior State Department officials "to find an interim solution so these countries can carry on their diplomatic activities in this country." While some of the affected embassies have not yet had their accounts closed, Angola and several others are now unable to access any of the funds they have on deposit in the United States.

Angola, which has twice the land area of Texas, last year overtook Nigeria as Africa's largest crude oil producer and has become the sixth largest supplier of imported oil to the United States. Bilateral relations with the United States, which have been generally cordial in the post-Cold War era, moved a step higher following Clinton's visit to Luanda last year. Since that time, U.S. government efforts aimed at combating HIV/Aids and improving health have increased and working groups to promote cooperation on energy and security cooperation have been established.

As the country's oil output has risen, so have been allegations of widespread corruption involving both the Angolan government and the rapidly expanding oil and banking sectors. A U.S. Senate investigation subcommittee, chaired by Michigan Democrat Carl Levin, in a February report cited Angola "for an ongoing corruption problem, weak anti-money laundering (AML) controls, and a cash-intensive banking system."

The Angolan embassy began doing business with Bank of America three months ago after HSBC Bank USA closed all embassy accounts, apparently as part of a broader move to reduce or cut ties with the oil-rich African nation.

In a letter dated October 25, 2010, Bank of America advised the embassy to stop writing checks and stated that all embassy accounts would be closed by November 9. But the letter gave no reason for the action, and no additional information has been provided. Embassy funds on deposit with the bank remain frozen, leaving mission staff in Washington without operating funds, according to sources familiar with the situation.

A statement from the bank issued in response to an inquiry from AllAfrica said: "Due to confidentiality, we can't comment on specific client relationships. In general, Bank of America Merrill Lynch is actively committed to providing banking services for the diplomatic community. This includes countries in Africa, where we have a number of clients and are pursuing other opportunities."

In June, Reuters reported that Senate pressure may have prompted HSBC to halt all business dealings with an unspecified number of private Angolan banks. HSBC declined comment, according to the news agency, which cited "a source with direct knowledge of the matter" for its report. The Senate investigation criticized HSBC for close ties to Banco Africano Investimentos, a U.S.$7 billion private Angolan bank, "despite troubling information about its ownership and failure to provide a copy of its anti-money laundering policies and procedures." In August, the Federal Reserve System censored HSBC for shortcomings in enforcing anti-money laundering requirements.

On Sunday, the Financial Times reported that the consulting firm Deloite is carrying out an "independent examination" of anti-money laundering procedures at HSBC, which is facing investigations by several federal government agencies.

Banks are facing increasing scrutiny from anti-corruption groups for their activities in many countries. A March 2009 report on international banking, issued by Global Witness, charges that "dozens of British, European and Chinese banks have provided Angola's opaque national oil company, Sonangol, with billions of dollars of oil backed loans, though there is no transparency or democratic oversight about how these advances on the country's oil revenues are used."

Heightened attention to bank involvement in questionable practices is believed to be at least the partial impetus for increased restrictions that a number of African embassies and diplomatic missions in the United States are now facing in their dealings with American banking institutions. Increased scrutiny from many governments, led by the United States, designed to stop money laundering and combat financing of terrorism, has raised the cost for banks of doing business with smaller countries and reduced incentives for handling the once-lucrative accounts.

With so many governments involved, diplomatic efforts to find a resolution have intensified. Ohaye, whose small nation has not had its banking services curtailed, said a crisis comparable to what is happening in Washington is now brewing in New York, where he also serves as his country's representative. United Nations missions from many countries have been notified by a bank, which he would not name, that their accounts will be closed in March, he said. According to one knowledgeable source, the bank involved is JP Morgan Chase.

The bank crisis is threatening to strain U.S. Angola relations. Ambassador Diakité, who had been expecting to host Angola's independence celebration, has departed Washington to return to Luanda for consultations with her government on how to handle the situation. Jose Eduardo dos Santos, who heads the ruling MPLA, has been president since 1979, and a revised constitution abolishing direct elections for the presidency assures him of remaining in office until 2012. The country's economy has been one of the fastest growing in Africa since the civil war that began at independence in 1975 ended in 2002.

Christopher J. McMullen, who was confirmed last month by the Senate as the new U.S. ambassador to Luanda, may not be able to take up his post if the government there grows increasingly unhappy with the actions affecting its embassy in Washington. Assistant Secretary Carson said that, in a telephone call last week, he assured Angolan Foreign Minister Assunção dos Anjos that the administration wants to see a solution. Top officials, including Under Secretary of State Robert Hormats and Under Secretary of Treasury Stuart Levey, have gotten involved as well.

"Concern about this problem has percolated to the highest levels around here," one official said Monday, speaking on background. "But nobody can figure out what we in government can really do - and the Africans find that hard to believe."

Previous Story
Next Story
No Problem With Accounts - Mozambican Ambassador

No Problem With Accounts - Mozambican Ambassador