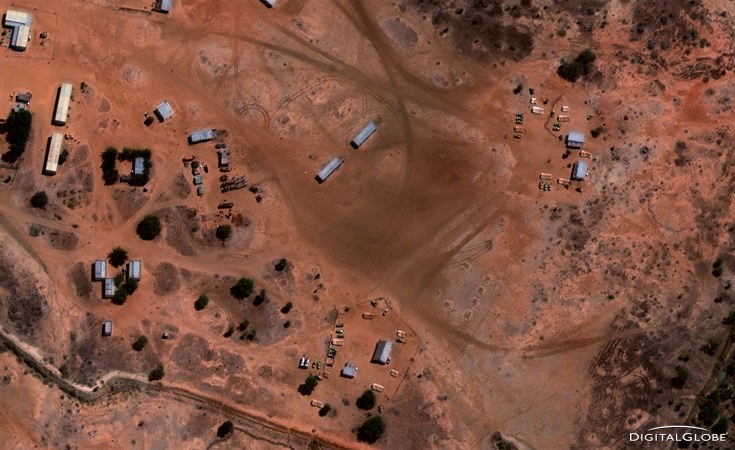 However, the full strength and the capacity of the northern troops have not been confirmed, the project says, and they “do not currently appear to be preparing forward movement from their current positions.”

A report issued Thursday by the Satellite Sentinel Project (SSP) says its monitoring “provides the first public evidence confirming some of the recent reports of Sudanese Armed Forces (SAF) deployment in South Kordofan (a province of Sudan) and checkpoints on the roads north of Abyei.”

• “At least company-sized deployments” of SAF troops near Muglad, Kadugli, Kharassana and elsewhere in South Kordofan;

• Rapid improvements to roads in the area; and

• Images of checkpoints on various roads.

The SSP is an initiative of the United States-based non-governmental organizations, Not On Our Watch and the Enough Project, working with the Harvard Humanitarian Initiative, the United Nations UNITAR Operational Satellite Applications Programme (UNOSAT) and commercial companies such as Google.

Two retired U.S. military officers, Major General Paul Eaton and Major General James “Spider” Marks, reviewed the images, and the actor George Clooney, who brings the high visibility of an American celebrity to the project, is a project co-founder.

The project says it is also monitoring soldiers of the Sudan People’s Liberation Army, which owes its allegiance to the rulers of South Sudan. However, it did not report on their deployment.

In a press release accompanying its report, the project notes that troop buildups have been reported on both sides of the border between South and North Sudan. It cites sources such as the Small Arms Survey as saying there are about 55,000 SAF troops – “half the strength of Sudan’s standing regular army” - in about 100 garrisons along the border of South Kordofan.

“The satellite imagery collected to date by SSP is consistent with those reports, and it provides photographic corroboration of company-size deployments, light armour, mobile artillery, and other offensive military equipment, as well as helicopter transport.”

But the troops did not appear to have the fuel trucks and troop transports they would need to move over distances. And evidence of roadworks could be related to oil production and seasonal repairs.

John Prendergast, co-founder of the Enough Project, said the SSP aims “to shine a light on potential conflict areas to deter the resumption of civil war and ensure accountability … The idea is to monitor these hotspots and deter human rights crimes before they happen.”

He added that although the images did not show any violations of the peace accord under which Sudan is being ruled, “in the absence of negotiated post-referendum arrangements, and given the unresolved status of Abyei, continued vigilance is required.”

Abyei is a contested oil-rich region of Sudan which has still to decide in a referendum whether it wants to join South Sudan or remain part of the north.