Eva Haroun, who was in Tahrir Square on January 25 and on February 11 to witness both the start and the climax of Egypt's popular uprising, reports from Cairo on the euphoria of the moment and the hopes and concerns for the future.

Friday night, February 11. The streets of Cairo echo with chants, singing and a cacophony of car horns. Fireworks crackle and explode in the sky and the word comes through that it is not just in the capital, but in towns and cities throughout the country that similar scenes are playing out. Egyptians, at least the large mass of the population, are jubilant: freedom at last is the cry as millions surge down the alleyways and boulevards, flags held high.

Here is a people celebrating the recovery of their human dignity after for many, a lifetime of subjugation and repression. The atmosphere is electric, emotional. I find myself being hugged and kissed by the young men of the April 6 Movement that sprearheaded this outburst of popular power. They are euphoric, but there s also an obvious wariness as they tell me: "Let's enjoy today, tomorrow is another day."

Hosni Mubarak, the president who clung so patronisingly and desperately to power before having to slink off, is now even more greatly despised. "He should have left on the very first day when he might still have retained some dignity," is the consensus view among the activists. Instead, they say, he waited until he was cursed, insulted, snubbed and slighted, his picture trampled and spat on.

In the first of his three televised speeches to the nation after the rebellion began, Mubarak declared: "I am stubborn." The response of the young demonstrators on Tahrir Square came straight away: "Each one of us holds three PhDs in stubbornness." Followed by the chant: "We are staying ? you are leaving!"

In what might have seemed confusing to non-Egyptians or those outside the country, the mainly young protestors continued throughout to look to the army as an ally. In Alexandria, for example, on the night before Mubarak finally stepped down, thousands of demonstrators marched from the city across the Corniche along the Mediterranean coast, to the nearest army camp shouting: "The army and he people are one."

In Egypt, this chant is a fact. For the Egyptian army, unlike the police, the interior ministry forces and the elite Republican Guard, is a conscript force. Almost every family in Egypt has a son, brother, cousin or other relative either in the army or who has served in a force that is regarded highly as a national institution.

One of the major dangers when Mubarak refused to go was that the people and "their" army would face off against the loyalist forces headed by the 100 000-strong praetorian Republican Guard. A civil war such as this would have virtually destroyed the country. Within the inner circles of the dictatorship, wiser council prevailed; Mubarak was told to go and what had been a million and more protestors turned into many millions of celebrants.

This perhaps once in a lifetime carnival went on until dawn. The youth of April 6 had taken that first, most difficult step, to break the bonds of fear, and it is obvious they have, like the English poet Shelley wrote, been "shaken to earth like dew".

However, reality has begun to to dawn widely this weekend: the cleaning has to start. Not just of streets littered with the detritus of two weeks of protest and struggle, but also of a regime and government apparatus riddled with 30 years of ingrained corruption.

Under Mubarak ? known on the street as Teflon: "You can spit in his face and it wouldn't stick" ? corruption and nepotism were endemic. Ministers siphoned off millions of pounds from public funds while thousands of hectares of land were sold for a handful of dollars to relatives and friends.

These are not new revelations. Egyptians knew about the wrongdoings of the people in power, but fear kept them silent. The few who dared to reveal the rampant corruption paid dearly for their effrontery. Khaled Said was killed by security men in a cyber cafe in Alexandria last year, because he had a video showing police officers sharing a recently confiscated drug cache.

Under the previous minister of interior, Habib Al Adly, it was common practice to sell in the streets the heroin, cocaine and marijuana seized by the anti-narcotic squads. The general prosecutor, quoting British intelligence, had already opened an investigation into Al Adly, whose officers conducted systematic torture in prison cells.

According to these documents, Al Adly is alleged to have been "a mastermind" behind the deadly attack on the Coptic Chruch of Alexandria on December 31. The documents state that the attack was carried out "with the intent to blame it on Islamists, escalate the Egyptian government's crackdown on them, and gain increased western support for the Egyptian regime".

But questions are already being asked about whether the High Council of the Armed Forces has both the ability and political will to bring these former officials to trial. The military brass are to be advised by a "Council of Elders" that has apparently been established, although no names have yet been announced.

So far the army high command has pledged to lift the emergency regulations, free the press, introduce democratic reforms to the constitution and allow "free and fair" elections. The task facing the military men is enormous and there is no detail yet about how any of this will be achieved.

In the meantime, there are insistent demands from the street that government policies regarding health, education, employment and the economy be reformed to the benefit of the majority. And some questions are already being raised about whether, without consultation, the military should have announced that Egypt remains committed to all international treaties, including the 1979 peace treaty with Israel.

To extend the analogy of the April 6 activists: the party is over and tomorrow may already be dawning. 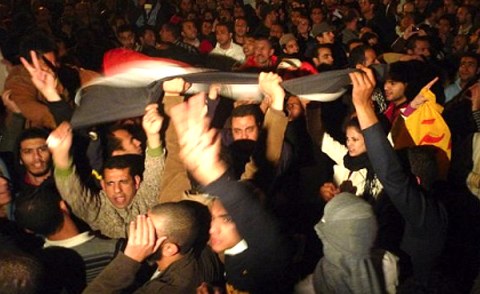 Egyptians Endorse Changes to Constitution
Tagged:
Copyright © 2011 allAfrica.com. All rights reserved. Distributed by AllAfrica Global Media (allAfrica.com). To contact the copyright holder directly for corrections — or for permission to republish or make other authorized use of this material, click here.