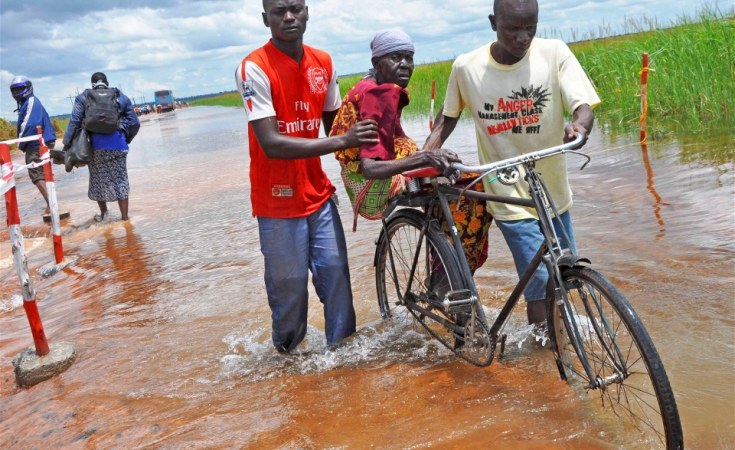 Several towns and villages are suffering flooding and intrusions of salt water, which are damaging property and tainting clean water supplies. Scientists and government officials attribute the problem partly to climate change, but crumbling sea defences are also to blame.

The increasing disaster threat has led government officials to urge residents to move to higher ground, and to promise to repair seawalls. But the country's key tourism industry remains at risk as rising seas and worsening storm surges erode beaches and coastal infrastructure, experts say.

In Pangani Diustrict's Buyuni village, which lies just a stone's throw from the shore, over a dozen families have abandoned their homes after they were flooded by the sea and sought refuge with friends and relatives in safer areas, according to village chairman Saleh Ali.

Fisherman Vicent Magomba, 51, is increasingly worried about the security of his family home as sea water is eroding its foundations.

"I don't have peace of mind because I do not know when the water will destroy my house completely, and I do not have money to build another one," he said.

Waves have left watermarks on the walls of most of the village's brick houses, a clear indication of the threat their occupants face.

The government has blamed the effects of climate change for the rising level of the Indian Ocean, which is disrupting life in many coastal settlements - from Pemba Tanga Bagamoyo to the country's largest city, Dar es Salaam.

"There is no doubt that sea-level rise has been inundating infrastructure, including roads and shallow water wells, in coastal towns," Teresa Huvisa, minister of state responsible for the environment, told AlertNet in a telephone interview. "This is a deepening development challenge the country is facing."

Henry Laswai, a professor of climate science at Sokoine University of Agriculture in Morogoro, said human-induced climate change can directly affect sea level through a process known as thermal expansion, when warmer temperatures cause water to expand.

Other factors contributing to sea level rise include the melting of glaciers - some of the world's largest reservoirs of fresh water.

"When the temperature exceeds a particular level, glaciers and ice sheets will lose mass, as is the case with glaciers on (Tanzania's) Mount Kilimanjaro," Laswai explained.

Pangani residents say their problems began a few years ago when a 2km concrete buffer wall built in the German colonial era was badly damaged by waves. Sea water poured through into the streets.

A large part of the sea wall has now been completely eroded, and when high tide comes, nearby residents brace for repeated flooding.

But the flooding has also been worsened by clearing of mangroves which once formed a natural buffer against the ocean waves.

Rubera Mato, an environmental engineer at Ardhi University, said mangrove trees - which thrive on salty water - have for years proven effective in protecting against sea erosion.

District authorities have now warned Pangani residents living in flood-prone areas to take precautions, such as moving to higher land.

Rafael Samson, a district natural resources officer, told AlertNet villagers could no longer sleep at night because they are afraid of high waves.

"We have asked them to move their belongings to safer ground, and if they ignore this warning they will be endangering their own lives," he said.

Vice President Mohammed Gharib Bilal visited Pangani in January, telling residents the government was "fully aware" of what was happening and understood their predicament.

"Do not be afraid - we will help you to solve this problem as soon as we possibly can, but you must protect the environment to the best of your abilities," Bilal told a rally.

He assured local people the government was taking steps to address soil erosion on the coastal strip, and would reconstruct the damaged wall to hold back ocean tides.

According to the vice president, the sum of 2.3 billion Tanzanian shillings (around $1.5 million) has been earmarked for the work.

But Costa Magali, a Pangani district welfare officer, blamed the government for delays in releasing the money to rebuild the wall despite knowing about the problem for some time.

A study published last year, commissioned by Britain's Department for International Development, and authored by local and foreign scientists, spells out how East Africa's coastal zone is increasingly threatened by rising seas.

The research, entitled "The Economics of Climate Change in Tanzania", calls for integrated coastal zone management to prevent disasters posed by rising seas.

"The coastal zones of Tanzania contain high populations, (and) significant economic and important ecosystem services. These areas are at risk from sea level rise," it says.

It cites the case of Dar es Salaam, the country's commercial capital, where around 8 percent of the land area, 140,000 people and economic assets worth more than $170 million are located in vulnerable areas. So far, Tanzania's government has not put in place sufficient measures to deal with climate risks, the report said.

"Sea-level rise threatens the tourism industry through damage to tourism infrastructure and loss of property which would reduce the potential economic benefits of tourism," he said.

In Pangani, loss of drinking water - as well as seawater intrusion into homes - may be one of the biggest threats.

Residents in Pangani town are already experiencing severe shortages of drinking water as a result of the seawater intrusions - a problem Mohammed Hamis, a district environmental engineer, links to climate change.

"The quality and quantity of surface water has particularly been affected," he said. Salt water intrusion in the Pangani River has penetrated as far as 8 km inland due to the rising level of the Indian Ocean, Hamis said.

That means fresh water must be pumped to Pangani town residents when the tide is low, or their supply will be tainted with salt water, he said.

"We are now thinking of moving the pump house further upstream to avoid supplying residents with salt water," he explained.

In addition, many small rivers that feed into the Pangani River have become seasonal, flowing only in the rainy season when there is plenty of fresh water, Hamis said. Others have dried up completely.

In some parts of the district, people who get their water from wells are finding that deep wells in particular are becoming increasingly salty, he said.

"Rising sea levels have not spared deep wells. Many of them now produce salt water that is not fit for human consumption," he warned.

Kizito Makoye is a journalist based in Dar es Salaam, Tanzania. This story is part of a series supported by the Climate and Development Knowledge Network.

Next Story
Tagged:
Copyright © 2012 AlertNet. All rights reserved. Distributed by AllAfrica Global Media (allAfrica.com). To contact the copyright holder directly for corrections — or for permission to republish or make other authorized use of this material, click here.