Africa: Are Maternal Deaths a 'Right to Life' Issue? 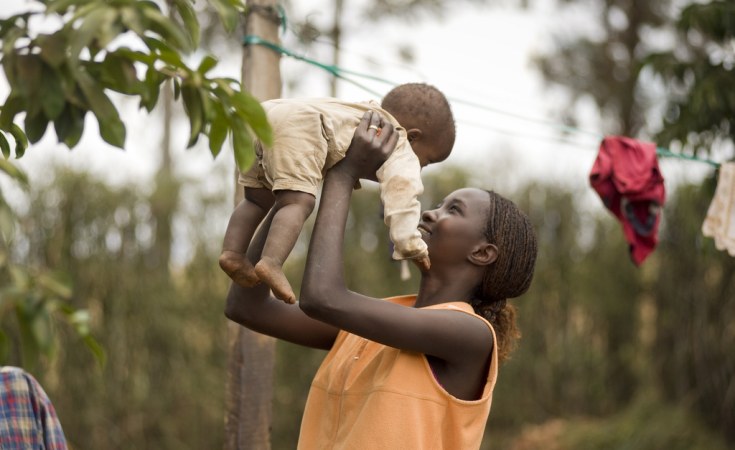 Bill & Melinda Gates Foundation
A mother plays with her young son in the Kenyan village of Mwea.
allAfrica.com
By Tami Hultman

Picture yourself in a room with 30 other women - knowing that one of you will die during pregnancy or childbirth. That's not a concept for a macabre TV show - unless it's reality TV.

Those stark facts are a focus of a World Health Organization report released at the 126th Assembly of the Inter-Parliamentary Union that ended on Thursday in Kampala, Uganda.

The new report hails significant progress towards United Nations Millennium goal number five of reducing maternal mortality by three-quarters from 1990 to 2015. But it notes that only six countries, out of 35 target countries worldwide, are on track to achieve the goal - the worst outlook for any of the eight anti-poverty goals.

The lawmakers' session followed an African regional consultation on mothers and reproductive health convened by Women Deliver and Partners in Population and Development. The policymakers, researchers and advocates were joined by youth activists from 11 countries, who shared information aimed at improving their knowledge and communication skills.

Dr. Fred Sa, a Ghanaian physician, told the attendees that young Africans must start discussing family planning early in their lives. Youth are society's greatest resource, he said, "and we must ensure that they are empowered with the tools and the knowledge they need to lead long, healthy and productive lives".

Worldwide, the number of mothers who die from pregnancy-related causes correlates strongly with access to family planning - a range of services including information and counseling and access to contraceptives.

Across most of Africa, only a quarter of women use contraceptives, compared with rates elsewhere in the developing world ranging from 44 percent in south-central Asia to 67 percent in Latin America, where the maternal mortality rate is six times that of richer regions.

Those stark facts raise the question: is access to family planning services a "right to life" issue for African women? It is a question that echoes around the world - including in the United States, where the race for the Republican presidential nomination has generated heated debate over women's access to contraception.

In the United States, the family planning discussion has become entangled with controversy over abortion and is typically framed as "pro-life" or "pro-choice". In Africa, which leads the world in maternal death rates and where women have a higher rate of unplanned pregnancies than anywhere else, access to contraception is increasingly seen as a life-or-death issue in an acute crisis situation.

inFocus: Are Maternal Deaths a 'Right to Life' Issue?

Previous Story
We Can Defeat Poverty - Melinda Gates
Next Story

We Can Defeat Poverty - Melinda Gates

Previous Story
Tagged:
Copyright © 2012 allAfrica.com. All rights reserved. Distributed by AllAfrica Global Media (allAfrica.com). To contact the copyright holder directly for corrections — or for permission to republish or make other authorized use of this material, click here.