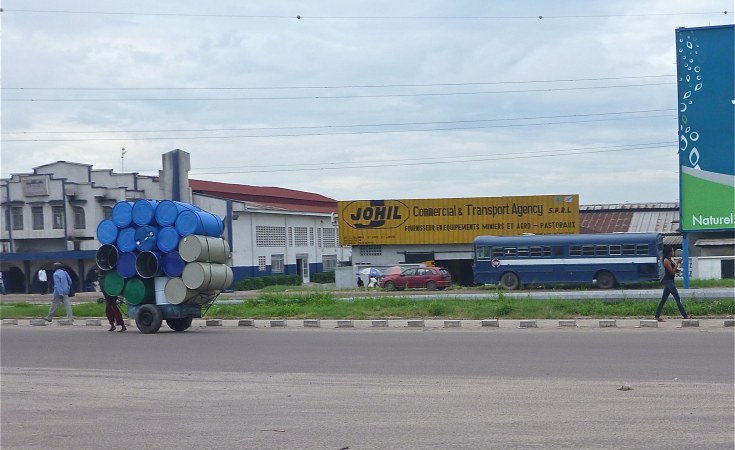 Kinshasa — It begins at twilight, just as the roosters begin to crow, before the sky reclaims the overnight rain. At first there are only a few hundred - the earliest risers, the ones hoping to get ahead of the traffic, those wishing for a jump on the competition. By dawn, the steam rising from the rain-soaked ditches and potholes, the people along the Boulevard Lumumba number in the thousands.

Once the mini-buses, trucks, motorcycles and car taxis have jammed the road, the masses of people heading into town have swollen to the tens, if not hundreds, of thousands: walking, jumping into trucks, tying things down, hoisting them up, holding them in place, limping, carrying, balancing, navigating, shifting a baby on their backs, holding a child's hand, peering through the cassava leaves bundled on top of their heads, urban cowboys yelling from taxi buses, cash blooming in their fists, a man dressed up in a chartreuse shirt and polka dot tie, carrying a portfolio, another holding an umbrella in case there is an afternoon thunderstorm. Footsteps sound on pavement; mud sucks at shoes.

Twenty years ago, a pro-democracy demonstration called the March of Hope brought thousands onto the streets of Kinshasa. Now, a march of a different sort plays out six days a week in this city of 10 million, as masses of people head downtown to earn a living or seek a means to do so.

I first came to this capital city in January 1992, a few weeks before what was formally organized by church leaders as the March of Hope. I lived in the city for five months and then returned intermittently throughout the 1990s while based in Abidjan, Cote d'Ivoire, as a freelance journalist. My last trip to Kinshasa was in 1997 for the end of Mobutu Sese Seko's 32-year despotic rule. Known as Zaire under Mobutu, the country became the Democratic Republic of Congo (DRC).

I recently had the chance to return to Congo, on assignment for AllAfrica to do a story on maternal health, and I jumped at it. I wanted to see how much had changed in the past two decades. Demonstrators in 1992 were marching for democracy and the better life they thought it would bring. Where, I wanted to know, was Kinshasa's hope now?

I didn't find the answer on the rehabilitated Boulevard 30 Juin - an eight-lane highway that drivers treat like a speedway. (Just ask the head of the emergency department at the main hospital.) I didn't find it in the many new hotels and high-rises in the city or in the brand new western-style supermarket downtown. I didn't find it on the giant billboard advertizing the new Justice Ministry offices that are to be built with the help of foreign aid. I didn't find it with the recognition that all the calendars I saw in government offices were for 2012, unlike previous visits when they were often out of date, serving mainly as artwork. I didn't find it discussing the most recent, problematic elections. And I didn't find it around the new fountain downtown or the one near the stadium, as aspirational and refreshing as they looked.

No, the hope I found was in an unlikely spot: on the Boulevard Lumumba.

The morning bustle on the boulevard is the audible manifestation of se débrouiller - the French word that means "to get by" or "to manage". The Kinois, as the residents of this city are known, are experts at it. And as these things go, it is both their greatest strength and their greatest weakness. Perhaps if they hadn't been so good at getting by and making do, they would long ago have gotten rid of the corrupt leaders who forced them to rely on their débrouillardise, or resourcefulness.

Eighty percent of the country's workforce labors in the informal sector. Ask them how they deal with the many problems they face - joblessness, conflict in the east, endemic malaria, scant running water, poor sanitation, health and education they can barely afford, the rising cost of food and transportation - and they're like to say, "Je me débrouille." I get by; I manage.

But it's more than that isn't it? I get by wearing 10-year-old sandals. I manage the household budget (or I'm supposed to). Kinois, I thought, must have a unique idiom - possibly a local word, a Lingala word - for what they do. There is one term, Article 15, which encompasses ingenuity and state-sanctioned graft. But I was thinking of something a little different, something more physical, because being a Kinois is downright hard work. Ask the man hauling 18 oil drums on a wheelbarrow down the street.

These efforts are not "managing" or "getting by" they're much more than that. So I asked my Kinshasa assistant, the efficient and pragmatic Emery Makumeno, if there was a Lingala term. And, he said, to some degree, there is: kobeta libanga. It is literally translated as "breaking stones" from the time of forced labor under the Belgian colonizers. It is often used to refer to Congolese in the Diaspora who will work any job to send money home. It is also used to describe the work, efforts and challenges Kinois will undertake to survive in their city. Je me debrouille rolls off the tongue easily, but kobeta libanga is worthy of a ballad.

Kobeta libanga plays out the length of the Boulevard Lumumba as more people are forced to walk several kilometers into town because of frequent traffic gridlock caused by road works. Named after independence leader Patrice Lumumba, the boulevard is the main artery leading to Kinshasa from beyond the international airport, Ndjili.

At the end of the runway, and visible from the air, is the city's version of a potter's field. There's no telling how many people have been buried there: headstones are broken, stolen, grown over. It is one of the cheapest places around to inter a body. There's another cemetery, downtown, that has been taken over, the precious soil now used as a community garden for people to plant subsistence crops or a few surplus vegetables they can sell at the market. I asked Emery if people had much success hawking vegetables nourished by decomposing bodies. "I don't think they tell anyone," he said.

Passing the airport on the right, the same side as the Congo River, the boulevard abuts the neighborhoods Masina I, II and III. I don't know why these impoverished quartiers weren't given distinct names. Perhaps by the time people had reached that far from the city center, they just plain ran out of ideas.

Health workers I visited at the Roi Baudouin I Hospital Center in Masina I, said the Masinas are among the poorest and most densely populated neighborhoods of Kinshasa. Wikipedia says Masina (it didn't say which one, or all three) had "recently become a desirable area in which to live and has a large, growing population".

I think someone should tell the Wikipedia editors that just because a lot of people live in a place doesn't necessary mean it's desirable. Much of the Masinas are on a wetland. Malaria is endemic. The disease is the DRC's biggest child killer, claiming the lives of some 180,000 children under the age of five per year, according to Unicef. A wet, warm, overcrowded environment is prime for malaria transmission.

Further down, the Wikipedia listing says this: "The urban area reaches population densities comparable to those of other municipalities in the heart of Kinshasa (about 50,000 inhabitants per square kilometer)." To get a perspective on just how many people live in the Masinas, take into account that New York City has a population density of about 27,000 people per the equivalent of one square mile, or 2.6 square kilometers, according to the city's official website. So, for those of you who are math challenged like me, that means nearly double the number of people in Kinshasa live on less than half the equivalent area. And most don't have running water, proper toilets or trash disposal.

If that wasn't daunting enough, the United Nations estimates that between 2010 and 2020 Kinshasa's population will have grown by 46 percent. That means the challenges for Kinois, the competition for resources, the pressure on an already overburdened infrastructure and the sheer effort it will take to get into town will become that much greater. The government of President Joseph Kabila deserves credit for making improvements to Kinshasa's main arteries, such as the Boulevard Lumumba and the Boulevard 30 Juin. But little work has been done in the most populous neighborhoods, such as the Masinas.

Much has been written about DRC's resources - it's gold, copper, diamonds, rubber, forests - and how transparent use of them could turn the nation around. The Congo River - the world's second largest river by volume - has enormous hydroelectric potential. But as it is now, DRC ranks near the bottom of United Nations indicators for human development.

It is true that the country could be an economic giant in sub-Saharan Africa and that it holds enormous promise. The World Bank predicts an annual economic growth rate of seven percent over the next two years. But growth cannot reach its full potential without the work of the Congolese people - the nation's greatest resource, its best hope.

As I wrapped up my stories from Kinshasa I was also finishing up some of the escapist reading I had bought to pass the many hours spent on planes and in airport terminals. I found this passage at the end of "Sole Survivor" by Dean Koontz.

"Only the human spirit can act with volition and consciously change itself; it is the only thing in all creation that is not entirely at the mercy of forces outside itself, and it is, therefore, the most powerful and valuable form of energy in the universe."

The government in Kinshasa should take note. 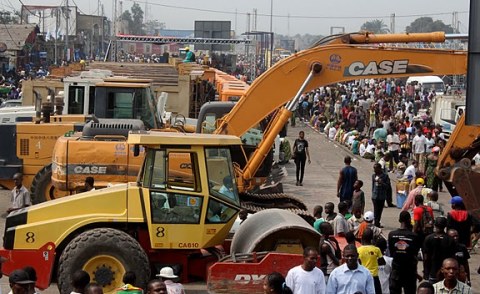 March of Hope
Tagged:
Copyright © 2012 allAfrica.com. All rights reserved. Distributed by AllAfrica Global Media (allAfrica.com). To contact the copyright holder directly for corrections — or for permission to republish or make other authorized use of this material, click here.