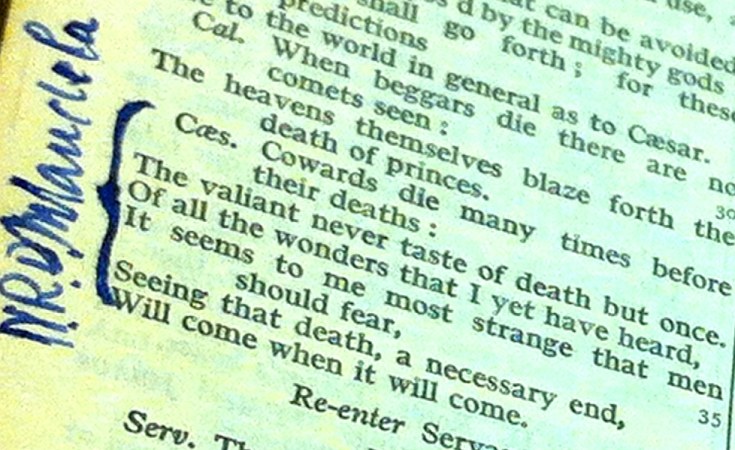 London — As the focus of the world turns to London for the 2012 Olympic Games, one of the most remarkable stories of South Africa's freedom struggle takes centre stage at the British Museum's Shakespeare: Staging the World exhibition.

The exhibition features a unique edition of the Collected Works of Shakespeare – known as the "Robben Island Bible"– named for the prison off the coast of Cape Town where black political prisoners were jailed under apartheid.

The volume is marked with highlighted quotations from Shakespeare's works which were selected and signed by more than 30 prisoners. It became a treasured text in the prison, providing a way of discussing political and moral issues around the anti-apartheid struggle and what might follow the overthrow of the system.

In 1977, Nelson Mandela highlighted a soliloquy from Julius Caesar, Shakespeare's epic play about tyranny and conspiracy.

Cowards die many times before their deaths;
The valiant never taste of death but once.
Of all the wonders that I yet have heard
It seems to me most strange that men should fear;
Seeing that death, a necessary end,
Will come when it will come.

The Robben Island bible was disguised as the Hindu scriptures by its owner, Sonny Venktrathnam, to avoid its seizure by the prison authorities, who banned any literature in the prison and had impounded the book after it was sent to him by his wife, Theresa.

Venkatrathnam later persuaded a sympathetic warder to release the book when he insisted that it was "the bible by William Shakespeare." The Venkatrathnams, who now live in Durban, have safeguarded the "bible" since Sonny Venkatrathnam's release from prison in 1977, and they are visiting London as guests of the British Museum for the launch of the exhibition.

The "bible" will be exhibited in London for the first time from July 19 to November 25 at the British Museum and is expected to be viewed by upwards of 200,000 people during the British summer.

" Somehow Shakespeare always had something to say to us," Kathrada told the writer Anthony Sampson in the authorised biography of Mandela.

The lines which Sisulu chose to highlight were Shylock's Still have I borne it with a patient shrug,/ For sufferance is the badge of all our tribe.

Kathrada chose Henry V's Once More Unto the Breach and Govan Mbeki If Music be the Food of Love from Twelfth Night.

As interesting as the individual choices was the fact that some prisoners' passages became akin to calling cards, and continued to have an influence on their lives beyond the confines of prison.

Professor Isabel Hofmeyr of the University of the Witwatersrand in Johannesburg said the style of schooling given to Mandela and his colleagues at mission schools "taught the English language intensively, often requiring pupils to recall large passages by heart."

Alexander Kerr, Mandela's teacher at the University of Fort Hare, believed that all pupils should be familiar with the works of Shakespeare and the British poet,Tennyson, and he taught "with a vividness which made Shakespeare seem totally relevant to contemporary Africa."

She said Shakespeare also offered "an allegorical resource through which to comment on the oppression of apartheid South Africa" in sharp contrast to the "anodyne and apolitical" teaching of English literature at most mission schools.

" Shakespeare, in short, became a way of talking about politics."

Dr Dora Thornton, curator of the Shakespeare exhibition at the British Museum said that the Robben Island Bible was one of the most powerful examples of Shakespeare's enduring legacy and reach 400 years after his writings.

" The book was used in the same way as the bible has been used down the ages: as a constant reference for debating the moral issues of the day," she said.

Earlier in July, drama lecturer and playwright Matthew Hahn presented a staged reading of The Robben Island Bible at the Southbank Centre in London, drawn from extensive interviews with eight surviving prisoners and interwoven with extracts they had chosen from the collected works.

Interviewing the former prisoners made a profound impact on Hahn. He found them to be "the most gentle of men".

The most popular choices for the 32 prisoners who highlighted their favourite passages were from Hamlet, King Lear, Julius Caesar, The Tempest and As You Like It.

Mandela and other leaders of the African National Congress such as Thabo Mbeki and Chris Hani quoted frequently from Shakespeare in their speeches after they returned from exile in 1990 ahead of the first democratic elections in 1994.

"Shakespeare became more politically relevant than the Bible or Marx," Anthony Sampson wrote in 2001. "Successive generations of African leaders saw his plays as an inspiration for their struggle and for humanity."

The Royal Shakespeare Company (RSC) is currently presenting Julius Caesar with an all-black cast at venues across Britain as part of the Cultural Olympiad, Britain's cultural out-reach during the Olympics.

The play, the RSC's first all-black production, has strong resonance for Africa. Gregory Doran, artistic director of the RSC, said in an interview that Caesar's assassination raised questions today about the way tyrants were removed from power and what and who would take their place.

Julius Caesar was first translated into seTswana by the South African scholar and author Sol Plaatje (1876-1932), a leading intellectual in the ANC, and published posthumously in 1937.

In 1963, Julius Nyerere, the father and first president of Tanzania, translated the play into Swahili.

" Julius Caesar had more impact than any other play," wrote Sampson." But in South Africa the play had a deeper resonance for it vividly described how an oppressed people can realise their potential against tyranny and escape from their sense of inferiority."

In his book The Reading Revolution: Shakespeare on Robben Island, South African author Ashwin Desai noted how Mandela's quote from Julius Caesar must have taken him back three decades to 1944 when he was instrumental in drafting a manifesto for the ANC Youth League, campaigning for a more militant African nationalism.

Mandela penned a quote from Cassius in Julius Caesar:

The fault, dear Brutus, is not in our stars … But in

ourselves, that we are underlings.

Mandela's most dramatic resort to Shakespeare came in 1964 when he was facing the death penalty in the Rivonia sabotage trial. Desai said that Mandela recalled drawing on the words from Measure for Measure:

Be absolute for death; either death or life

Shall thereby be the sweeter

The acclaimed South African actor, John Kani, who served time in jail for his resistance to apartheid, is as passionate about Shakespeare as Mandela and his colleagues. He said in a 2006 interview that at the age of 16 he was fascinated with the lyrical sounds of a Julius Caesar transformed by the click sounds of isiXhosa.

"Shakespeare's words paint pictures in glorious colour in my language. They were written by a man whose use of words fits exactly into Xhosa," said Kani. "When I first encountered Shakespeare as a boy, I read every word this man had written. To me, he is like an African storyteller."

John Battersby is UK country manager of Brand South Africa and a former newspaper editor and foreign correspondent. On July 3 Brand South Africa co-sponsored the Robben Island Bible event which was programmed by the Southbank Centre and the Nelson Mandela Centre at the Museum for African Art in New York City. Shakespeare Staging the World opens at the British Museum on July 19 and runs to November 25.

Tagged:
Copyright © 2012 allAfrica.com. All rights reserved. Distributed by AllAfrica Global Media (allAfrica.com). To contact the copyright holder directly for corrections — or for permission to republish or make other authorized use of this material, click here.