Africa: Behind the Scenes of the Nation's Anti-Homosexual Politics 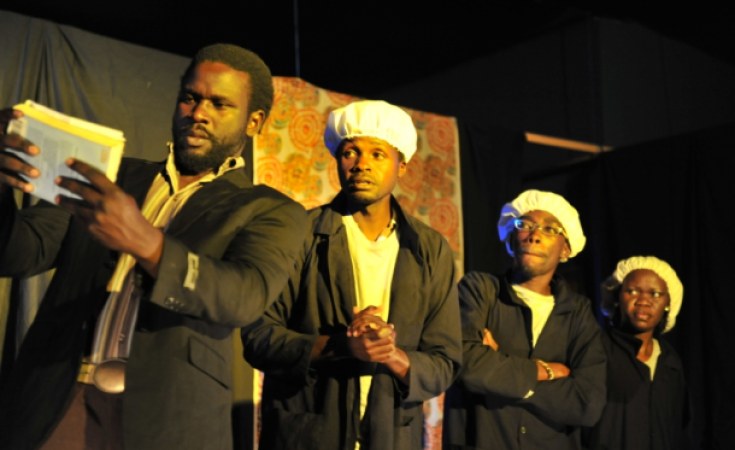 A play suggesting there may be hidden agendas behind politicians' anti-gay rhetoric has been banned.

Since Ugandan MP David Bahati proposed an anti-homosexuality bill in October 2009 that included provisions for capital punishment for homosexuals, Uganda has earned a reputation as one of the most homophobic countries in the world. Media and arts regulators lived up to that billing in August by banning The River and the Mountain, a play that charts a gay man's difficulties confronting intolerance in Ugandan society.

However the most controversial aspect of the play is not homosexuality per se, but rather the suggestion the work makes that politicians and religious interests may have manufactured a viciously anti-gay climate in Uganda to further their own agendas.

The River and the Mountain was due to run at three venues in Kampala from August 17-26. However on August 16, the day before the opening, the Ugandan Media Council informed producer David Cecil that it would require seven working days to review the script and grant clearance for the play to be staged. In a letter copied to the Minister for Ethics, the Commissioner of Police in Charge of Media Violations and the Central Police Station, the Media Council wrote that "in the meantime this play is not to be staged in any theatre or public place in Uganda".

The experienced cast of The River and the Mountain said that such a demand for clearance was almost unheard of in Ugandan theatre, but Secretary of the Media Council Pius Mwinganisa insisted that the requirement was standard practice.

But Ethics Minister Simon Lokodo told Think Africa Press that he would not allow the play to be staged because "it makes statements that are not welcome". The ban was in place he said because "the play is justifying the promotion of this abomination [homosexuality] in Uganda". He added that he had decided, in conjunction with the Media Council, to investigate the individuals behind the play. "If these investigations reveal that there was intent to promote homosexuality in Uganda, they will be dealt with, with criminal prosecution if necessary", he explained.

Central to The River and the Mountain is the implication that anti-gay sentiments have been, to some extent, cynically manufactured by Machiavellian politicians and religious leaders. When asked about this, Lokodo refused to discuss the suggestion that Bahati launched his anti-homosexuality crusade as a means for furthering his political career and the interests of evangelical backers from the US. Bahati was unavailable for comment.

Question marks have been raised, however, over the timing of the introduction of the anti-homosexuality bill, which coincided with some of the first public questioning of the terms of the oil deals signed by the Ugandan government with Tullow Oil and Heritage Oil & Gas. These deals would prove extremely contentious over the following years, but the controversies - potentially highly damaging to the ruling National Resistance Movement party of which Bahati is a member - were largely ignored by an international media focussing on the anti-homosexuality bill which also made Bahati famous.

The oil deal brought further controversy with accusations of corruption flying in from both parties to the contract and towards the end of 2010, Tullow Vice-President for Africa Tim O'Hanlon was forced into an unconvincing retreat after a Wikileaks cable indicated that he had accused Ugandan ministers of accepting bribes. At that time, however, international media attention had honed in on the story of the Ugandan newspaper publishing images of homosexuals under the headline "Hang them". A few months later in January 2011, gay rights activist David Kato was murdered.

Bahati has been linked by journalist Jeff Sharlet to 'The Family', a secretive American evangelical political group that wields a powerful influence over a number of lawmakers in Washington, advising senior government figures in its 'C Street House'. Various news reports have identified American anti-gay activists giving encouragement and support to the anti-gay lobby in Uganda.

In The River and the Mountain, an American preacher comes to advise a would-be politician attempting to stir up anti-homosexual sentiment in order to ride to power on a wave of intolerant, sensationalist rhetoric. The preacher helps design the campaign, including coming up with a catchy song title and bragging: "Before I was called, I was in advertising".

The River and the Mountain playwright Beau Hopkins says that this was a humorous means of drawing attention to how the debate over homosexuality is manipulated in Uganda. "Western human rights groups are funding the LGBT activists - that's fine, of course, they need all the help they can get - while US religious interests are funding the anti-gay lobby. The cashiers on both sides are Western," he explains. "I wanted to show the essentialising power of this rhetoric, which is a western ideological battle being fought on Ugandan soil. Ultimately, Christianity was brought here by the West, but now it is seen as so personal, essential and national. People say 'homosexuality is wrong in all African societies'."

Despite Lokodo's claim that The River and the Mountain promotes homosexuality, the actors insist that the play only aims to open up space for discussion. While the Media Council's ban meant that the three performances scheduled at the National Theatre in Kampala were cancelled, the play was performed - illegally, according to Ugandan authorities - at two smaller locations in Kampala.

"Homosexuality is a hot topic in Uganda and it will take time for people to accept this kind of public debate," commented audience member James Mugisha, adding "for me, as long as homosexuals keep their activities private I don't have a problem". Francesca Tebitendua agreed, saying, "If homosexuals keep things behind closed doors, it's okay". While not fully accepting of homosexuality, very few people were willing to castigate it in Bahati's terms.

Some also expressed sympathy for the plight of the gay community in Uganda. "Homosexuals are used as scapegoats by politicians," said a man on condition of anonymity. Many Ugandans in the audience, and the actors themselves, reiterated this point. "All the talk about homosexuality distracts from the real issues," said actress Aidah Nalubowa, who plays a journalist. "People are just taking advantage of the issue." Mpaata Rogers William Otako, who plays a fire-and-brimstone pastor, agreed, commenting, "We have bad roads, bad hospitals, but none of that is caused by homosexuals. The politicians need to focus on the real problems."

Look back in anger

For now, though, it appears that the emotive issue of homosexuality will continue to be used as a political football. Bahati's bill, briefly abandoned in August 2011 but resurrected at the start of 2012, remains at the committee stage in parliament, not yet been debated and voted on by MPs. It will likely stay there for some time as the Ugandan executive attempts to negotiate a path between placating the anti-gay lobby on one side and the international community on the other.

While the extremist rhetoric of Bahati and his supporters may not represent the opinions of most Ugandans, it will continue to be heard, thanks to domestic political expediency, but probably not acted upon for fear of upsetting donors. But, as David Kato's murder proved, unchecked rhetoric can nevertheless have devastating consequences.

Peter Jones is a freelance journalist working in east and central Africa, with a particular concentration on eastern Congo. He has written for various international media outlets, including the Guardian, Radio Netherlands Worldwide and Africa Confidential. His focus is on African politics and on natural resource governance and management. He is based in Kampala, Uganda.

Producer of Nation's First Gay Play Could Be Jailed