Africa: Govts Must Lay Foundation for Private Investment in Agriculture 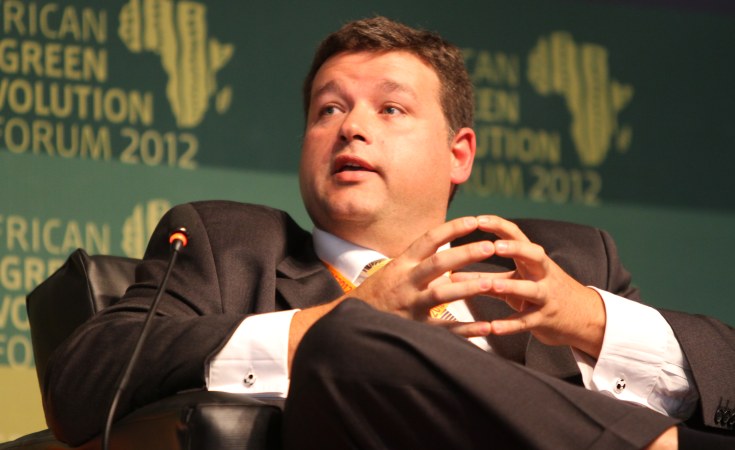 Johan Steyn, Cargill's country director for the Middle East and Africa, sat down with AllAfrica's Samantha Nkirote McKenzie and Lauren Everitt at AGRF to explain how corporations can support smallholder farmers. Steyn is confident that private investment can improve yields, but says that property rights and government policies must lay the right foundation.

Could you tell us a little bit about your role with Cargill?

I'm based in Johannesburg, South Africa, and my responsibilities are for all of Cargill's investments and operations in Africa and the Middle East in terms of the grain, oil, seeds and cotton businesses.

I've been with the company for about 16 years, all of it based out of South Africa. But I've been traveling extensively through all of Cargill's business areas.

The aim of AGRF is to discuss the problem of feeding a growing global population. What part do you see private investment playing in that?

Actually, if you look at the whole question of food security, it is not a question of 'Do we produce enough calories in the world?' We do.

If you look at the Food and Agriculture Organisation (FAO) figures there's about one billion people that are malnourished. To feed them we need about 30 million tons of grain. And if you look at the biofuel industry today, that's about one-sixth of what they use in the industry. So it's not a question of 'Do we grow enough food in the world?' It's a question of 'Do we have the right policy and the right process, in terms of feeding the world?'

So where do I see Cargill playing a role? Cargill is a corporation. Our vision is very much to be the global leader in nourishing people. We participate in the entire supply chain, from supporting the farmers, both commercial and small-scale, through to processing food ingredients and value-add products. So I really see Cargill, as a private entity, participating in all of that and bringing it all together uplift the smallholder farmers, to incentivize them to continue to grow commodities and ultimately to provide affordable, nutritious and sufficient foodstuffs to everyone.

Could you tell us more specifically about the support that you provide to smallholder farmers?

In the different businesses in Africa, we focus on the cocoa industry, as well as cotton and grains. We serve hundreds of thousands of smallholder farmers. In Zambia we have a customer base of 100,000 smallholder farmers that we provide extension services to. So we provide all of the inputs: fertilizers, chemicals and, very important, the training on how to apply those.

We do a lot of work in educating the farmers on how to produce, but also providing them access to the global markets to ensure that they have a market-related and fair price, as with any other commercial farmer.

Since you started work with them have you seen an improvement?

Yes. We started the project - the Competitive Africa Cotton Initiative - three years ago with public and NGO partners. The objective was to improve yields over three years by 35 percent. We have completed year two in the past season, and the reported yield improvement was 34 percent, so it all but met the targets within two years. There have been various other benefits to the farmers in terms of providing them with better infrastructure, providing them with access to planting machines and various other tools.

I think one of the key inhibitors to investment in agriculture, whether it's smallholder farmers or commercial farmers, is the rule of law and property rights. To encourage private investment into agriculture, into smallholder farmers, the farmer has to have the certainty of property rights ? to be very comfortable that they have full title. So that's one of the big challenges that we have.

Some clear examples where we've been involved is in Zambia. Zambia has become a major exporter of grains over the last three years because policy is so investment friendly. They work on a 99-year lease basis, but any land improvements that are done are under the ownership of that farmer. So they can transfer the value that they've added to the land to the next person.

If you look at the quality of soil and the availability of water it is no different than some of the neighboring countries like Mozambique, Malawi, Angola, but some in some of these countries you have more challenges around land rights at this stage. If we can get over that hurdle then I think we can very soon see that belt become a major player in grain production.

It's about creating policies and an environment that are healthy for investment.

In that respect do you have any initiatives that involve working directly with governments? How do work with them and how do you see that relationship?

We have two channels. Firstly, we have our corporate affairs team that has constant interaction with governments. We try and share our view and how to improve agriculture in any specific region. We are currently starting up a project in Mozambique through the G8 Grow Africa initiative, where we've been very closely involved with various partners, such as USAID, with the local government and different departments to try to find a way to encourage investment.

What do you hope will be the greatest take-away from this forum?

You're the business unit leader for all of Africa and the Middle East. As you say, there is wide diversity in this region. Have you found any policies that have worked across the board? How do you deal with the challenge of regional differences?

No. It's very unique. If you look at North Africa and the Middle East, it's a very different culture and a very different setup. Because of the rainfall it's an arid climate and will remain an importer.

If you look at a country like Egypt, it's the single biggest wheat importer in the world. Yes, the Nile Delta has the biggest yields, but unfortunately it's a very small area. And then you look at sub-Saharan Africa, and it's a region that's got the potential to become a major exporter.

In terms of policy that's consistent across the continent, I've not seen anything that I can say.  There are best practices all around but nothing consistent.

Your background is in accounting and finance. More and more we're seeing the merging of finance with agriculture. Could you explain this relationship?

What my background brings is probably a good economic understanding of decision making.  As I said earlier, it's not a case of the world not producing enough grain or enough foodstuffs. It's a case of, to quote Greg Page, our CEO, it's a case of economic famine. It's about having people be able to afford foodstuffs. So it's how can we create an environment where we can produce safe, affordable and nutritious food for the entire globe?

It's bringing that kind of financial background, or financial theory into practice on the continent.

Some people view private sector involvement in government and NGO initiatives with some skepticism. Critics say this involvement is motivated by profit and self interest.  How do you answer those critics? Does it matter if business in the region is strictly for profit or not?

Ultimately Cargill is a privately owned company. We have a variety of stakeholders. We have shareholders, we have employees, we have governments and we have the communities wherein we work and operate. Without the communities, who are our customers and our suppliers, Cargill wouldn't exist.

So it is very important to us. As I said earlier, Cargill's vision is to be the global leader in nourishing people. We are very committed to that vision. Yes, financially it has to make sense, but if you look at some of the forecasts for 2050 on what the global population is going to be and how we're going to feed this population, I think you have to have a long-term view on Africa.   The only way you can do that is through different initiatives, by pulling in NGOs, by pulling in the private sector and involving government because policy setting is going to be critical to make this a success.

Tagged:
Copyright © 2012 allAfrica.com. All rights reserved. Distributed by AllAfrica Global Media (allAfrica.com). To contact the copyright holder directly for corrections — or for permission to republish or make other authorized use of this material, click here.