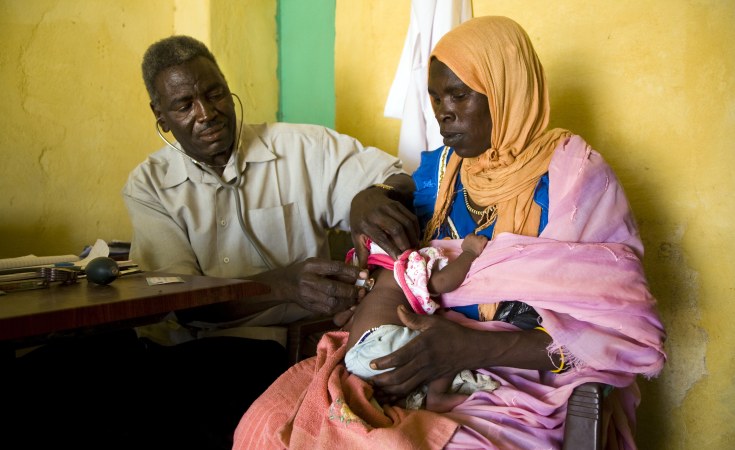 UN Photo/Albert Gonzalez Farran
A mother and her infant at a primary healthcare facility.
allAfrica.com
interview

Atlanta — A new program to send doctors and nurses as volunteers to Africa is gathering momentum and aims to fill a training gap among Africa's medical workers. The doctors and nurses will provide technical support to clinician educators, as well as provide direct medical care. The Global Health Service Corps  will initially send volunteers to Tanzania, Malawi and Uganda next year in partnership with the Peace Corps. Dr Vanessa Kerry, CEO of the non-profit service corps and the daughter of U.S. Democratic Senator John F. Kerry, spoke with AllAfrica's Cindy Shiner on the sidelines of the American Society of Tropical Medicine and Hygiene's 61st annual meeting being held in Atlanta.

How did the Global Health Service Corps come about?

On the U.S. side there had been a growing interest in global health. The commitment and understanding of the need for health equity has just expanded enormously, and so we're seeing this rise of people interested in really engaging in reducing health disparities, creating health equity and improving global health around the world.

I was in residency with a lot of doctors and also got a chance to speak with a lot of nurses who were very interested in serving but didn't have the ability to serve because there wasn't a structured program. And there wasn't the financial wherewithal to be able to serve, because if you graduated from medical school you had an average of 150,000 dollars of debt. Equally, the U.S. government started to hear a cry for increased technical capacity to help them in terms of how the U.S. government engages with countries to help build health system strengthening, increase technical capacity and build up human resources for health.

And so our hope was to bring all these things together to provide a structured program for people to participate on the U.S. side so they didn't just go willy-nilly and serve and not be a burden to the countries where they were going, and at the same time trying to meet the targeted needs of our partner countries.

The real moment this all suddenly exploded was that a colleague and I discovered that there would be four Peace Corps directors speaking at a forum. We went and asked the would they be willing to send doctors and nurses abroad as medical educators, and all the directors, including the current director, said it's a great idea. And that began the conversations that led to this partnership with the Peace Corps. Now we're working directly with the countries where we're launching to discover what their needs are and make sure that we meet their needs and put the appropriate people in the appropriate place.

Taking into account the problem with brain drain in Africa, are there African medical workers who have come to the United States who are seeking to be part of your program to return home and help?

Because it's a Peace Corps program you do need to be a U.S. citizen. But we are thrilled that a number of our applicants are from the African Diaspora and are interested in going home. They want to serve; they want to give back to the community. Being a public-private partnership our hope is - and if we're successful and we get this model right - we might be able to support non-U.S. citizen African doctors to be able to work in the countries and to stay and to participate in building up their public health systems. We, as a private partner to this endeavor, have that kind of flexibility to augment the program in that way. We're just not there yet. We need to get this right with our current partnership.

Does the partnership support research as well?

We're not directly looking at research. I think there are robust programs for research and research collaboration. But there is not as much focus for clinical education, clinical scale-up, nursing, at the leadership level for nursing, scaling up the education system to continue an academic pipeline of health professionals, and that's the area we're targeting.

The clinical piece is missing on both sides. The scope of the problem is so big, and we are so far behind in addressing the problems and partnering to address the problems appropriately. I think if you look at the history of aid, for a long time it was "we're going to fix this", and then it was "we shouldn't be fixing it, we should be fixing it in partnership with you", and then it was "we're going to give you money to fix it" and then there was "wait, there's not the technical capacity".

So I think part of it is reflecting as we understand what the needs are and how to grow.

All this money was given to Pepfar (the President's Emergency Plan for Aids Relief). And it was a couple of years after that we realized we don't actually have the health system and human resources for health to implement Pepfar. And that was sort of the recognition that there needed to be more research to understand the problems and that there needed to be more technical capacity and training to create the workforce that could actually implement Pepfar.

So I think it's more an issue of catch-up. It's interesting to me that the nursing profession has not had as much focus on the clinical systems education because over 80 percent of health care is provided by nurses.

And nursing shortages are massive. So we're very proud to be part of an effort to scale that up.

Do you have any specific focus on maternal and child health?

How did you choose the countries where you will be working?

institutions and African institutions. And so we went to countries that had those programs because we knew the countries were already thinking about medical and nursing education, that there was going to be a great collaboration and partnership around addressing new innovations in these areas.

That narrowed us down to about 10 countries. Then we wanted to pick English-speaking countries just to start because this is a new program and a new model and we wanted to try to help reduce the barriers to some degree. And then it became a series of small things about how many other programs were in the country, what the Peace Corps country offices were and Pepfar focused countries.

We're just thrilled to be in partnership with these countries to help come up with a common solution. It's been an honor to begin to build this program. We have a lot to learn but we're excited.

Previous Story
Next Story
Counting the Costs of Brain Drain

Counting the Costs of Brain Drain