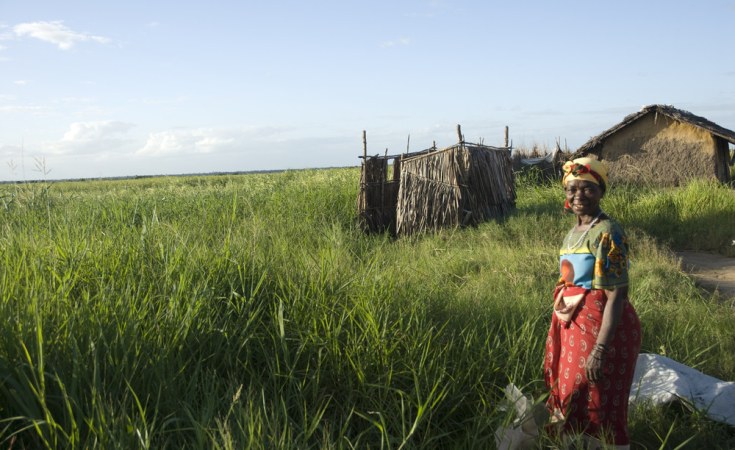 Eva-Lotta Jansson/WaterAid
A woman points out the area where people are forced to answer the call of nature.
allAfrica.com
By Sue Valentine

There is no shortage of jokes and a long list of euphemisms when it comes to talking about toilets.

But for the staff of the Pollution Research Group (PRG) based in the chemical engineering department at the University of KwaZulu-Natal (UKZN), toilets are a serious business. Particularly so when you are part of a team attempting to re-invent the toilet as we know it - a 200-year old design that depends on an infinite water supply and extensive sewer system.

Flush toilets are available only to a fraction of the world's population and are unsustainable, especially in water-scarce countries.

"We have never been great advocates for the use of water for sanitation," says Professor Chris Buckley, an international sanitation expert and head of the PRG. The flush toilet uses "vast quantities of water to disperse small quantities of faeces", which are then dissolved and circulated throughout the world.

Some 2.6 billion people - 40 percent of the world's citizens - do not have hygienic toilet facilities, exposing them to a perpetual cycle of potentially fatal diseases, such as cholera and diarrhoea. According to the World Health Organization, improved sanitation can produce up to U.S. $9 for every $1 invested by increasing productivity, reducing health care costs, and preventing illness, disability and early death.

Last year, in an effort to spur innovation, the Bill & Melinda Gates Foundation launched a multimillion dollar "Reinvent the Toilet Challenge" and invited 22 universities around the world to submit proposals to invent a water-free toilet that needs no sewer connection and costs less than five U.S. cents per day to use.

"Traditionally, sanitation hasn't drawn innovative people into the field because it's the same old thing that's been going on since Victorian times," says Buckley. "This is an opportunity to think of it completely differently, and apply technologies which might have been used in completely different situations, to some very basic needs."

The PRG was one of eight finalists in the Toilet Challenge competition in August - the only team from an African university.

Although the group did not win, Buckley remained optimistic about the prospects for future use of new toilet technology. It's comraderie - everyone is seeing the goal," he said. "The people who don't have sanitation, those are going to be the winners.

It's not the individual team. The African expression I like to use is, 'If you want to go fast, go alone, if you want to go a long way, go together as a group.' And I think it's very, very true."

A key advantage enjoyed by the University of KwaZulu-Natal team is their longstanding working relationship with the eThekwini municipality, which provides water and sanitation services to more than 3.5 million people in the greater Durban area - many of whom live in informal settlements.

These real-life conditions - often just a short drive away from the university - provide the PRG with first-hand knowledge of the challenges they must overcome to design a user-friendly, effective and efficient toilet.

Building a process that works requires an understanding of the substances involved and how to move urine and faeces safely, without using water, into some kind of repository where it can be recycled into useful products.

Three students - Lungi Zuma, Stuart Woolley and Donovan Horstmann - have been studying for their Master's degree in chemical engineering.

Protected by gloves and goggles they have researched the chemical properties of faecal sludge and urine. Put more bluntly, it's about assessing the thickness and stickiness of faeces, and how to separate out valuable nutrients such as nitrogen and phosphorous from urine.

"My findings will enable designers and engineers to design equipment for emptying pit latrines, and to decide how best to treat the sludge so it can be used as fuel or fertilizer in later processes," said Zuma, who is bemused by how inquisitive, and sometimes squeamish, people are about her work when she removes old, dry sludge from latrines.

"It might seem very disgusting and something that people don't want to think about, but at the rate at which people are moving into cities and peri-urban areas, it is something we need to deal with," she said. "If we don't deal with it now it's going to become a bigger problem later."

"You just have to live with the banter," said Woolley about the quips his friends make. "This project is very exciting for me. In terms of actual toilet technology, nothing has been done for the last 200 years. If you think how far cars have come, how far industry has come, we've got a lot of catching up to do to make the toilet a modern invention."

He said his research is on "faeces data" - how it flows, what sort of pumps are needed to move it around, what kind of drying characteristics it has, and what kind of energy can be obtained when it's burned.

And because there is no substitute for the real thing, Woolley has enlisted more than two-dozen students who anonymously deliver faeces in transparent plastic lunchboxes on a regular basis. On each one is given a number, as well as a date and time, before being stored in neat rows in the laboratory's walk-in fridge.

Horstmann's research focuses on urine - and its potential as a source of raw materials. "It hasn't been done before - processing urine on any type of industrial scale," said Horstmann. Instead of synthetically produced urea being used in a wide variety of industries, the salts and nutrients contained in urine could be put to good use rather than consuming resources to transfer it to sewerage plants.