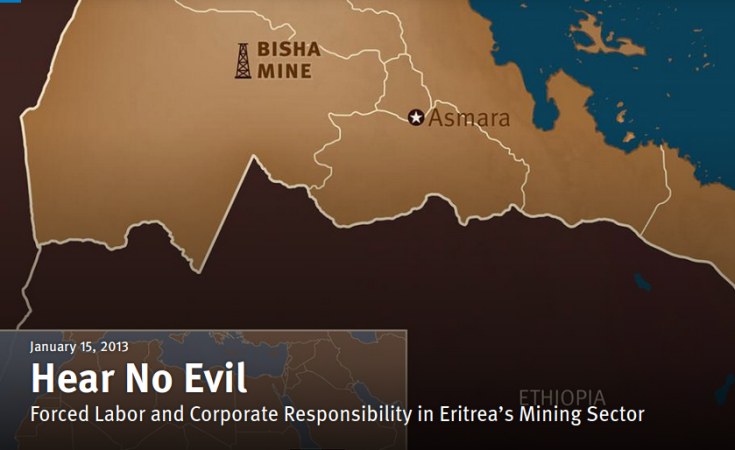 HRW
When Nevsun began building its Bisha mine in Eritrea in 2008 it failed to conduct human rights due diligence activity and had only limited human rights safeguards in place, HRW said in a 2013 report.
Sudan Tribune
By Tesfa-Alem Tekle

The report released on Tuesday said Nevsun Resources Ltd has failed to stop Eritrean citizens conscripted into government service being used as forced labour at a gold-mining operations known as the Bisha project.

The report said a growing list of international mining firms are "rushing to invest" in Eritrea's booming minerals sector risk involvement in serious abuses unless they take strong preventive measures.

"If mining companies are going to work in Eritrea, they need to make absolutely sure that their operations don't rely on forced labor," said Chris Albin-Lackey, business and human rights senior researcher at Human Rights Watch. "If they can't prevent this, they shouldn't move forward at all."

The small Canadian firm which began the project in 2008 operates in a joint venture with Eritrea's state-owned mining firm, the Eritrea National Mining Corporation (ENAMCO).

The group added that the use of conscript or forced labor in Eritrea is a longstanding human rights concern in the reclusive Horn of Africa nation.

Eritrea's mandatory military service conscripts all citizens aged between 18 and 40 years (both men and women), into military duties for a period of 18 months.

"National service conscripts are often subjected to torture and other abusive forms of discipline. Many are forced to endure unhealthy living conditions and paltry remuneration that equates to just a few U.S. dollars per month. Conscripts who attempt to escape their service face imprisonment, torture, and other forms of human rights abuse. Their family members also face harassment and reprisal" the report said.

Most national service conscripts are assigned to the military, however in many cases, according to human rights watch, many young Eritrean citizens are forced to work indefinitely at state-owned construction sites under harsh and abusive conditions.

The rights group said most of the workers during the construction of the Bisha project came from the country's national service program.

Two workers from the Bisha mine told the rights group that they were forced to work, while another one alleged that he was imprisoned for four months after he left without permission to attend a grandparent's funeral.

"Conscripts who attempt to escape their service face imprisonment, torture and other forms of human-rights abuse. Their family members also face harassment and reprisal," the report said.

Other foreign firms declined to respond to requests by HRW to comment on the issue.

Human Rights Watch called on foreign mining companies to reject working with local contractors which are involved in the use of forced labour and further urged the companies to insist on the right to investigate all allegations of abuse connected to their operations.

Ethiopia and other regional bodies such as the IGAD - the Inter- Governmental Authority on Development - have accused Eritrea of being a destabilising factor in the region.

In a report, the UN Security Council monitoring group said Eritrea was behind a foiled attempt to bomb an African Union leaders' summit in Ethiopia in 2011.

Previous Story
Tagged:
Copyright © 2013 Sudan Tribune. All rights reserved. Distributed by AllAfrica Global Media (allAfrica.com). To contact the copyright holder directly for corrections — or for permission to republish or make other authorized use of this material, click here.