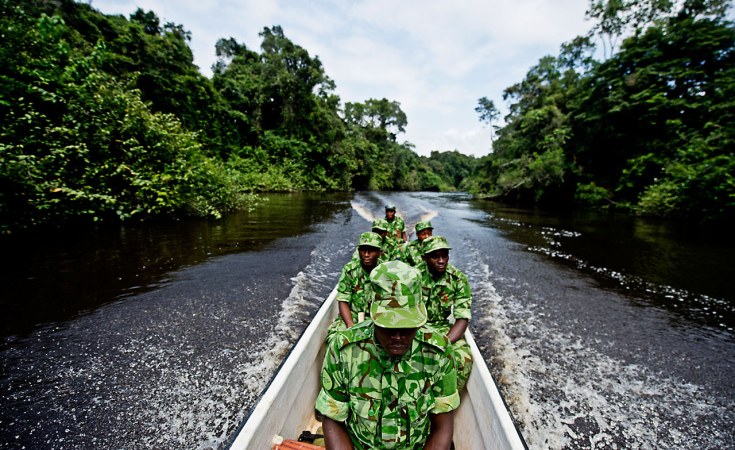 Conservationists warn that unless action is taken soon, Africa's iconic herds of elephants could disappear from the landscape.

"If we do not turn the situation around quickly, the future of the elephant in Africa is doomed," said Professor Lee White, who heads Gabon's national parks, in an interview with the BBC.

It's a chilling premonition ahead of the 3-14 March meeting of the Convention on International Trade in Endangered Species (Cites), which controls the world's ivory trade.

Across Africa, elephants are being pushed to the edge of extinction. In Gabon alone, between 44 and 77 percent of the elephants have been killed since 2004, according to research carried out by Gabon's national parks service.

And while the wild populations are falling, Africa's orphanages are filling up.

On a recent visit to the David Sheldrick Wildlife Trust on the outskirts of Nairobi, I watched as a herd of tiny calves emerged from the forest, crowding around their keeper. They jostled between each other to get close to him, delicately caressing his bare arms with their trunks. It was such a gentle, tender act that it was hard to believe that just a few weeks ago many of the traumatised calves saw their entire families butchered in front of them.

But these elephants at the Trust's elephant and rhino orphanage are the lucky ones. Across Africa, thousands of other calves were not so fortunate, killed alongside their mothers or left to starve in a lonely jungle clearing by poachers hoping to cash in on Asia's insatiable demand for ivory.

In 2012, as many as 35,000 to 50,000 elephants were killed across Africa, according to the International Fund for Animal Welfare (IFAW), with poachers going to extreme lengths to earn just a fraction of the U.S.$20,000 each tusk can fetch on the streets of Asia.

Nowhere is this more true than in Central Africa, where organised gangs have started using rocket-propelled grenades to hunt the region's critically endangered forest elephants.

In Cameroon, the situation got so bad last year that the government sent the army into one of its national parks after militants killed an estimated 650 of the reserve's 1,000-strong herd.

"Poachers were indiscriminate, targeting elephants of all ages and sexes," says IFAW's Céline Sissler-Bienvenu, who saw the aftermath of the attack.

She described how heavily armed gangs severed the trunks of wounded elephants and ripped out their tusks while the animals were still alive.

"In some cases, the state of decomposition suggested that poachers waited until surviving elephants came back to 'mourn' their dead before shooting them as well," she says.

But the problem hasn't been confined to Central Africa alone. Kenya, for instance, saw a 50-percent increase in poaching last year - not to mention the death of six rangers - according to the Kenya Wildlife Service. And right across Africa, the number of elephants being killed, and the amount of ivory being seized, has risen drastically over the past decade or so, conservationists say.

Dame Daphne Sheldrick, the 78-year-old conservationist who runs the Nairobi orphanage, blames Cites for the boom in demand for ivory.

Despite officially banning the trade in 1989, Cites allowed two "one-off" auctions of stockpiled ivory in 1999 and 2008/9, which conservationists consider to have fuelled demand for ivory and provided poachers with a guise under which to launder illegal tusks.

The Environmental Investigation Agency (EIA), which carries out undercover research on the trade, has found that as much as 90 percent of the ivory sold by China's government-approved ivory dealers comes from recently-poached elephants, rather than from the 2008/9 auctions. "The auctions provided dealers with a smokescreen to launder illegal stocks," explains the EIA's executive director, Mary Rice.

The EIA fears for the long-term survival of the species, and says that not enough is being done to clamp down on the poachers. In a recent trial in Kenya, for instance, four Chinese men caught in possession of $23,000 worth of ivory were fined a paltry $340 each.

But the problem of policing isn't limited to Africa.

To date, there has never been a single criminal kingpin or high-ranking government official arrested in connection with the ivory trade anywhere in the world, conservationists say.

Many within conservation circles blame this on the seizures-based reward system operated by Traffic - the body that monitors the illegal trade in wildlife on behalf of Cites. They argue that the system encourages countries to confiscate smuggled ivory at the first opportunity rather than tracking it up the demand chain to tackle the gangs behind the trade.

"There needs to be a total overhaul of the system," warns Dame Sheldrick, who is currently looking after 25 milk-dependent calves at her Nairobi orphanage.

She said the only time poaching was under control was when all sales were banned, and tasked Cites with thinking about elephants rather than trade.

"They've got to ban the sale of all ivory - legal or illegal - forever," she says. "Everyone can live without a trinket. But we should never have to live without elephants."

Like a lot of conservationists, she's alarmed by the prospect of further "one-off" sales. The Tanzanian and Zambian governments tried to sell their stockpiles in 2010, and Tanzania planned to try again at March's meeting, before withdrawing its application under pressure. Dame Sheldrick fears that it is only a matter of time before one is voted through.

"The West doesn't want to jeopardise its trade with China and the Far East," she says. "So they won't vote against them in Cites."

However, there are signs that some in the West may be changing tact. A recent report by the British parliament has recommended that the UK call for an "unequivocal ban" on ivory.

But while Britain and others may have started to question the perceived wisdom of the "one-off" sales, there are no signs that Traffic is likely to recommend an all-out ban any time soon.

"A ban on ivory sales would not address the issue of what to do with the considerable stockpiles of ivory that accumulate each year through natural mortality," argues its spokesman, Richard Thomas. This is a seemingly bizarre argument, given that both Kenya and Gabon have publicly burned their entire stockpiles in the past.

They say elephants never forget; unfortunately for them, the same can't be said of humans.