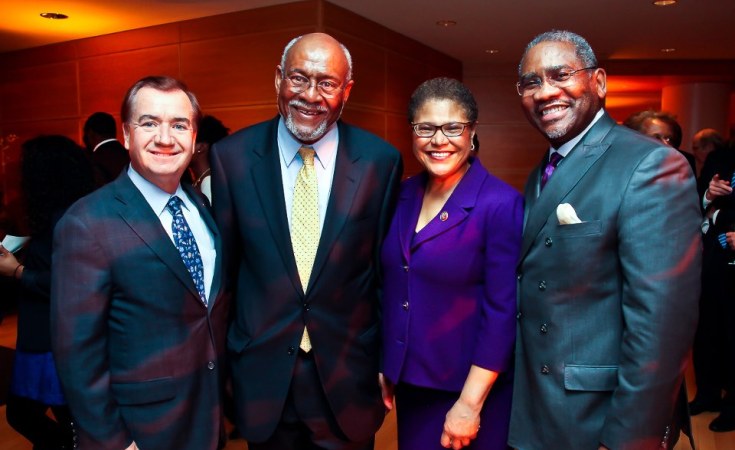 Washington, DC — At a reception honoring outgoing Assistant Secretary of State Johnnie Carson, members of Congress from both parties and leading Africanists paid tribute to the veteran diplomat's long service and his record over the past four years as the Obama's administration's chief Africa policymaker.

Republican Ed Royce from California, who chairs the House Foreign Affairs Committee, said Carson "represents the very best in our foreign service" and cited his 22 appearances testifying before Congressional committees as "some kind of record" that few others would dare emulate.

Congresswoman Karen Bass from California, the ranking Democratic on the House Africa subcommittee, who hosted the event, which was organized by the Africa Society and DESHO Productions, hailed Carson's longstanding commitment to Africa and said it is time to "create a movement" to forge a new U.S. relationship with Africa.

Carson also received accolades from Republican Senator Johnny Isakson from Georgia - who called Africa "the continent for the 21st Century" - and Democratic House members Charles Rangel and Gregory Meeks from New York and Keith Ellison from Minnesota. He was also saluted by Grant Harris, who handles Africa at the National Security Council, Benin Ambassador Cyrille Oguin, speaking on behalf of the African Diplomatic Corps, Melvin Foote and Stanley Straughter from the Constituency for Africa, and Walker Williams from Leadership Africa USA.

Williams credited Carson with shepherding an improvement of U.S. relations with Africa at "a difficult and complex time for Africa and the world." He called Carson "a transformational leader" who, he said, "is ahead of the curve in promoting a robust development strategy and policy for Africa."

"Ambassador Carson exemplifies what it is to be a leader - to think outside of the box, to stay the course and get it right," Williams said.

Photos from the Reception

Tagged:
Copyright © 2013 allAfrica.com. All rights reserved. Distributed by AllAfrica Global Media (allAfrica.com). To contact the copyright holder directly for corrections — or for permission to republish or make other authorized use of this material, click here.