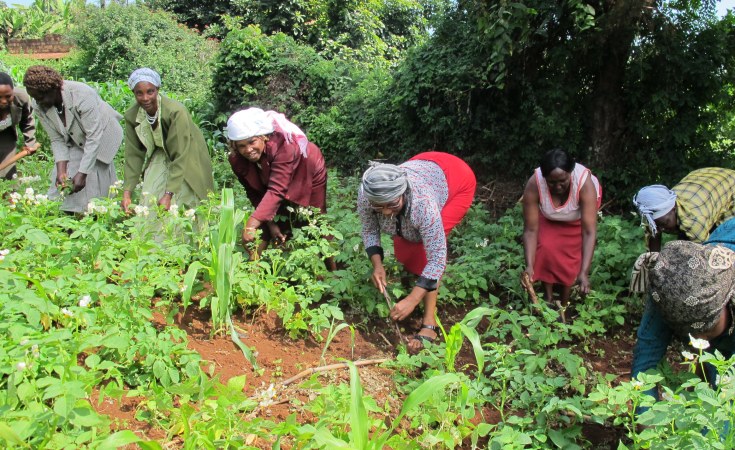 MOLO, Kenya — Fear of violence surrounding the upcoming general elections next week has raised anxiety among many Kenyans, but less so for Nyokabi Wamuyu. She is counting on a new initiative in communal agriculture to help unite communities that might otherwise be divided.

At the same time, this initiative could save the lives of some of the 700,000 Kenyans who would otherwise die over the next two decades from lack of adequate nutrition.

The late 2007 and early 2008 violence following Kenya's last national elections was the worst the mother of four from Kenya's Rift Valley region had seen in the 43 years she has lived in Molo, a farming village on the fringes of the forest in west-central Kenya.

"Some people say they are fighting for land while others do it to take political sides," Wamuyu says. "It is very difficult for us women and children. My family was spared because my husband comes from the dominant tribe in Rift Valley. Others were not that lucky."

The unrest claimed some 1,500 lives nationwide, while thousands more were displaced from their homes.

Communal agriculture used to help hold communities together. Wamuyu recalls that when she was growing up her parents would often help their neighbors with farming, and vice versa. "And so we lived in peace," she said.

But climate change that made crop outcomes unpredictable, and subsequent economic pressures, drove more and more people to urban areas to find work, and the village bonds weakened.

"This is when hostilities between ethnic communities who were previously living together in harmony started showing up," said Molo District Commissioner Julius Kavita. "Rising poverty also escalated the struggle for scarce resources in rural areas."

Now some Kenyans, especially women, are seeking traditional solutions to help their communities thrive and live in peace. The international organization Grassroots Organizations Operating Together in Sisterhood (Groots) last August initiated a project that aims to build peace networks by engaging rural women - those who traditionally nurture communal bonds - in income-generating agriculture.

When households engage in shared activities they learn to live together and this creates an opportunity to solve any differences that may emerge, Groots officials say.

"Communities used to live together in traditional African societies by having regular communal events," says Cyrus Kahiga, a district development officer in Rift Valley. "I am certain such tested benchmarks will work through this project, because it also gives women [the chance] to take charge of society's resources."

Esther Mwaura, Groots Kenya national coordinator, said the project targets 3,400 women farmers in the Rift Valley and eastern regions of Kenya for the next three years with the support of an initial grant of U.S.$3 million from Japan, through the World Bank. The aim is to equip the women with skills to make income-generating farming more attractive than subsistence agriculture.

"We are training women on how to bond through shared activities," Mwaura said. "For this project they are learning how to negotiate for prices and using mobile phones to access agriculture markets."

Over a third of Kenya's children - 2.1 million - are stunted, a condition that occurs when children lack necessary nutrients in the womb and through their first 1,000 days. They are more likely to die as infants, and, if they survive, to have irreversible cognitive and physical damage, including reduced resistance to infection and diminished intellectual potential.

Transform Nutrition is an international coalition to push the issue of nutrition higher on the global agenda through research, evidence and policy discussions. The group says that after improvements in Kenya's infant mortality rate between 2003 and 2009, the rate has been rising again in recent years, as has the prevalence of stunting. Almost half of children between 18 and 23 months of age are stunted.

The estimated cost of stunting to Kenya's economy in 2010 was over US$1 billion. But more nutritious food - especially for breast-feeding mothers and their young children - can save both money and lives. Civil peace would be an additional benefit.

Alice Chekemboi, a neighbor of Nyokabi Wamuyu's, is one of the farmers who have tried their hand at horticulture since Groots Kenya reached out to them. On her farm - a little over an acre - she has been growing cabbage and kale and other vegetables, as well as tomatoes. She hopes to diversify into poultry farming through the Groots Accelerating Rural Women's Access to Agricultural Markets and Trade project.

Sometimes when she needs new skills, she said, she often stops at neighbor Wamuyu's home for a few tips, and, of course, the occasional village gossip.

"Our shared interest in horticulture allows us to visit each other and sometimes work together on the farm," said Chekemboi. "My husband has no problem with me being in charge of the farm since the vegetables I have been growing bring revenue into the family."

Kenya Agricultural Research Institute (KARI) officials say at least 85 percent of projects led by women usually succeed, and if they had greater leadership in agriculture some of the conflicts that have scarred the country would have been averted.

"This is why they are regarded as the family anchor in most African societies."

Agriculture contributes about 26 percent of Kenya's GDP directly and 60 percent of export earnings, and also employs nearly 75 percent of the population, according to KARI.

However, gender inequality is prevalent among the rural poor, and most women are denied the right to own land.

"This could undermine efforts such as the Groots Kenya initiative," says Mary Kamau, the Rift Valley director of agriculture extension. "

The new Kenyan Constitution, however, gives women equal rights to land and property. Transform Nutrition points out that the Constitution also "recognises the right quality and quantity of food as a basic right for children" - one of several recent developments it calls "encouraging", including the development of a National Nutrition Action Plan.

As Kenyans prepare to vote on Monday, with a mixture of fear and hope, the women of Molo know the stakes are high. They hope their efforts, combined with those of many others, will contribute to both peace and prosperity for their communities and their families.

AllAfrica and the Institute of Development Studies in the UK are collaborating on a research-driven reporting series that looks at how evidence-based innovations can save lives, transform communities and promote equitable economic development in Africa. AllAfrica's development reporting is supported by a major grant from the Bill and Melinda Gates Foundation and funding from the Rockefeller Foundation and the Carnegie Corporation of New York.

Tagged:
Copyright © 2013 allAfrica.com. All rights reserved. Distributed by AllAfrica Global Media (allAfrica.com). To contact the copyright holder directly for corrections — or for permission to republish or make other authorized use of this material, click here.