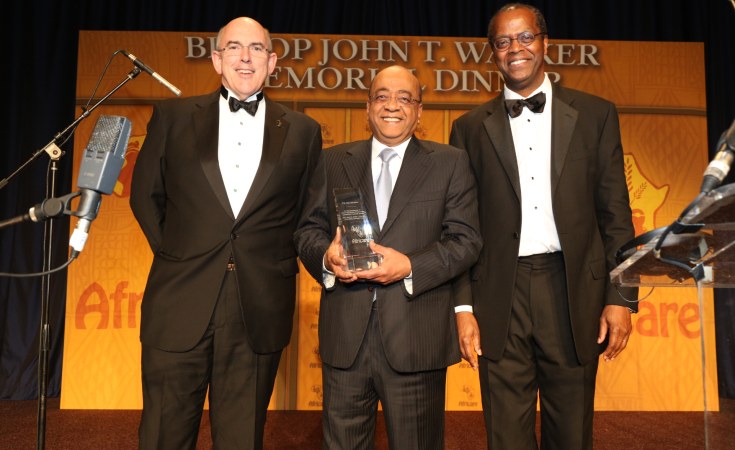 Washington, DC — Although Africa is moving forward, the United States is pulling back, says Mo Ibrahim, the billionaire entrepreneur and father of Africa's mobile phone revolution.

"We are witnessing a gradual and continuous U.S. retreat from Africa," said Ibrahim, speaking at the Washington Hilton Hotel ballroom on Saturday at an event hosted by Africare. "We don't understand that. The U.S. has been a great friend all these years, but as soon as Africa found itself starting to move up, the U.S. is really disengaging, to be frank, and as friends we must be frank with each other."

Listed by Time magazine as one of the 100 most influential people in the world, Sudanese-born Ibrahim is founder of the renowned Ibrahim Prize, which awards U.S.$5 million to democratically elected African presidents who have developed their countries, lifted people out of poverty and leave peacefully after their mandated term of office.

Africare, one of 10 charities receiving donations in 2010 from President Barack Obama's $1.4 million Nobel Prize money, bestowed its Humanitarian Award on the president. He addressed the dinner by video, highlighting his administration's Africa policy, which focuses on economic growth through trade and investment.

Yet the disconnect was obvious when Ibrahim addressed the black-tie dinner guests.

"There is no question that Africa is moving forward. There has been tremendous economic growth in the past decade. Also health, education, and women's rights are improving," Ibrahim said. "This doesn't mean we are there yet. But African civil society is changing the game."

He noted that half of all Africans on the continent are under 19 years of age, and they are better educated, informed and connected. "That is changing Africa," he said. "They don't respect the status quo."

He said Africans feel "a bit uneasy" when it comes to the United States. "The U.S. administration and U.S. businesses are disengaging in Africa. Everywhere in Africa you see Indian, Chinese, Brazilian businesses," he said. "Other than Coca Cola and the oil companies, it is very rare to see American businesses."

Since Obama's late father was from Kenya, hope was high in U.S.-Africa policy circles when Obama first outlined his priorities toward the continent. Despite the rhetoric, there have not been big policy initiatives such as former president George W. Bush's PEPFAR (President's Emergency Plan for Aids Relief) initiative, which is credited with saving millions of lives in the developing world.

Ibrahim said African politics and economic mismanagement were holding the continent back. "Regional economic integration is most important. We can't be 54 disconnected little countries, going nowhere - we can't compete in this world like that," he said. "Africa is a very rich continent. There is no reason to have poor and hungry people."

Regarding corruption, he said Africans must demand good governance in the private sector. "For each corrupt official, there are at least a dozen corrupt business people," he said.

Ibrahim said the illicit transfer of funds in Africa is about five percent bribes, and 95 percent corporations avoiding taxes, mispricing and committing other infractions.

Ibrahim was disappointed that President Obama did not attend Tuesday's event.

"For this disengagement to happen on the watch of our son (Obama) in the White House is strange for us," he said. "This is not about aid money. We know it is hard times here with Congress and other issues. We really love you. We want a little bit of love, Mr. Obama, come and give us a hug now and then."

To listen to an interview with Mo Ibrahim on NPR, click here.