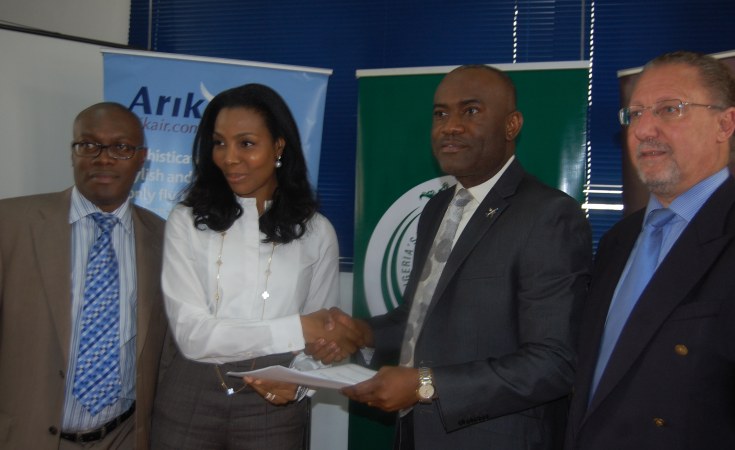 Arik Air, Nigeria and West Africa's largest airline is to play a key role in Nigeria's Centenary Celebrations as an Associate Sponsor of the Centenary Pageant. The world class pageant is aimed at promoting the objectives of the 2014 Centenary celebrations marking the amalgamation of southern and northern Nigeria by Lord Lugard in 1914.

An agreement to this effect was signed on Monday between Arik Air and AOE Events and Entertainment Limited, the company commissioned by The Federal Government of Nigeria to put together the Centenary Pageant.

Former Miss Nigeria, Chief Nike Oshinowo who is the Chief Executive/Creative Director AOE Events and
Entertainment Limited disclosed at the signing ceremony that Arik Air will participate in all aspects of Nigeria's Centenary Pageant as the Associate sponsor.

It is expected that the Nigeria Centenary Pageant Queen will serve as Arik Air's Brand Ambassador for no less than five years while the airline will be involved in the nationwide castings, reality TV shows as well as post event mentions during the Queen's reign. The Centenary Pageant will be in three phases: casting and selection of contestants, camp and reality show, and the grand finale.

Arik Air Managing Director/Executive Vice President, Mr. Chris Ndulue elaborated on the Centenary Pageant sponsorship:
"Arik Air is honoured to be invited to play a key role in Nigeria's Centenary celebrations. This partnership further underscores our commitment to the people of Nigeria to deliver new standards in aviation and promote that which is truly Nigerian."