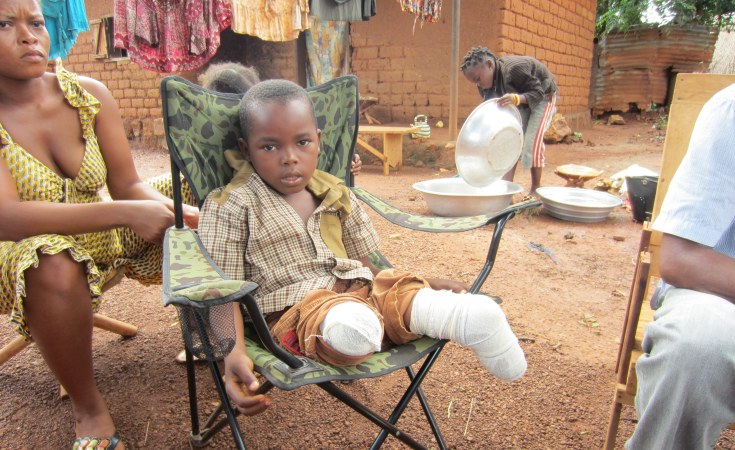 Godfrey Byaruhanga/Amnesty International
Jovachi Mongonou, 9, had both legs amputated after he suffered severe shrapnel wounds when Seleka soldiers shelled a church in Bangui in April 2013.
allAfrica.com

Cape Town — The rebel fighters who overthrew the government of the Central African Republic (CAR) earlier this year, and who now comprise the country's armed forces, are "out of control", says the international advocacy group, Amnesty International.

In a report released on Tuesday, Amnesty says senior military and government officials in the CAR told its researchers they want the United Nations to deploy a peacekeeping mission with a mandate to use force to bring the country under control before it becomes "totally ungovernable".

The report – which details a litany of human rights abuses since Seleka rebels first launched an offensive against, and then overthrew former President Francois Bozizé – says researchers were told that government ministers who are not leaders of Seleka factions are "powerless" to prevent violations.

Even the orders of President Michel Djotodia are often disobeyed if they are issued to rebels who are not part of his faction. Moreover, his faction is among those reported to have committed violations, the report says.

In a press release issued with the report, Godfrey Byaruhanga, an Amnesty researcher, said that "Seleka forces have attacked civilians across the country, executing and torturing civilians, indiscriminately shelling communities, raping women and forcefully conscripting children".

He added: "The level of hopelessness and despair has reached a new high as a result of these persistent, large scale human rights violations, which may amount to war crimes and crimes against humanity."

The report cites evidence suggesting that Seleka forces have grown from 5,000 fighters when they overthrew Bozizé in March to 20,000 two months later. Among the fighters are an estimated 3,500 child soldiers, and elements from Chad and Sudan.

Amnesty quotes a CAR government official as saying the government has "neither the capacity to control nor the means to equip, clothe, feed and pay such a large number of fighters – many of whom are foreigners and are not under the direct command and control of the government or its nominal senior commanders".

The report says that Chadian elements of Seleka forces have committed "a vast number" of rights violations and that Chadian members of an African Union peacekeeping force have been implicated in violations.

Byaruhanga described international efforts to cope with the crisis in the CAR as "piecemeal and ineffective." Although the African Union announced in July that it would send 3,500 troops to protect civilians, this was "grossly inadequate" and so far less than half that number have been deployed.

Amnesty said it was told: