Zimbabwe: Mujuru vs. Mnangagwa - the Battle to Succeed Mugabe Steps Up in Zimbabwe 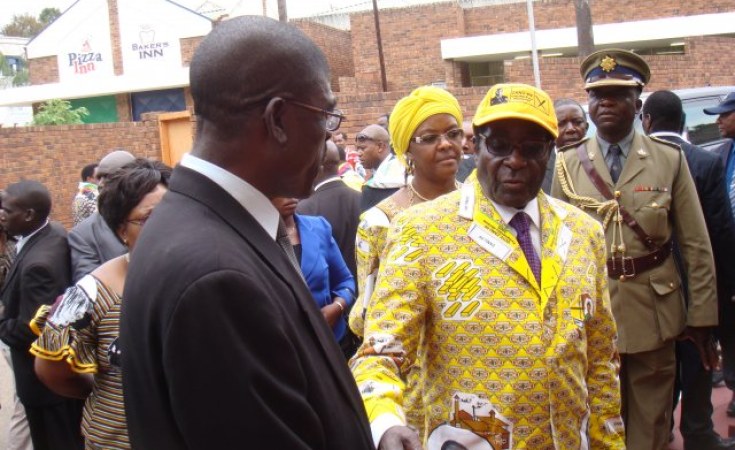 This year could see Mugabe's successor emerge once and for all, but who will it be? Mujuru has the numbers, but Mnangagwa has the powerful backers.

Barely half a year after Zimbabweans voted to keep ZANU-PF in power and maintain Robert Mugabe as president, another crucial election battle is raging, albeit this time behind the scenes and within the inner workings of the ruling party.

At almost 90 years old, few expect Mugabe to continue for too much longer and the struggle to be his replacement is in full swing. Furthermore, this competition is only likely to intensify as the party's annual congress, which is to be held in December and at which the president's successor will likely emerge, fast approaches.

After 33 years of Mugabe at the helm, the prospect of a new president is becoming all the more real, and the usually concealed power struggles within ZANU-PF are increasingly being played out in the national spotlight. Everyone seems to agree that the two main contenders are Vice-President Joice Mujuru and Justice Minister Emmerson Mnangagwa, and both appear to be ramping up their campaigns to take over the top job. But who or what will decide which candidate succeeds, and which hopeful has the upper hand?

At the core of the long running struggle for supremacy in ZANU-PF are two factional groups led by Mujuru and Mnangagwa. Mujuru's side, sometimes referred to as 'the moderates', is a purportedly pro-business and centrist bloc that is seen as attempting to push ZANU-PF politics to the centre and improve relations with the international community.

Mnangagwa's camp, the so-called 'hard-liners' or 'old guard', is mostly made up of an elite group believed to have dominated Zimbabwe's political scene since the 1980s; many assume that this faction would seek to continue Mugabe-style politics, anti-western rhetoric and policies as well as continued authoritarianism.

This is possibly why Mujuru's group fared much better than Mnangagwa's in the party's provincial elections at the end of 2013, with figures loyal to Mujuru winning control of nine out of Zimbabwe's ten provinces, though it should be noted that the vote was marred by allegations of voter intimidation and fraud.

Nevertheless, Mujuru's victory has injected much optimism within her camp, based on the fact that provincial chairpersons and their executives play a central role in electing the party's national chairperson, two vice-presidents, and future presidential nominee. Indeed, Mujuru's electoral victory in all but one of Zimbabwe's provinces has understandably marked her out as the clear frontrunner for many observers. However, to think the struggle to succeed Mugabe is now effectively over would be to grossly misjudge ZANU-PF politics and Mnangagwa's cunning and ambition.

Firstly, to think Mujuru has the future presidency sown up assumes provincial leadership allegiances are static and could not change before the party congress in December. In reality, there is likely to be plenty of movement with party stalwarts switching faction, and on this front, Mujuru's group is the more vulnerable. The vice-president's camp is essentially an assortment of groups within ZANU-PF including grassroots activists, young politicians clamouring for a new kind of politics, self-described moderates, and some of the more pragmatic old guard led by Defence Minister Sydney Sekeramayi who do not agree with the hard-line politics of Mnangagwa. Indeed, the loose force that seems to be holding these disparate groups together is not a shared vision for the future necessarily but rather a dislike for what they regard as Mnangagwa's ruthless politics and cold persona.

Mujuru is faced with the challenge of keeping all these more or less autonomous and unpredictable groups on side until December 2014 in the face of inevitable attempts from Mnangagwa's group to pressure or persuade those less committed loyalists to defect.

Secondly, confidence in Mujuru's position assumes Mnangagwa's group has thrown in the towel and accepted that it will play second fiddle in ZANU-PF politics. This seems highly unlikely. The rivalry between Mujuru and Mnangagwa has been simmering for a long time and the justice minister has proven in the past that he is not beyond using subversive means to get what he wants.

Finally, any assurance in Mujuru's rise accepts at face value the suggestion that the presidential succession will in fact be predicated on electoral success within the party. In reality, however, gaining the endorsement of the securocrats and the blessing of Mugabe could be just as important as any election.

Looked at from this perspective, the fact that Mnangagwa's faction does not seem overly rattled by the results in the provincial elections makes more sense.

Zimbabwe's military have long played a pivotal part in ZANU-PF politics, and many believe Mugabe would not have had the same staying power without the security elite's endorsement. These securocrats might not have a vote, but it seems that they do have a preferred candidate.

Over the years, Mnangagwa has cultivated a much stronger relationship with the intelligence community and military than Mujuru, partly through his previous role of defence minister. Furthermore, the belief that Mnangagwa would be more likely to seek continuity as president rather than change also plays well to the securocrats looking to maintain their privileged positions of power.

Gaining Mugabe's endorsement will also be crucial. After all, the long-time president still dominates the party, and through ZANU-PF history Mugabe's hand has been central in ensuring the rise or fall of various politicians.

Looking to his successor, Mugabe's will presumably want a leader that can keep the party together, but crucially also one who will allow him to continue playing a part in politics from behind the scenes. The person who seems to fit this bill closest is the figure who has long been considered Mugabe's blue-eyed boy, Mnangagwa, and there have been signs that he is indeed Mugabe's preferred candidate.

For example, when Mugabe held a press conference on the eve of the July 2013 election, he was flanked by the press secretary on one side and Mnangagwa on the other. Asked if Mnangagwa's presence meant he was next in line to the throne, Mugabe seemed to be caught off guard and hastily claimed the then defence minister had just dropped by for a visit. In more concrete terms, however, it is notable that Mugabe has always assigned important government ministries to Mnangagwa - including state security, home affairs, defence and justice - and that Mnangagwa is believed to be one of just a few ZANU-PF officials allowed to maintain direct and close ties to Zimbabwe's security community, a privilege not understood to be granted to Mujuru.

It is possible Mugabe considers Mujuru more of a lightweight than the hard-line Mnangagwa and may believe she will struggle to deal with the opposition, foreign interests, and the party's internal tensions. He may also be concerned that ZANU-PF's image of being a fearless revolutionary party will be lost under Mujuru.

In fact, Mugabe's ties to Mujuru have always been somewhat opportunistic, with the president arguably maintaining close links with her to appease Solomon Mujuru, Joice's powerful late husband.

Nevertheless, Mugabe has yet to explicitly name his preferred successor, and over the coming year, a political civil war is likely to wage between the two hopefuls. In this fight, Mujuru may have won the provincial election battle, but Mnangagwa arguably has behind him the country's most canny strategists with the experience and vision to devise an overall victory. The most notable of these are Jonathan Moyo and Patrick Chinamasa, a formidable duo that helped deliver various electoral victories for Mugabe, though Mnangagwa also has the support of other senior ZANU-PF figures who could prove useful.

By contrast, Mujuru's faction looks weaker. The most conspicuous politician in her faction is probably Didymus Mutasa, a politburo member who many believe constitutes little threat, while the same could be said of ZANU-PF spokesperson Rugare Gumbo, another figure believed to be loyal to Mujuru.

How things will pan out over 2014 and which candidate finally achieves their long-held ambition of becoming the next presidential nominee remains to be seen. All eyes are on the party congress in December.

However, in many ways, whatever happens at that conference will not be the end of the story, but just the latest chapter in the Mujuru-Mnangagwa rivalry. Indeed, it is highly improbable that a single person will dominate the party as Mugabe has, and whichever faction wins will have to ensure the other faction does not feel like it lost too badly.

After all, if Mujuru takes over ZANU-PF, she will not only have to appease Mnangagwa's ambitious allies for the sake of unity, but also probably concede considerable power in order to secure the electoral experience of his faction with the 2018 general elections in sight.

On the other hand, if Mnangagwa emerges victorious, he too will have to be generous to Mujuru's faction in order to retain the support of the party's lower ranks, the vice-president's power base, in the same interests of cohesion and electoral success.

Thus, whichever group triumphs, it is unlikely to drive the other into obscurity. It is more likely that the two leaders will share power to a large degree, at least in the short-term, resulting in a dual power regime within the party, with the leadership role itself being largely nominal. It seems the political tale of Mujuru vs. Mnangagwa is destined to drag on for quite some time yet.

Simukai Tinhu is a political and economic analyst with an academic background in African politics (University of Cambridge). He is the Editor of Maximum Africa Journal, a weekly African affairs magazine. Follow him on twitter @STinhu 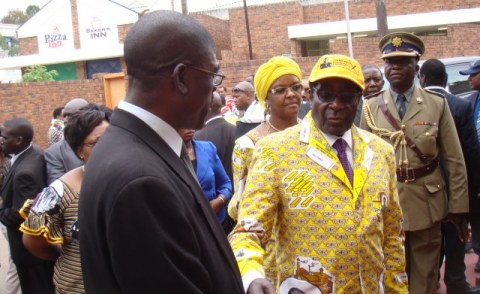 Battle to Succeed Mugabe Heats Up in Zimbabwe
Tagged:
Copyright © 2014 ThinkAfricaPress. All rights reserved. Distributed by AllAfrica Global Media (allAfrica.com). To contact the copyright holder directly for corrections — or for permission to republish or make other authorized use of this material, click here.