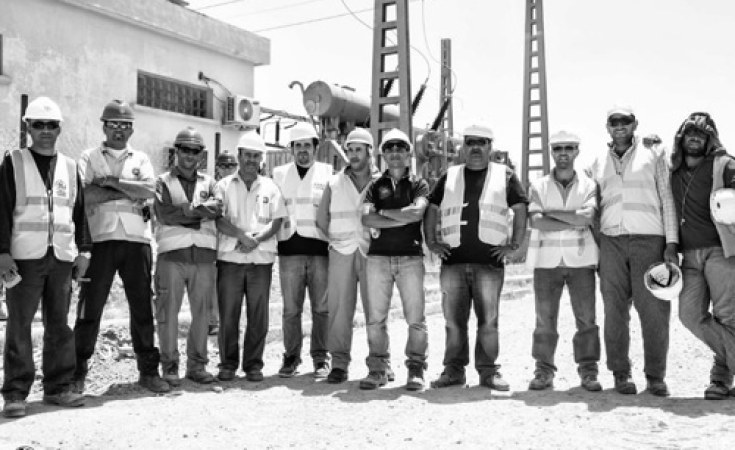 The GE team at an installation in Algeria.
Content from our Premium Partner
GE Africa (Lagos)
press release

The Tatooine-like landscape of the M'Sila province in northern Algeria provides the country's Mediterranean coast with a rugged bulwark against the encroaching Sahara desert. Despite the arid conditions (M'Sila is quite close to the original Star Wars set), the province is home to 1 million people who need electricity, especially in the summer when temperatures easily top 100 degrees Fahrenheit.

Earlier this year, GE started shipping to the area mobile power plants designed to "fast-track" power production and make sure that locals have enough power to turn on their ACs and meet peak electricity demand. Each of the mobile power plants rides on a trailer and holds a modified jet engine that burns natural gas to generate power. The engines are manufactured by GE workers in Cincinnati, Ohio, and the power plants are assembled for shipping by a GE team in Houston, Texas.

The technology, which GE calls aeroderivatives, serves on all continents, with the exception of Antarctica. GE usually sends the plants to their destination by ship, but they can also fit inside huge AN-124 transport planes for immediate delivery. If gas pipelines, concrete support pads and other infrastructure are already in place, workers can get the plants running in just 60 days.

The mobile plants are part of a $2.7 billion power generation technology deal announced last Monday. Taken together, the technology, which includes massive gas turbines for co-generation power plants as well as the aeroderivatives, will supply Algeria with nine gigawatts of electricity.

Tagged:
Copyright © 2013 GE Africa. All rights reserved. Distributed by AllAfrica Global Media (allAfrica.com). To contact the copyright holder directly for corrections — or for permission to republish or make other authorized use of this material, click here.