Congo-Kinshasa: Congo's Crisis in the Shadows - Katanga On a Knife Edge

With the secessionist group Bakata Katanga agitating for independence and Kabila's support in the province waning, Katanga looks precariously balanced.

Insurrection and political instability have long been a feature of the Democratic Republic of Congo's (DRC) southern Katanga province. The region was established as a breakaway state from the former Belgian colony in 1960, and despite its reintegration in 1963 and the defeat of rebellions in 1977, the province has continued to witness recurring separatist movements.

Currently, it is the apparent staying power of the Bakata Katanga secessionist group that is of growing concern to the short-to-medium term security outlook for the province. To date, rebel activity within Katanga has resulted in the internal displacement of approximately 400,000 people, creating a humanitarian crisis that is poised to spiral out of control.

Bakata Katanga advocates for the establishment of an autonomous Katanga state. At the core of the group's rebellion is the asserted unequal wealth distribution from the province's highly profitable mineral exports. Despite the surrender of more than 200 members of the group in Lubumbashi in March 2013, the separatist movement has maintained a significant operational capacity in the province.

In recent months, remnants of Bakata Katanga have significantly increased their activity within the group's primary area of operation - between the Mitwaba, Manono and Pweto territories. Yet in the absence of consolidated leadership, the group's modus operandi remains focused on pillaging local villages and the targeting of artisanal mine locations. These attacks prove more convenient and conducive to their current operations given the group's highly mobile nature and absent political mouthpiece.

Given the province's economic importance, and that the distribution of remunerations from the mining industry remains a key grievance for the group, the growing secessionist threat has raised concern within the commercial mining sector. While Bakata Katanga has not demonstrated the desire, or the operational capacity, to target commercial mining facilities in the region, growing political divisions within the province may serve to foster the group's activities. Although not believed to possess the necessary capabilities to infiltrate mining compounds, the group has the potential to disrupt export operations along transit routes should the overall security environment in Katanga deteriorate.

On a knife edge

Despite President Joseph Kabila's personal ties to Katanga, his political support in the province is waning. With impending elections in 2016, and a historically ingrained secessionist sentiment within the province, political dealings in Katanga will be paramount to the security environment in the country.

At the forefront is the planned decentralisation of power, largely via the proposed division of Katanga into four separate provinces. While dividing the province would facilitate local government on a practical level, such 'governance by substitution' relies heavily on local leaders' commitment to the central authority, and the Kabila administration's capacity to extend beyond Kinshasa, located some 1,500km away, is already being questioned. With internal weaknesses, including limited resources and corruption, maintaining the required ties is likely to become increasingly difficult.

In addition, the move to sub-divide Katanga has the potential to cement existing rifts between the resource-rich south and poorer northern areas. With Bakata Kananga already receiving much of its support from the northern territories, such developments may facilitate the capacity for Bakata Kantanga to consolidate itself as a goal-orientated organisation through political backing.

The Kabila administration has recognised its negligence over Katanga, as has the UN's DRC mission (MONUSCO). And on 29 January, MONUSCO released a statement in which it confirmed its concern over the impending crisis in the province. Now, both the Congolese army (FARDC) and MONUSCO's intervention brigade are likely to emphasise Katanga on their strategic agendas going forwards. However, with conflict still ongoing in North Kivu and sporadic hostilities reported in Orientale province, FARDC and MONUSCO are becoming increasingly strained.

In Katanga province, it may indeed be a case of too little too late. The foundations for sustained insecurity in the province have been laid, and with the Kabila administration and counterparts in Katanga becoming increasingly restless ahead of the elections, Katanga province remains delicately balanced on a knife edge.

Poverty Amid Mining Riches in Katanga 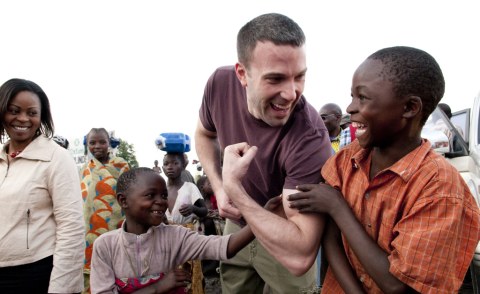 Boost Peace in DR Congo - Affleck
Tagged:
Copyright © 2014 ThinkAfricaPress. All rights reserved. Distributed by AllAfrica Global Media (allAfrica.com). To contact the copyright holder directly for corrections — or for permission to republish or make other authorized use of this material, click here.