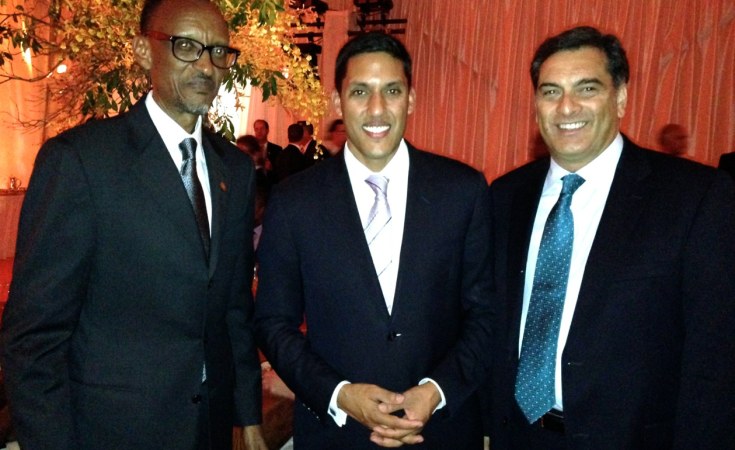 Symbion will build, own and operate a 50 MW power station by constructing gas extraction facilities to lift, separate, and process methane gas, which is dissolved in the deep waters of Lake Kivu, and then deliver it to an on-shore generating facility located at Cape of Busororo in the Nyamyumba area of Rwanda. Lake Kivu contains 300 km3 of dissolved carbon dioxide and 55 to 60 km3 of methane gas accumulated and trapped at significant depth in the lake.

"We're very excited that with President Obama's recent announcement of tripling Power Africa's goals to now add 30,000 megawatts to sub-Saharan Africa, partners such as Symbion Power are exploring new opportunities in countries like Rwanda where they have never worked before," said USAID Administrator Dr. Rajiv Shah. "Through this new model of public-private partnership, we can expand opportunity for millions and drive growth at home and abroad."

Symbion Power is an American company in the electricity generation, transmission and distribution industry with an established presence in Tanzania, Nigeria, South Africa and operations throughout Africa; this is the company's first project in Rwanda. Paul Hinks,
Rwanda Awards Power Project to Symbion Power/page 2

Symbion CEO said, "Rwanda is an amazing investment destination. What President Kagame and his government have achieved over the past 20 years must represent the most incredible example of nation building in recent history. We have worked towards investing in Rwanda for the past three years and we are delighted by this new development. We hope other US companies will follow us."

"Symbion's IPP project will use Lake Kivu's methane resources for a commercial benefit for the people of Rwanda, but it will also reduce the risk of an environmental disaster," said Hinks. "Without the removal of methane and carbon dioxide, there is a risk of a sudden release of large quantities of these gases with a potentially catastrophic result." Rather than just vent the 50-60 km3 of methane, Symbion will use the produced methane for power generation. The methane gas production will be used to power reciprocating gas engine generator sets producing 50MW in a phased approach.

ABOUT SYMBION POWER
Symbion Power is an American company in the electricity generation, transmission and distribution industry with operations throughout Africa. Symbion builds, owns and operates electrical power infrastructure. Our power plants supply electricity to some of the world's most critically underserved regions. Symbion also undertakes Engineering, Procurement, and Construction (EPC) work in the electricity supply sector and has worked on large-scale generation, transmission, and distribution projects in the Middle East, Africa and Asia. With a deep commitment to empowering local communities Symbion brings together the knowledge and operational know-how to succeed in the world's most challenging environments. Symbion Power is based in Washington DC, USA.
For more information : symbion-power.com #PowerAfrica

Tagged:
Copyright © 2014 Symbion Power. All rights reserved. Distributed by AllAfrica Global Media (allAfrica.com). To contact the copyright holder directly for corrections — or for permission to republish or make other authorized use of this material, click here.