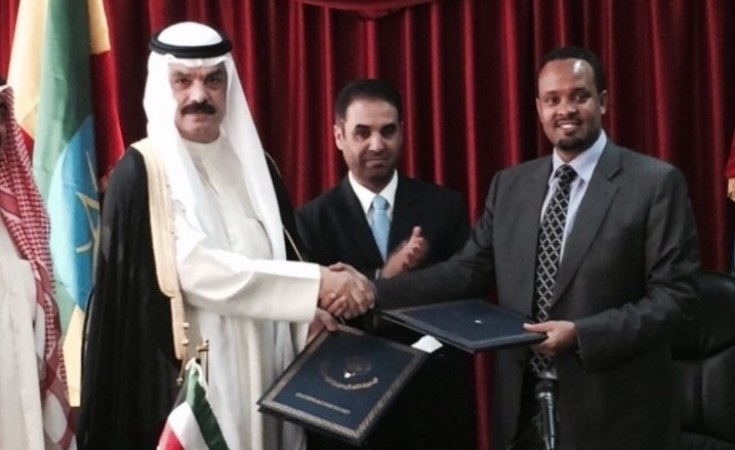 A Loan Agreement between Kuwait Fund for Arab Economic Development and The Federal Democratic Republic of Ethiopia has been signed today in Addis Ababa whereby Kuwait Fund extends a Loan in an amount of K.D 6.5 million equivalent to about US$ 22.1 million to participate in the financing of the Axum Water Supply.

A Project Agreement relating to the said Loan was also signed between the Kuwait Fund and the Axum Water Supply and Sewerage Utility.

The Loan and Project Agreements were signed by H.E. Mr. Ahmad Shidi, Minister of Finance, on behalf of the Federal Democratic Republic of Ethiopia and Mr. Hamad S. Al-Omar, Deputy Director-General of Kuwait Fund for Arab Economic Development, signed both the Loan and the Project Agreements on behalf of Kuwait Fund, in attendance of His Excellency Mr. Rashid Al-Hajri, Ambassador of the State of Kuwait to Ethiopia and Mr. Abdulrahman Al-Hashim, Regional Manager for Central, East and South African Countries.

The Project aims at providing clean and sustainable water supply for the city of Axum and its environs up to the year 2050 through the construction of a water supply and treatment system starting at the Maychew River about 30 km South the city of Axum in the Tigray National Regional State.

The Project consists of the construction of a Stone-Masonry dam on the Maychew River. The dam site will also be the site for the water treatment plant that will be constructed with its required pumping station, generator house and clear water tanks. The Project will also include a rising clear water transportation main that will transport the water to the city of Axum and be supported by 2 pumping stations that include the generator and transformer houses, on this rising main there will be public taps for the neighboring towns. The rising main will connect to three water reservoirs to be constructed, which supply the city water distribution network. Finally the Project will include the construction of a new water distribution network for the city and the consultancy services with the panel of experts.

The Loan matures over a period of 25 years including 5 years grace period, and will be amortized in 40 semi-annual installments, the first of which will be due on 1st date on which any interest or other charge on the Loan shall fall due after the elapse of the above mentioned grace period. The Loan bears an interest rate at 1.5% per annum, in addition to 0.5% per annum to cover administrative costs and other expenses incurred in the implementation of the Loan Agreement.

The signing of this Loan brings to 7 the number of loans extended by Kuwait Fund to The Federal Democratic Republic of Ethiopia or its agencies, where the Fund previously provided 6 loans totaling about 43.3 million Kuwaiti Dinars, equivalent to about US$ 147.22 million to participate in the financing in projects in the transport, water and power sectors of the economy.