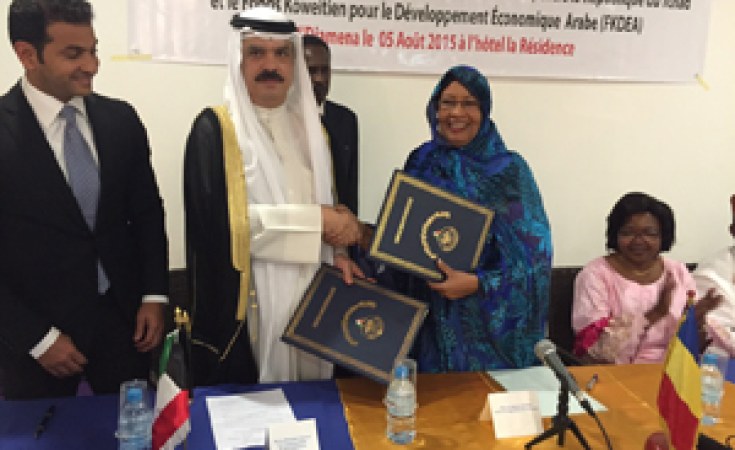 Kuwait Fund
The Loan Agreement was signed on behalf of the Government of the Republic of Chad, by Her Excellency Mariam Mohammed Noor, Minister of Planning and International Cooperation, and Mr. Hamad S. Al-Omar, Deputy Director-General of the Fund.
Content from our Premium Partner
Kuwait Fund For Arab Economic Development (Kuwait City)
press release

A Loan Agreement was signed today in N'Djamena between the Republic of Chad and the Kuwait Fund for Arab Economic Development, whereby the Fund will provide a Loan in the Amount of 4.0 Million Kuwaiti Dinars (equivalent to about US$13.6 Million), to the Republic of Chad, to participate in the financing of the Rice Production Development Project in the Plain of Chari-Logone.

The Project aims to support the economic and social development in the Chari-Logone Plain at Sahr Governorate, by providing required and sustainable water from Chari River to irrigate about 400 ha of agricultural lands. Thus increasing rice production and other crops, improve farmer's income, and support Government food security strategy.

The Project consists mainly of civil and electromechanical works to develop the targeted lands and to construct about 10 water irrigation schemes. The Project also includes agricultural mechanization, inputs, training and extension services, consulting services for the preparation of detail design and the environmental & social study, tender documents and Project supervision, institutional support, in addition to the Project Management.

The Loan shall be for a period of 26 Years, including a grace period of 4 Years, and shall be repaid in 44 semi-annual installments, the first of which will be due on the first date on which interest or other charges will fall due, pursuant to the Loan Agreement, after the expiration of the said grace period. The Loan bears an interest rate of 1.5% per annum, in addition to a rate of 0.5% per annum to meet administrative costs and other expenses incurred in the implementation of the Loan Agreement.