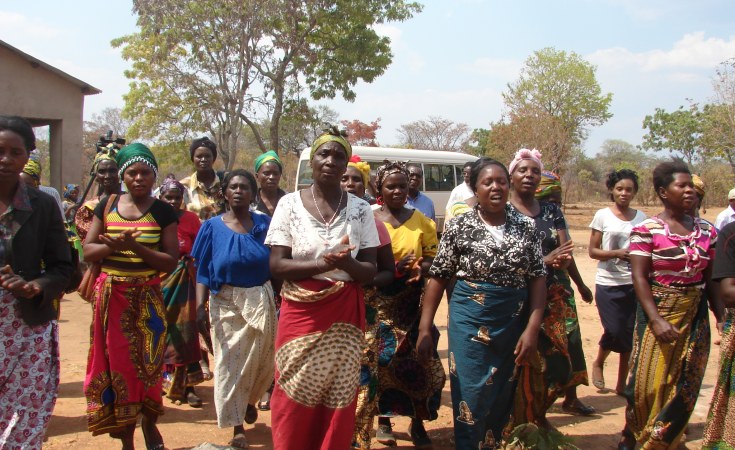 Ten million young people are entering the African labour market every year. This presents both a challenge and an opportunity to take advantage of the "youth dividend" by encouraging them to become entrepreneurs, writes AllAfrica's Melissa Britz from Lusaka.

The 2015 Africa Agriculture Status report, entitled Youth in Agriculture in Sub-Saharan Africa, has been launched at the African Green Revolution Forum in Lusaka.

According to the report there are almost 200 million people aged between 15 and 24 on the continent, of whom 10 million enter the labour market every year. This presents both a challenge and an opportunity to encourage young people to drive growth by engaging in entrepreneurship - by producing food but also in the research, processing, packaging and retail sectors.

Already, African countries spend more than U.S. $60 billion on food imports each year. And the World Bank predicts that by 2030 an increase in incomes in major cities could generate consumer demand for food products in the region of U.S. $1 trillion.

This offers a massive opportunity for African producers. If we are to take full advantage of it, says Agnes Kalibata, the president of The Alliance for a Green Revolution in Africa (AGRA), entrepreneurship is vital.

About 65 percent of Africa's labour force is employed in the agricultural sector but urgent challenges need to be addressed in order to meet consumer demand. These include: a poorly defined land rights tenure system, limited access to finance, insufficient quality farm imputs, limited access to agri-technology, a lack of entrepreneurial training and a lack of infrastructure.

Among recommendations made in the report by contributors:

"It's really time to strengthen the use of ICT in agriculture, all over Africa. So we recommend that countries put together strategies to strengthen ICT use in all the sectors from pre-production, production and marketing," says Ken Lohento, programme coordinator at the Technical Centre for Agricultural and Rural Cooperation, an international non-profit set up under an agreement between the African, Caribbean and Pacific (ACP) group of countries and the European Union.

"This is critical," he adds, "in order to facilitate access for agricultural entrepreneurs especially in rural areas. We need shared spaces where people can access ICTs in rural areas, and we need to reduce the cost of usage, and more infrastructure in rural areas."

Rita Weidinger, executive director of the African Cashew Initiative of the German development agency, GIZ, in Accra, says the private sector needs to be at the front and centre of agricultural growth:

"The private sector accounts for 90 percent of the jobs, and the private sector also includes farmers. There's also the need to be linked to markets... In the last few years there has been a shift in market power, and agriculture value chains provide more potential for more inclusive business models.

"Retailers and buyers, such as supermarkets and hotels, all rely on quality food and they need it in the right quantity and at the right time. This means that farmers have a new opportunity. International food chains and retailers have recognised that. For example in terms of cashews and cocoa the Walmarts of this world have realised that and all run after the farmer now. This enables farmers to better choose their markets."

Lindiwe Sibanda, chief executive officer and head of mission at the Food, Agriculture and Natural Resources Policy Analysis Network, highlights the role of indigenous knowledge and practices in agriculture and says modernisation should be carefully considered.

"We need to address the policy puzzle by making sure we use evidence based on knowledge we used to have when our grandparents used to fertilise the soil. They used to invest in resting part of the land, but making sure that the family is fed first...

"Let's go back to the farm and empower farmers. Make sure they are rewarded for their hard work, make sure agriculture is not just farming. Let's look at the whole value chain and let's modernise for our own good, not for the good of others."

David Ameyaw, head of strategy, monitoring and evaluation at AGRA and executive editor of the report, summarises it:

"Food security and unemployment are two challenges that are facing this continent, and the reason why this report has come at the right time is that Africa has reached what we call the youth bulge, which means that the population between 15 and 24 has reached a peak. While all other continents are aging, Africa is 'youthing'.

"If we have food insecurity and we have unemployment, how do we utilise what we call the youth dividend... that we have on this continent so that we can incentivise, mobilise, empower and organise young people to solve these two challenges.

"With the characteristics of young people - dynamism, creativity, energy and strength - we'll be able to tackle the two biggest challenges this continent is facing."

Melissa Britz's reporting from Lusaka is supported by the The Alliance for a Green Revolution in Africa.

Harvesting the Economic Potential of Africa's Bumper Crop of Youth