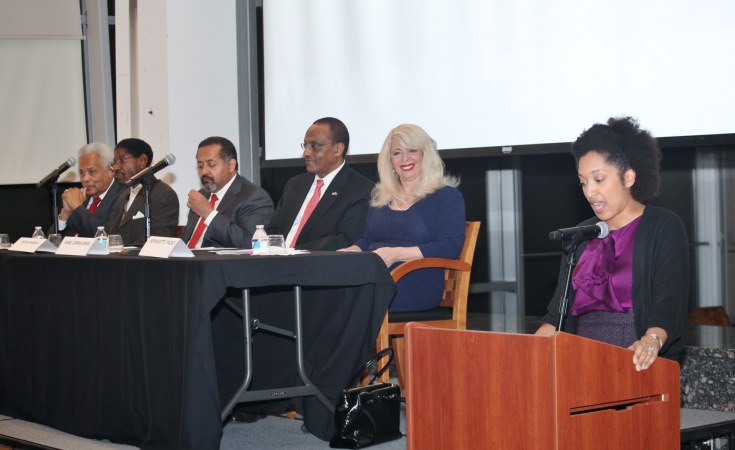 Washington, DC — For the first time in the fifteen history of The Africa Society of the National Summit on Africa, the organization paused to pay tribute to those leaders and partners who have contributed significantly to the Society's growth and success. This program also marked the end of the long tenures of Noah Samara as Board Chair and Bernadette Paolo as President and CEO. Ambassador Pamela E. Bridgewater will now be the CEO and Chair of the Board and Patricia Baine will be the President of The Africa Society beginning January 8.

On Tuesday, December 1, "An Evening of Commemoration and Celebration with The Africa Society" was hosted by His Excellency Girma Birru, Ambassador to the U.S. from Federal Democratic Republic of Ethiopia at the Ethiopian Embassy. The event, attended by Congressmember Karen Bass, prominent leader on Africa issues in the Congress and Ranking Member of the House Subcommittee on Africa, Global Health, Global Human Rights and International Organizations, and over 140 other guests, was convened to honor those individuals who have made significant contributions to the Society and who are outstanding leaders in their fields.

Rani Robinson Kiganda, Director of Digital for the Travel Channel and daughter of the late Leonard H. Robinson, Jr., founder of The Africa Society and President of the National Summit on Africa, delivered special remarks about her father's dedication to the continent of Africa and the contributions he made during the course of his career.

According to Paolo, "We are pleased to pay tribute to every single person honored this evening for your friendship and support. We applaud you for your work on Africa and your great individual achievements."
Newly-selected President and former Director of Programs, Patricia Baine, stated that as she has grown considerably as a result of her interaction with all of the honorees, she looks forward to continuing these partnerships in the future."

A highlight of the program was the premiere of a documentary about The Africa Society by Borderline Pictures.

Tagged:
Copyright © 2016 Africa Society of the National Summit on Africa. All rights reserved. Distributed by AllAfrica Global Media (allAfrica.com). To contact the copyright holder directly for corrections — or for permission to republish or make other authorized use of this material, click here.