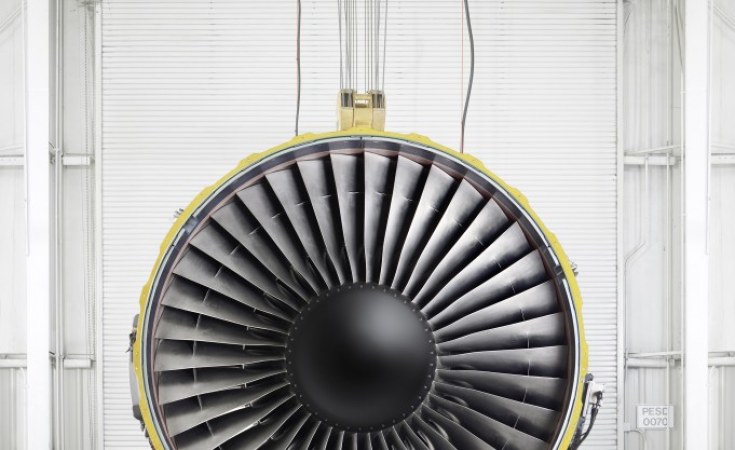 Photo: GE Aviation
GE’s mobile power plants, which are generating electricity in Algeria. Egypt and elsewhere in Africa, are built around technology developed for jet engines like this CF6. Similarly to the Power Haul example above, the technology is part of the GE Store that allows GE to share know-how across industries and quickly develop new products customers need
Content from our Premium Partner
GE Africa (Lagos)
By Mark Egan and Tomas Kellner

One easy way to see Africa's power problem is by looking at a picture of the Earth from space at night. While other inhabited regions of the world glow and sparkle like jewels in a black velvet display case, Africa remains largely dark. That's because the continent's 1.1 billion inhabitants have at their disposal just 185 gigawatts (GW) of installed power-generation capacity. The United States, by comparison, can draw on 1,000 GW for 300 million people. "That statistic alone tells you there is a huge gap," says Stephane Charrieau, GE Hydro's sales leader for Europe, the Middle East, and Africa.

The stark contrast is only the beginning the story. Africa is also the fastest-growing continent, with a population expected to hit 1.8 billion by 2050. The new generations will need a reliable supply of electricity to power factories, expand the economy and create jobs. "We'll have a huge issue if we simply do nothing," Charrieau says.

The good news is that the continent is rich in energy resources. Nigeria, Algeria and Egypt straddle some of the world's largest natural gas reservoirs. Mozambique, Zimbabwe and South Africa have huge endowments of coal. Morocco, Senegal and parts of East Africa are good candidates for wind power, and huge swaths of Southern and West Africa are ripe for hydroelectric projects. "There are even excellent geothermal-power prospects in the East African Rift Valley, which runs from Ethiopia to Mozambique," says Charrieau, referring to the process of generating electricity by harnessing the Earth's internal heat.

There are a number of companies that can assist local governments with tapping these resources. But one of them, GE, can help them harness several at once. "We'll have all kinds of technology — gas, steam, coal, wind, hydro and nuclear power — in all kinds of sizes," Charrieau says.

Mobile power plants, distributed power systems and even wind farms with GE technology are already generating electricity on the continent. Last fall, GE's acquisition of Alstom's power and grid business expanded its portfolios of gas turbines and steam turbines needed for coal-fired plants, and even turned the company into a hydropower player. It also allowed GE to start building the distribution lines that take electricity from power plants to where it's needed. 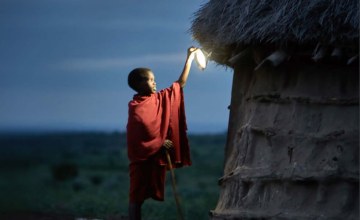 "One easy way to see Africa's power problem is by looking at a picture of the Earth from space at night," writes GE Report's Mark Egan and Tomas Kellner. "While other inhabited regions of the world glow and sparkle like jewels in a black velvet display case, Africa remains largely dark because the continent's 1.1 billion inhabitants have at their disposal just 185 gigawatts (GW) of installed power-generation capacity." More about GE in Africa in this BRIEFING.

Today, large GE gas turbines are the perfect fit for North African countries with relatively mature gas industries such as Egypt. States like Ghana and Cameroon, which have struggled to achieve large-scale production from their gas fields or have not been able to transport the fuel to power demand centers, can take advantage of smaller turbines and engines used for local power generation. They produce between 5 and 50 megawatts (MW).

Many GE turbines include efficient designs originally developed for GE aviation. A Nigerian milling company is using a sturdy engine with components from a GE locomotive. They illustrate the power of the GE Store — the ability of the company to move knowledge around and quickly respond to local demands.

Charrieau says GE will have "unparalleled reach in Africa" with Alstom. In North Africa, Alstom's turbines and alternators produce around half of Morocco's electricity. Its technology has expanded GE's existing footprint in Algeria and Egypt. GE has traditionally been strong in West Africa, supplying some 2.5 GW of Nigeria's power-generating capacity. In renewables, Alstom has provided equipment for Bujagali's 250 MW hydropower plant in Uganda and Grand Renaissance's 3 GW project in Ethiopia. The company also has a big wind presence in Morocco and hydroelectric plants in operation or under construction in Uganda and Zambia.

There are more opportunities. South Africa, the only African country with a commercial nuclear power plant, could soon sign off on as many as eight reactors, generating 9.6 GW. The cost of the project, which Pretoria wants to complete by 2029, could be as much as $100 billion.

Taken together, GE now has the power to brighten up the face of Africa, both from space and on the ground.