6 Months Into Office, President Adesina Shares His Vision for the Bank and for Africa 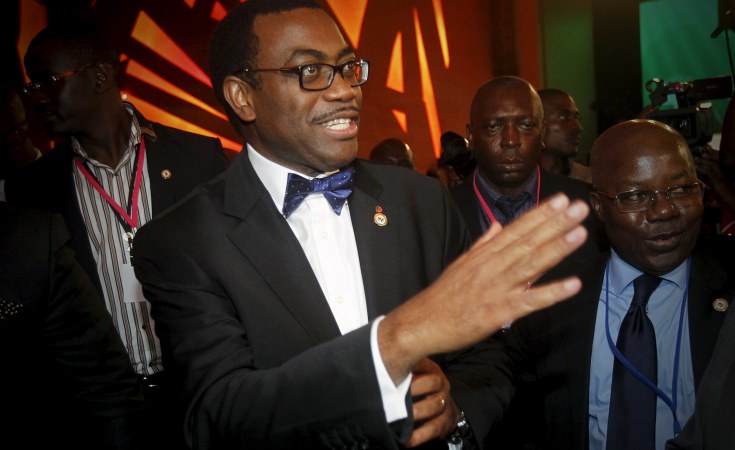 AfDB
"In my new role at the helm of the African Development Bank, I am implementing a ten-year strategy designed to bring about nothing less than the economic transformation of this continent, built on growth that is both inclusive and green. The strong growth we have seen across the continent since the Millennium counts for nothing if it is neither shared nor sustainable. [There] are the five pillars of the vision I set before the Bank at my swearing in on the first day of this month... The High 5s, I call them. They are achievable. They are fundamental to Africa, and Africa in turn is fundamental to the SDGs. This continent is their testing ground" - Akinwumi Adesina, President of the African Development Bank.
Content from our Premium Partner
African Development Bank (Abidjan)

Six months into office, African Development Bank President Akinwumi Adesina looks back on his accomplishments and shares his vision for the Bank and for Africa over the next decade.

In a 10-minute video, the President describes his vision for a better integrated Africa, with a wider market where people can travel everywhere without restriction, with better infrastructure linking the countries, in terms of air travel, rail and water navigation facilities to be able to link our markets. "I see in 10 years an Africa that would be able to feed itself, that is able to take advantage of all the resources it has. A more competitive Africa on the global the market. In 10 years, I expect to see an Africa that is totally lit up, that has universal access to electricity, an Africa that is not in darkness.

"I'm very excited about what I'm doing as President of the African Development Bank. When I was elected the eighth President of the Bank, I did say very clearly that we were going to work on five critical issues, which I felt were the most important challenges facing Africa." Those development priorities are now known as the High 5s - to Light up and power Africa, Feed Africa, Integrate Africa, Industrialize Africa, and to Improve the quality of life for the people of Africa.

"I'm terrifically excited that there's so much energy around these five areas," said Adesina, adding that they have been embraced by development partners and African leaders alike.

During his first six months in office, the Bank has been engaged in trying to form global alliances around these five development priorities, Adesina said. The AfDB played a key role at the UN climate talks in Paris (COP21) in December, bringing together African leaders and supporting the African Group of Negotiators, who pushed for a climate agreement that was in the interest of Africa. At COP21, the AfDB and partners launched the African Renewable Energy Initiative (AREI), which aims to provide 300 gigawatts of electricity across Africa by 2030.

At the Bank's High-Level Conference on Agriculture in Dakar in October, the Bank invited Ministers of Finance and development partners to look at agriculture as a business, a viable source of employment for youth, particularly in rural areas, and a path to food security. The conference also announced a range of initiatives aimed at raising agricultural productivity across the continent.

At the World Economic Forum in Davos 2016, the AfDB launched a Transformative Partnership on Energy for Africa with the participation of global CEOs, and partners, including the United States Government's Power Africa initiative, UK Government and the United Nations, to mobilize public- and private-sector financing.

"We still have well over 645 million Africans that still do not have access to energy," said Adesina. "That is totally unacceptable."

Adesina pledged to do more for girls' education, to make sure girls stay in school and are not forced into early marriages. He called for Affirmative Finance Action for Women, a new initiative to leverage finance for women-owned businesses and female entrepreneurs in the agriculture sector. He also announced a Bottom of the Pyramid Energy Financing Facility for Africa that will give 700 million people access to clean cooking energy.

The African Development Bank is Triple-A rated, said Adesina, which means the Bank can mobilize more money to do more for African countries. "We want to be a first-rate Bank that delivers impact at scale in Africa. We want to be that Bank of reference, that Bank of choice for our regional member countries. I think we are on the right path for that."

On his vision for the institution, Adesina indicated that he wants to reorient the Bank to become more development impact oriented, with the right people in the right jobs, and streamlined processes. "I don't want a Bank that is an elephant. I want a Bank that is like a lion." The Bank's new business model proposes, among other things, increased decentralization to enable the Bank to work more closely with its clients on the ground and in the field, he said.

"I don't see my position at the African Development Bank as a job. It's not a job. It's a mission," said Adesina. "I am driven constantly by a greater ambition for Africa. This can be a greater continent. I want us to develop Africa with pride. That's what drives me every single day."