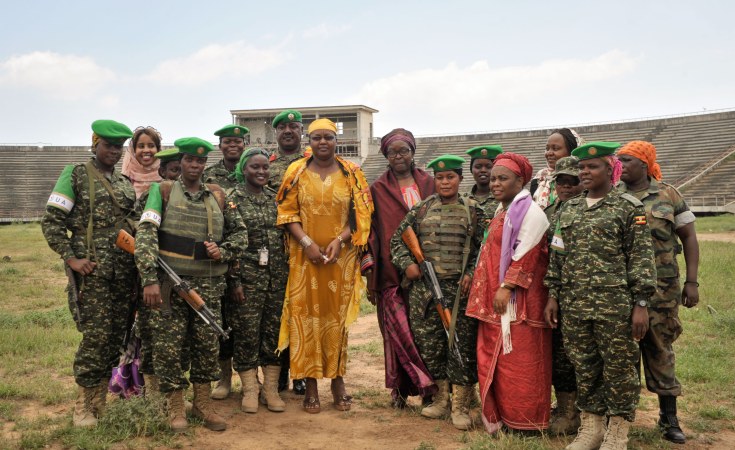 Photo: Union Africaine
Ms. Bineta Diop of Senegal, Special Envoy of the Chairperson of the AU Commission on Women Peace and Security with Women Peacekeepers in Somalia.
Content from our Premium Partner
African Union (Addis Ababa)

In January 2014, the Chairperson of the African Union Commission, HE Dr. Nkosazana Dlamini Zuma decided to appoint a Special Envoy on Women, Peace and Security (WPS) with the task “to ensure that the voices of women and the vulnerable are heard much more clearly in peace building and in conflict resolution”. She entrusted Mme Bineta Diop, a long standing civil society women’s advocates with the role of first AUC Special Envoy on Women, Peace and Security and a clear mandate to promote the protection and advancement of the rights of women and children, in particular those affected by conflicts.

The mandate of the Special Envoy is anchored on the priority pillars of the landmark United Nations Security Council Resolution 1325, following UN related resolutions and African Union instruments and policies. It is hence articulated around three main strands:

-        The prevention of violence against women and girls in conflict and other situations of insecurity;

-        The protection of women and girls from sexual and gender-based violence, including in humanitarian situations;

-        The participation of women at all levels of decision-making in the prevention, management, resolution of conflict and peace building processes.

The office opted to orient its actions through four strategic approaches:

-        Advocacy to raise the voices of women and bring at the fore front their concerns and priorities;

-        Support and enhance the implementation of protocols and declarations on the women, peace and security agenda;

-        Build synergy within the African Union Commission and Organs;

-        Strengthen partnerships and mobilize resources for the WPS Agenda.

Since its inception, the office has prioritized concrete actions focused on understanding the realities of conflict affected communities through direct interaction with them, to offer solidarity and close consultation, and to hear and understand their views on resolving their situations.

The office has organised solidarity missions to Somalia, Nigeria, the Central African Republic (CAR) and South Sudan, to support communities and in particular women affected by conflict in those countries,  and to relay their concerns to decision makers for sustainable actions. In CAR, in May 2014, together with UN Women and the Economic Community of Central African States (ECCAS), the OSE successfully engaged with political leaders, met with internally displaced persons (IDPs) living in camps, and with Civil Society Organisations (CSOs), where they agreed to launch a long-term project, known as “Wali Tisiriri”, Women for Peace, to support women in CAR to participate in peace-making, peacebuilding and the reconstruction of the country. The OSE also supported the women of CAR in their preparations for the National Reconciliation Forum that took place in Bangui from 4 to 11 May 2015.

In Somalia, women clamoured for more participation in the political processes and increased participation in elections. They also requested for all-female police contingents which they believe ensure better safety.

In Nigeria, the OSE supported the networks led by women for peace which came together to demand for the release of the abducted Chibok school girls. It also raised concerns on the conditions of IDPs, and of women in refugee camps.

In addition to supporting local women’s networks in their engagements nationally, the OSE has supported the creation of women’s networks for peace at sub-regional level. Examples include the Regional Platform of Women of the Sahel which comprises of women’s groups from Burkina Faso, Chad, Mali, Mauritania and Niger, to address the deterioration of the security and humanitarian situation in the region, the IGAD Women and Peace Forum, and the Women’s Platform for Peace in the Great Lakes. While nascent, these networks are important vehicles for women from across parliaments, civil society, and government to engage in actions to advance the WPS agenda.

The OSE’s action oriented approach includes promoting the AU zero-tolerance policy on gender based violence within its own peace support operations. Indeed, this constituted an area of extensive engagement during her visit to Somalia.

A central tenet of the work of the office of the Special Envoy is the formulation of a “Continental Results Framework to monitor the implementation by AU Member States and other relevant stakeholders of the various instruments and other commitments on WPS in Africa”, at the request of the AU Peace and Security Council.   Sixteen (16) countries and three (3) regional economic communities (RECs) have developed actions plans on the women, peace and security agenda (WPS). In December 2015, the OSE convened those Member States and RECs to review progress and challenges on implementation, as well as consider a draft continental results framework to track performance on WPS commitments at all levels.

The office has undertaken a number of high level activities, in partnership with UNWOMEN, OSAA, and others, to build a constituency and groundwork for the results framework.

The OSE also engages in high level advocacy activities. During the June 2015 AU Summit, the OSE hosted the Right Hon. William Hague and Actress Angelina Jolie-Pitt, co-founders of the “Preventing Sexual Violence Initiative –PSVI”, to call for an end to gender based violence and to highlight the importance of strengthening the capacities of women and creating centres of excellence on WPS. In line with efforts to enhance the participation of women in election observation and mediation, the Office has embarked on the training of women in election observation and dispute resolution in partnership with regional centres of excellence including the Kofi Annan International Peacekeeping Training Centre in Ghana and the Pan-African Centre on Gender, Peace and Development in Senegal. To date, the Office has undertaken two rounds of trainings, which will form the basis of a roster of qualified women for senior level mediation and election observation roles.  Ultimately, OSE aims to establish partnerships with a number of Centres of Excellence in each region of the continent to ensure continuity and sustainability of the endeavour to build capacity for women who will champion the women, peace and security agenda.

During the 15th Anniversary of UNSCR 1325 at the Global level in New York, the OSE launched a booklet titled, “The African Union: 15 Years of the Women, Peace and Security Agenda in Africa: Stocktaking and Perspectives”. The Envoy also engaged with media leaders during the 2015 African Media Leaders Forum that took place in South Africa in November 2016, in order to build partnerships for gender sensitive reporting on peace and security in Africa.

In order to support the implementation of the women, peace and security agenda in Africa through enhanced partnership and resource mobilization, the Special Envoy travelled to the United Kingdom and Norway, and accompanied the Chairperson of the African Union Commission, Dr. Dlamini Zuma, on working visits to Sweden and other Scandinavian countries where AU traditional partners on the Gender, Peace and Security Programme supported the work of the OSE and of the Commission with financial commitments.

The OSE has brought a unique combination of focus on enhancing the participation and voice of civil society and local organizations within regional fora and with decision-makers and amplifying the voice of conflict affected women while also embarking on high level advocacy with AU Member States, partner countries, and relevant institutions. It has pushed quite clearly for a focus on implementation and monitoring of commitments on WPS with the motto “No more solemn declarations, but solemn action”.

Tagged:
Copyright © 2016 African Union. All rights reserved. Distributed by AllAfrica Global Media (allAfrica.com). To contact the copyright holder directly for corrections — or for permission to republish or make other authorized use of this material, click here.