Namibia: 'Yes We Can' – Kameeta on Ending Poverty 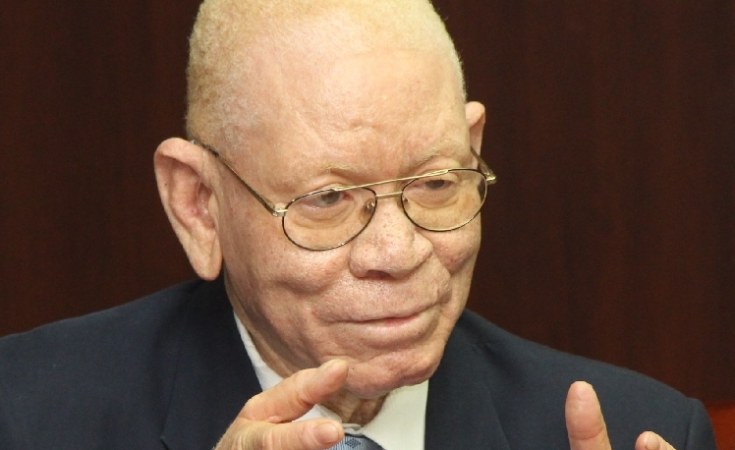 He says he "gently protested" when President Hage Geingob tapped him to be Namibia's Minister of Poverty Eradication and Social Welfare. "I was looking forward to being quiet with my wife," he says. "I've reached 70 years. I worked and did what I could."

That work included opposition to rule by South Africa's apartheid regime, which detained him in solitary confinement during Namibia's freedom struggle. After independence in 1990, he was elected to the Constituent Assembly and to Parliament and served as deputy speaker of the National Assembly.

But "the deep suffering and levels of poverty" among Namibians, Kameeta says, along with the commitment of Namibia's third president to end it, persuaded him to head the new ministry,

As a pastor of the Evangelical Lutheran Church in Namibia since 1972 and a former principal of its seminary, Bishop Kameeta had long been a champion of the poor. "I don't know how the people are living," he told Lutheran World Information last year. "You can see the situation in the faces of the people, the hopelessness. People literally have nothing."

And yet, Namibia is 'rich' – classified as upper-middle income by the World Bank, and therefore not eligible for development financing such as grants and concessionary loans.

The problem is that Namibia's income distribution is among the most unequal in the world, in part due to three decades of harsh German colonialism followed by 70 years of white South African rule.

Despite a relatively high economic growth rate since independence and progress on extending health and education services, the richest five percent of Namibians account for over 70 percent of the GDP. Most of them are descendants of German and South African settlers, although a new black elite is emerging.

Among the most contentious issues is land ownership. The country's constitution – negotiated under the auspices of the United Nations – prohibits expropriation of land without the agreement of the landholder. As a result, the eight percent of Namibia's 2.3 million people who are white still control nearly 90 percent of the land.

Kameeta has said that land reform can help people out of poverty and that the government must have a constructive national dialogue on the issue. Speaking at a screening of the documentary Dwaal Net Rond - The Forgotten about rural Namibian farmers by German filmmaker Thorsten Shutte, Kameeta said the film illustrates a lack of coordination among government ministries and agencies that must be addressed.

President Geingob also sees the land issue as critical – and complicated. As early as 1991 he chaired a conference on land reform that "got stuck" on the issue of "who can claim to be the original owner of this land," he told AllAfrica last year. "Perhaps the San people, also called Bushman, can claim that," he said. So "it's time to move beyond that" question: When settlers came a hundred years ago, they stole the land. They didn't buy it. But their children were born here. Our requirement for citizenship is that you are born here. We cannot kick out the white person who inherited the land from the father. But how about me? I was born on the white man's farm. We have to find a balance – meet half way.

Both the president and the minister say that in a country where most people live off the land, some form of redistribution must happen. But they also agree that just as poverty is multifaceted, the solution must be as well. Education, skills development, job creation and improvement of health services must be addressed across all sectors of government, business and civil society.

"When we started [the Ministry of Poverty Eradication]," Kameeta says, "the president told us: 'There is a lot of research done, especially by the national planning commission, together with the UN agencies. I'm not saying you must ignore the research that has been done. But I want you to listen to the Namibian people. What do they want? How do they see poverty eradication?'"

As a bishop, he says, he had traveled, visiting in homes, seeing the plight of the poor. The church he led, which counts as many as three-quarters of Namibians among its members, had forged a coalition of religious, business and civil society organizations to press government for a basic income grant program for the country's poorest.

President Geingob told the new minister to travel the country again and talk to people. "I was not so sure at the beginning," Kameeta says, "because our time was very much limited. and we had to set up the ministry. We had to appoint people, put them into positions and so forth. But we traveled – for more than 10,000 kilometers all over Namibia, visiting the 14 regions."

The response was overwhelming. "We gathered information from all the regions and made it the basis of a blueprint for this ministry and for our government."

For the minister, the travels were revelatory. "I thought, 'I know Namibia, I know the poverty levels'," he says. But when people came in multitudes to meet the new minister and officials of different ministries, he saw and understood more. "These people are desperate," he says "and there is a lot of expectation and no time should be wasted."

A lack of power and infrastructure, for example, has pervasive effects. People told of privation in the midst of plenty. "Even for those who are five kilometers from the rivers, the big rivers we have, the Kunene, the Kavango, the Zambezi," says Kameeta, "were complaining of being thirsty."

The minister would not want anyone to think that Namibia has not made progress since independence. "Our government has done a lot," he says. "Many things are in place. But we have a serious problem of implementation – of implementing what we decide." His ministry aims to help coordinate a more effective response.

At the same time, Kameeta said, there are "things which must be addressed immediately." He backs providing a basic income to support families, so that no child is stunted by malnutrition. He supports the president's plan for food banks, administered by jobless young people trained to do the work in their communities.

"People are trying to help themselves," he says.  "This ministry will never eradicate poverty alone, but together with the poor. We have to constantly listen. Of course, we have to our disposal the knowledge of the expert, which can be used also. But the most important is that we need the voice of this people. They have to identify themselves with what we are doing."

Kameeta scoffs at the argument that poverty can be reduced but not eliminated. "The people who are saying this are the people who have reduced considerably or have eradicated poverty in their own lives!" he exclaims. "Why should it be impossible to eradicate poverty in the life of the whole nation?"

The retired bishop takes inspiration from the parable of the loaves and fishes in the Bible, where, he explains, the miracle of feeding the thousands required sharing. Those who today insist poverty cannot be eradicated, he says, "that's people who don't want to share! They don't realize it is by sharing that you receive more."

Eliminating poverty is not about creating billionaires, Kameeta says. "It's a decent shelter and seeds to cultivate. Sending children to school. Having enough for the children to eat in the morning and something to eat when they come back – that's what we want. That's poverty eradication. Why is it not achievable?"

Kameeta says he expects to serve only one term. "That's why each and every second in this ministry is for me so important. I hope that after five years, well, I believe that the foundation will be laid – not by me or the officials here in the ministry, but together with the people, for sustainable development for eradicating poverty."

This has become his new ministry, Kameeta says. And he thanks God for the opportunity.

Tagged:
Copyright © 2016 allAfrica.com. All rights reserved. Distributed by AllAfrica Global Media (allAfrica.com). To contact the copyright holder directly for corrections — or for permission to republish or make other authorized use of this material, click here.