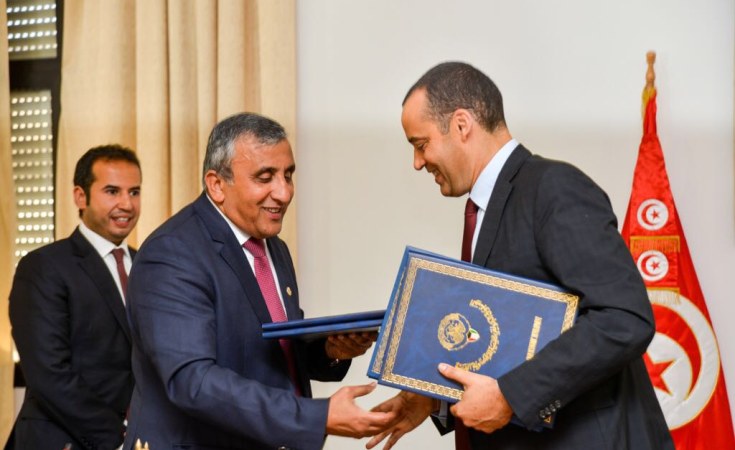 A Loan Agreement was signed today in Tunis between the Government of Tunisian Republic and Kuwait Fund for Arab Economic Development whereby the Fund will extend a loan of Kuwaiti Dinars twenty two million (KD. 22,000,000/-), equivalent to about 74.8 million US$ and Kuwaiti Dinars to contribute in financing of Rehabilitation and Development of Potable Water Systems Project in the Tunisian Republic, whereas a Project Agreement relating to the implementation of the Project was signed between Kuwait Fund and the Societe Nationale d'Exploitation et de Distribution des Eaux of Tnisia.

A Technical Assistance Agreement was also signed today in Tunisia between the Government of Tunisian Republic and Kuwait Fund for Arab Economic Development, whereby the Fund will extend an amount of one hundred thousand (KD 100,000), equivalent to US$ 340,000, for the preparation of technical and economic feasibility studies of the "Reclamation and Improvement of Monastir Bay (Second Phase) Project.

The Project aims to contribute in meeting the increasing demand for drinking water and optimal use of natural resources and protection of the environment and public health, and to contribute in raising the efficiency and reliability of water facilities in several states in Tunisia inhabited by about 3.8 million people, and which is expected to increase to 5.6 people by 2045.

The Project consists of preparation works of sites, land acquisitions, the extension and rehabilitation of about 220 kilometer  of potable water transmission and distribution  networks with diameters ranging from 160 to 1400 mm, water facilities including ground and tower type drinking water storage, pumping stations, desalination of sea water with all the necessary equipment from the connectors and valves and civil works and electromechanical systems, Instrumentation and control and the consultancy services to provide areas of Greater Tunis, Sousse and major Zaghouan neighboring North Western region cities and QarQennah Islands and the southern region of East with drinkable water.

The Loan will be for a period of 25 years including 5 years grace period, and will be amortized in 40 semi-annual installments, the first of which will be due on 1st date on which any interest or other charge on the Loan shall fall due after the elapse of the above mentioned grace period.

The Loan bears an interest rate at 1.5% per annum, in addition to 0.5% per annum to cover administrative costs and other expenses incurred in the implementation of the Loan Agreement.

Whereas the technical assistance was granted for the preparation of technical and economic feasibility studies of the "Reclamation and Improvement of Monastir Bay (Second Phase) Project, which aims to cleanse and to create and develop the Monastir Bay by eradicating of the marine and industrial pollution and sewage, and create a suitable environment for tourism and investment.

Upon signature of this Loan Agreement, this Loan will be the 34 loans extended by the Fund to Tunisia, considering that the Fund had already extended 33 loans to it, totaling about KD 173 million (equivalent to about US$ 588.2million)  to finance projects in various sectors.