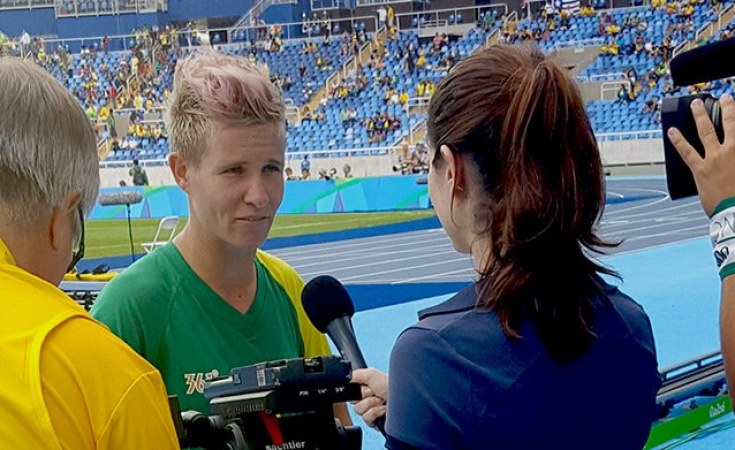 SAFA
South Africa's Banyana Banyana captain Janine van Wyk being interviewed by the press in Rio after her team lost 1-0 to Sweden in the first match of the 2016 Rio Olympic Games currently underway in Brazil. South Africa's SABC is one of many African broadcasters sending a team to Rio to provide regular updates. Broadcasters covering the Rio games will operate from within the GE-powered International Broadcast Center from where their broadcast signals will be beamed to their various countries.
Content from our Premium Partner
GE Africa (Lagos)

Think of the preparation for the Olympic Games as running on twin tracks: one for the athletes and the other for the host city. Both will be subjected to extraordinary demands as they go on show to the world. Both have one chance to get it right for these Games.

Just as the athletes train their hearts out for their Olympic Games dream, world-class infrastructure must be built and conditioned to make a city fit to host it. Hundreds of thousands of athletes and supporters are coming, and all of those new sporting venues and accommodations need services and utilities robust enough to cope with the influx: energy generation and distribution, lighting for venues and public places, water treatment and transportation. Like a giant squad of exacting coaches, broadcast crews are flying in, too, demanding souped-up, super-reliable electricity to power the International Broadcast Centre, enabling them to share the competition with more than 5 billion fans around the world. Don’t try whining to them about an outage.

GE is a worldwide partner of the Olympic Games and has contributed to more than 170 infrastructure projects for Rio de Janeiro, South America’s first host city. Getting a city in shape to welcome the Games is “perfectly in line with GE’s portfolio of businesses”, says Chris Katsuleres, GE’s director of Olympic and sport marketing. He reels off a few of GE’s main events: “Additional energy capacity, lighting for stadiums, energy-management systems for venues, healthcare for athletes…”

Katsuleres has been working on GE’s Olympic sponsorship since the company signed on as a worldwide partner in 2005, for Torino 2006 and beyond. “The Olympic Games are about excellence and performance, and that lines up with the GE brand values,” he says.

The breadth of GE’s critical-infrastructure contributions to Rio 2016, featuring the company’s latest digital-industrial technology, makes a perfect dais for the GE Store, where technologies and ideas are shared between GE’s businesses to provide innovative solutions for each other. One example of the GE Store’s translated industrial applications is GE Aviation’s jet-engine technology being deployed in aeroderivative gas turbines. And GE Healthcare’s advanced medical-imaging technology can now be found in several industrial applications, such as GE Oil & Gas using CT scans to analyse rock samples, and GE Aviation using it to non-invasively inspect its LEAP engine blades. The Power business uses adapted digital X-Ray for a range of field-inspection applications, and ultrasound technology originally developed for medical use can now be found in ultrasonic flaw-detection equipment, used in the field and on the factory floor. That’s just a sample of smart technology transfers between businesses, largely being driven by GE’s nine Global Research Centres (including one in Rio), where 3,600 scientists and engineers work across all of the businesses, striving for the next technological win.

At the Rio 2016 Olympic Games, “we’ve got eight different businesses contributing technologies and solutions”, says Katsuleres. “And we’re also leveraging research out of our Global Research Centre in Rio for the digital-performance management of a Brazilian sports team … it’s a great embodiment of what the GE Store is all about.”

More than 100 technical and service staff working on GE’s Rio projects during the Games will be from GE Brazil, supplemented by international specialists arriving for the pointy end of the project. Many more have been involved in the planning, manufacture, delivery, installation and commissioning to get everything in place and operating in time for the opening ceremony of the Olympic Games on August 5. “This project extends out way beyond GE Brazil,” says Katsuleres. “We’ve got products from all over the world: China, Poland, the United States, India, Hungary, Brazil. You can see that connection back to the breadth of GE and the GE Store coming to life through what we’re doing in Rio.”

The Games partnership, says Katsuleres, resonates with GE’s employees in 180 countries around the world: “It’s not just about being a sponsor. Our employees know that GE makes significant contributions to the enablement of the Games … delivering the solutions that help the host cities put on the Games.”

Katsuleres talks GE Reports through some of the key areas where GE is powering the Games, as well as a high-tech training programme for a local sports federation and the company’s legacy gift for Rio de Janeiro.

“If we take one venue, the International Broadcast Centre [IBC] as an example, it is perhaps one of the most critical infrastructure building facilities during the Games, even though it won’t host any athletic competitions. There are 5,000 production staff working in that building to send the broadcast feed out to the world. GE’s energy management and distribution equipment will be powering the IBC. We also play a critical role in the energy-redundancy strategy that the IOC has in place … backup power in case of any failures of the prime power coming off of the grid.

“We’ve got more than 3,000 UPS [Uninterruptible Power Supply] single- and three-phase systems that will be deployed across every venue in Rio, including the IBC. We’ve got 65 power transformers and a host of electrical-distribution equipment, from low-voltage panels to switchgear. And there was a need for additional power-generation capacity for the city as a whole, so we’ve got two big power projects that have been deployed there. So we touch the whole area of power and energy at multiple levels in Rio.”

“In lighting for the stadiums and arenas, the real challenge is the standards that are required for Olympic Games broadcast. As a partner, we’ve worked very closely with the Olympic Broadcasting Services, which produces the global feed for distribution to the broadcast partners. They have very, very exact standards and we’ve had to deliver lighting solutions for indoor arenas and outdoor venues to those requirements.

“We’ve got several projects around municipal lighting, focused on a transition from traditional lighting to more energy-efficient LED solutions. Our two big projects are in Flamengo Park and in Lapa, the central business district.”

“The Polyclinic is our closest technology connection to athletes. It’s the medical services venue for all 10,000 athletes who will come to Rio. We’re supplying a full complement of diagnostic imaging modalities, ranging from MRI to ultrasound and digital X-Ray. Those technologies, coupled with GE Healthcare Digital solutions for diagnostic imaging, are there to provide the best of possible care to the world’s best athletes. These athletes have trained their whole lives for that opportunity to represent their country at the Olympic Games. Injury is a function of sport and, when that happens, we’re providing those diagnostic imaging tools for the medical professionals to be able to best assess what’s going on and to be able to, in a perfect world, get the athlete back to competition, so that they can compete and hopefully fulfill their lifelong dream.”

“As well as our equipment provision, for the first time in Rio, we will have GE’s electronic medical records system, Centricity Practice Solution. Previously, athletes coming into the Polyclinic would be filling out forms on paper and trying to answer as best as they could questions on their medical background. We were at the pinnacle of global sport and using paper-based medical records … it didn’t seem like that fit! Now, when an athlete is admitted to the Polyclinic, they scan their accreditation, pull up all the relevant information and create a medical record that will be accessible from any workstation in the Polyclinic. It will connect to all of the diagnostic imaging modalities, and all the information and data specific to that athlete will sit in one medical record, which is accessible to all of the medical professionals in the Polyclinic. It’s such a night-and-day difference to how it has been operating.”

“In each of the host countries, GE also sponsors one of the national sporting federations. It’s a way for us to connect and support local athletes. For Rio, we’ve partnered with the Brazilian Canoe/Kayak Federation. They were very interested to see what we could do from a technology standpoint, so we worked with the team’s performance director and coaching staff, partnering them up with data scientists from GE’s Global Research Centre in Rio. We developed a truly world-class data-recording and data-analytics system for them. The coaches have real-time access to all of the data from the athletes’ training. They’re able to monitor their pace and athlete biometric data and look at that compared to all of their past training runs, relative to their competitors, to work out how they can get that extra half-second out of their performance. In that sport, one-quarter of a boat length can represent first-to-fourth. That’s a good example of GE’s digital-industrial technology and data-analytics capabilities coming to life through a project that’s tied to athletes’ performance.”

“For each host city over the past several games, we’ve looked for what we can give back to the community. For Rio, we started having conversations several years ago with Mayor Eduardo Paes about the city’s specific needs. He directed us to think about what we could do for city-run hospitals, because they look after primarily the under-served community and were lacking in modern technology. We spoke with the director of the largest city-run hospital, Souza Aguiar in downtown Rio, and discovered that much of their diagnostic imaging equipment was 20-plus years old, or analogue technology. We worked with the hospital to define specific needs and donated a full range of diagnostic imaging equipment. It means that more patients can be treated faster and will increase their efficiency in patient surgeries, for example, by upwards of 30%. That’s going to leave long-term benefits for years to come in that community.

“The second legacy-gift project was the lighting at Flamengo Park and the Lapa area. We’ve relamped those two public areas with GE’s LED floodlighting. It’s much more energy-efficient, and therefore cheaper for the city to run, and will provide a safer environment for families to be able to benefit from the park at nighttime, with the added benefit of the telemanagement systems and ongoing savings on energy for the city. Those are long-term benefits for the city, too.”