Benefits Beyond Borders: How ATAG is Furthering the Sustainable Growth of Aviation 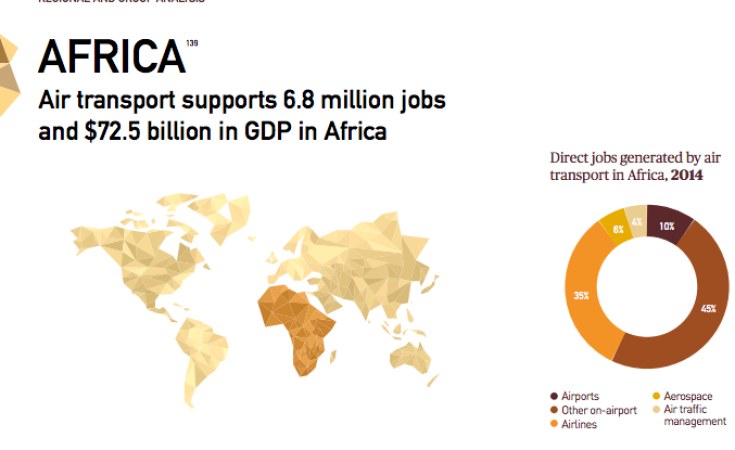 Air Transport Action Group (ATAG)
“A significant factor in our work on sustainable development is the industry’s world-leading climate action plan. We need support from governments around the world to agree on a key part of that plan at the upcoming International Civil Aviation Organization Assembly, where we hope an agreement can be reached on a global offsetting scheme for air transport. It is a vital part of our industry’s future role in helping to support development worldwide.”
Content from our Premium Partner
GE Africa (Lagos)

Air Transport Action Group (ATAG) issued Aviation: Benefits Beyond Borders last month that focuses on the myriad of benefits that aviation brings to the world today and well into the future. GE Aviation spoke with Michael Gill, ATAG Executive Director about the report's findings and how aviation can continue its sustainable growth.

Why did ATAG release this report?

Michael Gill: Aviation really is a unique industry. We are the only mode of transport that can move people and goods to almost anywhere else in the world within a day. Without air transport, today's global economy would look very different. The purpose of Aviation: Benefits Beyond Borders is to show the impact that global air transport has on the modern world. Air travel has become so widespread that people can sometimes take for granted just how important it is. As well as being a major employer and driver of economic growth, aviation also generates significant social benefits, which are explored in the report.

However, air transport also comes with an environmental cost. What we argue in this report is the need for balance. We need to address the issue of aircraft CO2 emissions, while retaining the undoubted and numerous benefits of air travel. And this is exactly what the whole industry is striving to achieve.

The report details very interesting facts about aviation's impact on global economic growth and forecasts aviation-supported jobs worldwide will increase to more than 99 million and Gross Domestic Product (GDP) to $5.9 million in the next 20 years. But it states that to achieve these benefits will require appropriate support from governments. What type of support is needed?

Michael Gill: ATAG's members, which represent all sectors of the aviation industry (airlines, airports, manufacturers and air traffic management), all agree that support from governments and intergovernmental institutions is vital if the industry is to grow, particularly in a sustainable manner. In 2015, all sectors of the industry joined together to deliver an open letter to representatives of all the world's governments. The letter focused on five main requests:

These requests all have an environmental focus and would allow the sector to continue to grow in a sustainable manner, but there are other measures governments can take to maximize the economic contribution of the air transport sector. Easing or removing restrictive tax regimes and signing international open skies agreements are steps that governments could easily take to support the industry and reap its many benefits.

How is the report being used by governments?

Michael Gill: The previous reports have been sent to governments and other regional institutions such as the African Union, and we are always happy to see facts and figures included in speeches and reports. But more importantly, when the full range of benefits are gathered together and put on paper, we hope that governments will take stock and consider just how important the aviation industry is and appreciate the need to support its role in the modern world.

Sustainable development is also a key theme in the report. What does this mean for the aviation industry, and how is the industry supporting this set of 17 goals, which were announced by the United Nations as part of the 2030 Agenda for Sustainable Development?

Michael Gill: When we sat down to plan this report and decided on using the Sustainable Development Goals as a theme, we were struck by how aviation plays at least some part in supporting 14 of the 17 goals. Goals such as 'decent work and economic growth' and 'industry, innovation and infrastructure' are clearly supported by aviation, but other less obvious goals such as 'good health and well-being' or 'quality education' can also be aided by aviation. We want to take this quick analysis for the Aviation: Benefits Beyond Borders report even further and are exploring ways that we can have a more comprehensive look at the way air transport can support the goals.

What are the key challenges for the aviation industry now and in the future?

Michael Gill: The main challenge for aviation now and in the coming decades is without a doubt sustainable development, but it is a challenge that the whole industry is committed to meeting. We are keenly awaiting the outcome of this year's ICAO Assembly, where we hope an agreement on a global offsetting scheme for aviation emissions will be made, allowing us to meet our goal of carbon-neutral growth from 2020. However, this is only meant to be a temporary measure.

We, as an industry, have the long-term ambition to halve aviation's net CO2 emissions by 2050, based on 2005 levels. With billions of dollars being put into technological research and the commercialization of sustainable alternative fuels, we are confident this goal can be achieved. As ever, the support of governments is needed to help us in this endeavor.

Aviation is a unique industry where partnership across all parts of the sector play such an important role day-to-day. We have already seen how powerful that collaboration can be when deployed on long-term issues such as climate change. Now we should look at how the industry can join together on other sustainable development topics (not limited to environment, either. See the full list of UN SDGs). So I'd put the call out to all our industry colleagues: what challenges do YOU think we need to focus on next as a sector? What else can we do to help ensure sustainable aviation into the future? Let us know!

You can contact the Air Transport Action Group with your ideas on how to build a sustainable aviation sector well into the future. Email Calum Smith on smithc@atag.org.