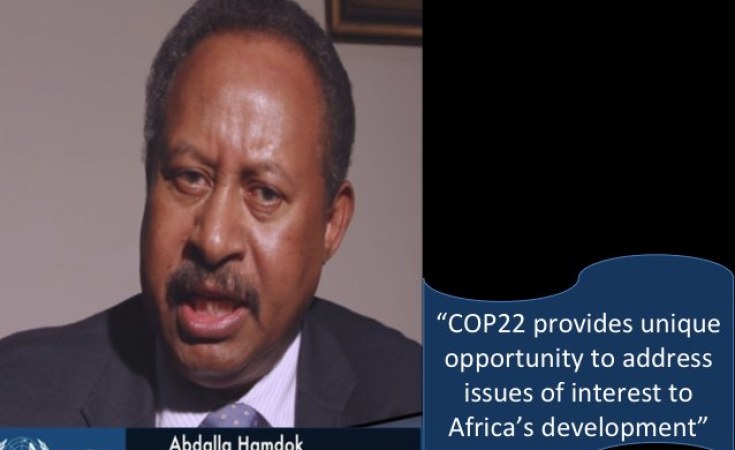 ECA
Abdalla Hamdok led the ECA Delegation to the 22nd session of the Conference of Parties (COP22) of the United Nations Framework Convention on Climate Change (UNFCCC), taking place in Marrakesh, Morocco from 7 to 18 November 2016.
Content from our Premium Partner
United Nations Economic Commission for Africa (Addis Ababa)

Statement by Abdalla Hamdok, acting Executive Secretary of the United Nations Economic Commission for Africa on the historic entry into force of the Paris Agreement on climate change

Today marks the historic entry into force of the Paris Agreement on climate change. It is significant for the global commitment to hold global warming to no more than 2C above pre-industrial levels - a threshold that scientists regard as the limit of safety, beyond which climate change is likely to become irreversible.

This makes the forthcoming 22nd Conference of the Parties to the United Nations Framework Convention on Climate Change (COP 22), scheduled from 7 to 18 November 2016, very significant as regards the development of mechanisms and provisions for the operationalization of the Paris Agreement. COP22 has aptly been dubbed the implementation COP - the COP of action.

ECA has worked with its sister pan-African institutions to fortify Africa's presence at COP22 with an Africa Pavilion that will build on the success of the same effort at COP21. ECA is going to COP22 convinced that the Paris Agreement must deliver for Africa. We are therefore taking to Marrakech the following key messages, validated by the discussions at our sixth conference on Climate Change and Development in Africa, which was held in preparation for COP22. These messages urge governments and other stakeholders to show leadership in the implementation of the Paris Agreement.

The unprecedented speed with which the Paris Agreement has come into force entails an urgent call to action for those African countries which have not yet ratified the Agreement to revise their INDCs to ensure enhanced coherence and alignment with national development plans and priorities, as well as means of implementation.

- COP22 has been referred to as the "implementation COP". The Paris Agreement does not make provision for the means of implementation, particularly of the Nationally Determined Commitments (NDCs). These questions must be resolved at COP22. It is a major issue for Africa that the existing means of implementation (provisions for climate finance, technology transfer and capacity-building) are grossly inadequate to enable the comprehensive implementation of the continent's NDCs. It is therefore crucial that COP22 should review and address this question in ways that respond to the continent's development imperatives.

- The United Nations Sustainable Development Goals for 2030, Africa's transformation Agenda 2063 and the Paris Agreement must be implemented in an integrated way, with the urgent priority of reaching the poor and most vulnerable at the core of all efforts. 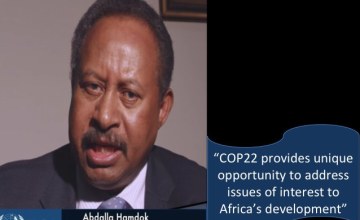 Abdalla Hamdok, the acting Executive Secretary of the Economic Commission for Africa (ECA), has called the Convention on Climate Change (COP 22) meetings in Marrakech, Morocco, "the historic entry into force of the Paris Agreement on climate change." ECA believes "an African development pathway that could propel climate-resilient economic growth is possible if an enabling environment that promotes innovation and collaborative actions for climate change solutions is put into place." More about the ECA in this BRIEFING.

- The momentum of the Paris Agreement provides an opportunity for African countries to fully optimize their abundant renewable energy resources to power low-carbon climate-resilient development and inclusive growth.

- The Paris Agreement also provides the impetus for a paradigm shift towards structural transformation based on green industrialization which adds value to Africa's commodities and increases global competiveness.

- Appropriate policy and regulatory frameworks are needed to attract investment and leverage public resources to mobilize private-sector and other sources of funding, including domestic resources, green bonds and other innovative instruments such as diaspora bonds for low-carbon climate-resilient and inclusive growth.

- African initiatives - including those launched at COP21 (such as the Africa Renewable Energy Initiative and the Africa Adaptation Initiative) - must be properly coordinated at the continental level, and implementation at the national level must be aligned with efforts to reach the Sustainable Development Goals and implement Agenda 2063.

- There is an urgent need for a coordinated framework for enhancing the role of non-State actors in climate action through regional programmes and institutions. In this regard there is also an urgent need to prepare African non-State actors for participation in the mechanism and the approaches defined in article 6 of the Agreement.

- The impacts of climate change in Africa are increasing in complexity, resulting in new and emerging threats to lives and livelihoods, catalysing new dynamics of migration, disasters and conflict, which in turn amplify the impacts of climate change. Holistic and integrated approaches to policy and implementation are needed to address these threats.

- Robust and timely climate information is critical for informed policymaking and decision-making in managing climate risks. As climate change gathers pace, a more integrated and comprehensive approach to the generation, packaging, delivery and use of climate information services for the implementation of the Paris Agreement is thus even more imperative.

- African countries should incentivize investment to transform the agricultural sector so as to capitalize on the opportunities of the nexus between climate change, agricultural production and trade for wealth and global competitiveness, especially for smallholder farmers.

- African countries should invest in the opportunities arising from climate change to create livelihood options for its youth, such as innovations in renewable energy, agriculture and environmentally sound technologies.

- There is an urgent need for collaboration within and between regions for innovation, research and development in support of climate solutions.