A Business Opportunity in the Making 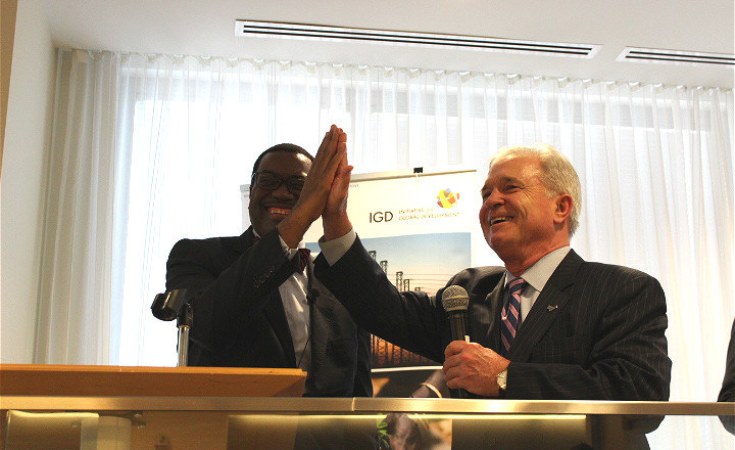 Washington, DC — Reflections on the election of Donald J. Trump to the U.S. Presidency and Africa
Donald J. Trump will be sworn in as U.S president in January 2017. So, what does this mean for the private sector in Africa?

Throughout the campaign, President-elect Trump focused largely on rebuilding America and rarely, if ever, shed light on his positions on U.S. policy towards Africa. In his first major foreign policy speech in April 2016, however, he pointedly stated that any foreign policy will put American interests first.

One thing we know for sure is that Donald Trump is a shrewd businessman and will be looking for where he can find the best deals. The Initiative for Global Development (IGD) is a network of CEOs and senior executives of sector-leading African, U.S. and global companies operating in Africa. Our Frontier Leaders know and understand the mindset of a fellow business leader. This could be a tremendous opportunity for Africa's private sector.

When Trump enters office in 2017, he will discover a rapidly changing Africa. The rising influence of homegrown African businesses in the global economy reflects the changing realities on the ground. African businesses have emerged as the drivers of growth on the continent, creating more than 80 percent of jobs in their countries. Even in years of generally depressed commodity prices, Africa is still home to some of the world's fastest-growing economies with an expanding middle class. Some 26 of Africa's 54 countries have achieved middle-income status within a short period of time.

We'll probably see one of the most visible changes at the U.S. Agency for International Development (USAID), the U.S. government agency that delivers economic, development and humanitarian assistance worldwide. President-elect Trump has clearly stated that the U.S. will get out of the "nation-building business". USAID will likely take on a "trade, not aid" and private sector-led development approach in earnest.

The Africa Growth and Opportunity Act (AGOA), the U.S.-Africa trade law provides eligible countries an opportunity to expand their exports to the U.S. market. Since 2000, trade flows from Africa to the U.S. have nearly tripled, helping to spur market-led economic growth and development progress in Africa.

Given Trump's stance on limiting free trade, the status of renegotiating and expanding AGOA to additional countries is unclear. But with an "America first" approach, a Trump Administration may put in place protectionist trade policies that would curtail foreign exports into the U.S. market, yet make it easier for American companies to export to African countries and invest in African companies for mutual interest.

Africa's widening middle class now has the spending power and a rising demand for U.S. products. The McKinsey Global Institute report, Lions on the move II: Realizing the potential of Africa's economies, revealed that consumer spending by African households and businesses totals $4 trillion annually. Wake up, U.S. companies, that number is nothing to sneeze at!

Trump's mantra throughout his campaign focused on "minding your own people". In negotiating trade deals, it will be even more incumbent upon African government leaders to ensure that trade deals benefit their own countries and help to grow their own "middles".

Folks, it's a wake up call. The lack of political will by African political leaders should be relegated to the bygone years. As engines of growth, African entrepreneurs and companies need their governments to improve regulatory environments, build an educated and skilled workforce, and expand access to finance to give small- and medium-sized enterprises (SMEs) an opportunity to flourish and be about the business of creating jobs and bringing economic prosperity in Africa.

Through IGD's Africa Investment Rising campaign, a new communications and advocacy effort, we aim to change the narrative on doing business on the continent by showcasing Africa's tremendous business and economic potential. IGD will also present the Trump Administration and new Congress with a set of strategic policy recommendations to influence and shape U.S.-Africa policy on three key issues: (1) expanding access to power; (2) boosting trade and investment; and (3) transforming the agriculture sector in Africa.

Dr. Mima Nedelcovych is President & CEO of Initiative for Global Development. His reflections were published by Huffington Post on November 1 0, 2016.

Tagged:
Copyright © 2016 Initiative for Global Development. All rights reserved. Distributed by AllAfrica Global Media (allAfrica.com). To contact the copyright holder directly for corrections — or for permission to republish or make other authorized use of this material, click here.

More From: Initiative for Global Development

Roadshow to Spur Action on Increasing U.S. Investment in Africa

IGD Joins with AfDB for Frontier 100 on 'Enabling Environment'

African Business in the World-Class Space - Frontier 100 in DC