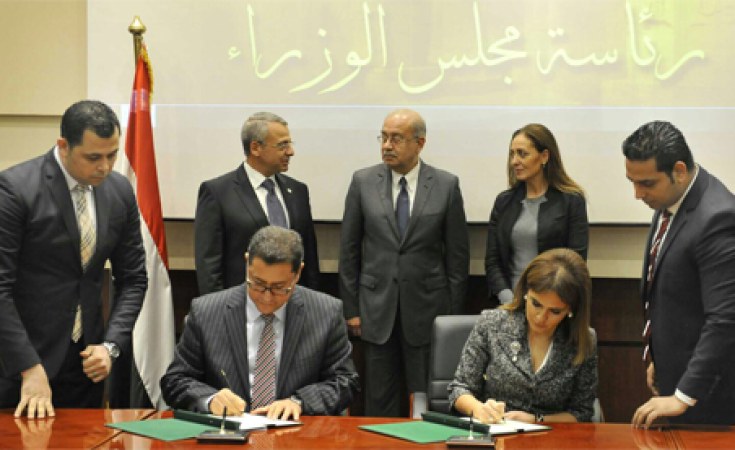 AfDB
$500 million loan agreement signed in Cairo in 2015 by the Egyptian Minister of International Cooperation, Sahar Nasr, and the AfDB Vice-President for Agriculture, Water, Human Development, Governance and Natural Resources, Aly Abou-Sabaa, in the presence of the Prime Minister of Egypt, Sherif Ismail.
Content from our Premium Partner
African Development Bank (Abidjan)

Moderated by prominent media anchor Hafez Al Marazi, the lively sessions were attended by more than 60, many of whom were entrepreneurs or from major Arab business associations.

The roundtable co-launched by Ambassador Mervat El Tallawy, Director General of the Arab Women Organization, and Leila Mokaddem, Resident Representative of AfDB in Egypt, stressed on the importance of economically empowering women and enabling them to play a bigger role in the development of their communities and countries.

During the opening speech, El Tallawy expressed pleasure with the AWO's cooperation with the African Development Bank, given the critical need to economically empower women of Africa. She stressed that the roundtable is part of a larger program supporting entrepreneurship amongst women, which impacts the national economy at the macro level, as well as the family and individual livelihoods at the micro level. El Tallawy also assured that this roundtable will be the beginning of future events that will further strengthen the organization's work in the field of entrepreneurship.

In her opening remarks, Mokaddem pointed out that gender-based inequalities continue to persist despite efforts made, saying: "Women represent almost half of the population of the African continent. However, African women do not have many chances for empowerment as compared to their male counterparts. The lack of African women's empowerment represents a lost opportunity for all African States, particularly in fields that create new jobs, boost economic growth and improve standards of living. Accordingly, the AfDB has formulated a Gender Strategy to support AfDB regional member countries in promoting gender equality and adopting best practices towards women's economic empowerment."

Gehane El Sokkary, Principal Socio-Economist at AfDB, presented the Bank's study entitled "Promoting North African Women's Employment through SMEs". El Sokkary noted that the percentage of large companies owned/managed by women in the region is greater than in other regions, while the percentage of small and medium companies owned/managed by women is much lower.

Commenting on the role of the AfDB in promoting women in business, Mokaddem said; "AfDB spares no effort to support and empower women economically via initiatives and programs financed by the Bank in African countries, including Egypt and North Africa. We are very confident in the ability of women to establish and run successful and profitable businesses that contribute to economic growth, employment creation, and more equitable distribution of wealth, in addition to improving livelihoods. One of the most successful initiatives the Bank financed in Egypt was the 'Rural Income and Economic Enhancement' project in collaboration with the Social Fund for Development. The objective of the project was to improve the standard of living and raising income levels of Egyptian families, both women and men, in the rural settings by supporting agribusiness initiatives."

The roundtable consisted of two main parts: the first involved a series of case studies of successful businesswomen discussing the challenges they faced and how they overcame them. The second part presented the efforts conducted by Women Business Associations in North Africa and the Arab world to promote women's empowerment.

From amongst the case studies presented was that of Amira Haddad from Minya governorate in Upper Egypt. In less than 10 years, Haddad had positioned herself as a prominent seed and fertilizer distributor, representing major local and international seed companies. In fact, her business was such a success allowing her to actively contribute to improving the livelihoods of many in her community. Haddad was a beneficiary of the AfDB's "Rural Income and Economic Empowerment Project."

Another case study featured Hend El Sherbini, who started as the owner and manager of a series of medical laboratories. Under her successful management, the labs soon became a major medical player in Egypt and were merged with a large regional player, with El Sherbini now the Chief Executive Officer and Executive Director of Integrated Diagnostics Holdings plc.

Neveen El Tahri, Chairwoman of the Board and Managing Director of the 138 Pyramids Project as well as Chairwoman of Delta Inspire, was a third businesswoman who made her mark as a force to be reckoned with. El Tahri spent many years in the banking and investment sectors and is now passing on the torch by actively supporting young entrepreneurs through mentoring and seed financing.

The sixth Arab Women Organization conference, chaired and sponsored by the First Lady of Iraq, focused on the role of business women in Arab States and the need to work together to transform challenges into opportunities. The conference called on associations to promote businesswomen and entrepreneurs while at the same time advocating for policy reforms at the national and regional levels towards women's economic empowerment.

According to the African Development Bank, women's economic empowerment is a cross-cutting goal reflected across the Bank's five operational priorities, referred to as the High 5s: Light up and power Africa, Feed Africa, Industrialize Africa, Integrate Africa and Improve the quality of life for the people of Africa.

To promote women's empowerment, the Bank formulated a strategy based on three pillars. The first pillar focuses on the legal status of women and their property rights, whereby the Bank supports social governance, legal reforms and safe possession of land by female farmers, and promotes private sector and business growth. The second pillar is women's economic empowerment, whereby the Bank seeks to increase access to financial and no-financial services for women, while supporting infrastructure for gender equality, increasing the productivity of female farmers, facilitating their entry to the market and providing them with vocational and technological training. The third emphasis of this strategy underlines the management of knowledge and capacity building through the Bank's provision of resources and technical assistance to raise awareness on and promote gender equality across the African region.

In her concluding remarks, Mokaddem said, "Women in our region encounter many challenges, including financial as well as social challenges related to cultural norms and societal pressures. Gender equality is an important foundation for a free market economy and represents a key step towards inclusive and sustainable development. Women's economic empowerment will have ripple effects on improving productivity, increasing economic growth, creating employment and improving the distribution of wealth and social justice."

About the Arab Women's Organization

The Arab Women's Organization is a governmental organization that works as part of the League of Arab States and is located in the Arab Republic of Egypt. Its goal is to improve the skills of Arab women and their conditions. In doing so, it implements a number of projects that aim at empowering Arab women, building their skills, supporting Arab unity, and protecting Arab families and societies through women's empowerment.

Nowadays the organization focuses on a number of key issues, most importantly: Including Arab women in the 2030 Agenda for Sustainable Development, supporting refugee and displaced women in the Arab region, and building the skills of Arab women. In addition to that, the organization holds many conferences, seminars, forums and training courses that aim at supporting gender equality issues and the empowerment of women.