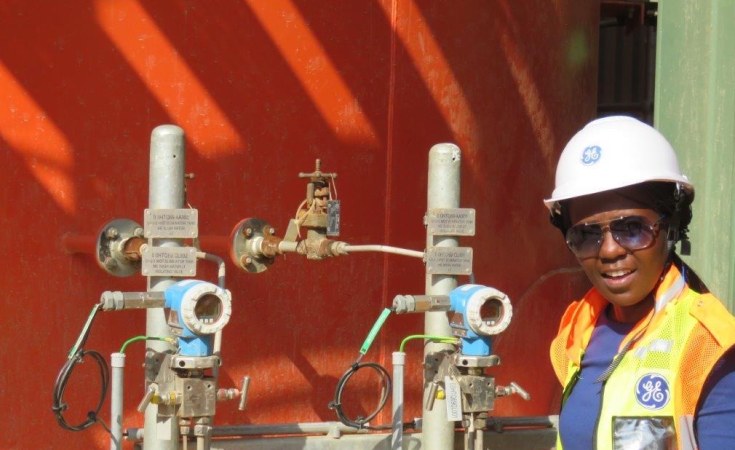 GE Steam Power Systems
Kubheka says the majority of her colleagues on the projects she managed were older than her and male. “But what I appreciated most was that they all gave me a chance to prove myself, and as soon as they realized I was good at my job, they gave me the respect I deserved,” she says. “Now I know I have nothing to prove to anyone but myself.”
Content from our Premium Partner
GE Africa (Lagos)
By Dorothy Pomerantz

People often visit South Africa to bask in the country's sunshine, learn about its history and discover its stunning natural beauty. But just east of the capital Pretoria, amid a maze of cranes and concrete, they'd find a different sight to write home about: the Kusile Power Station, a high-efficiency, reduced-emissions coal-fired power plant that will provide electricity to 3 million South African homes when it is up and running. They would also find GE's Nthabiseng Kubheka, who runs the construction of a critical piece of the power plant.

Though a coal-fired plant may seem like an anachronism at a time when the world is focused on renewables, in South Africa, coal still accounts for 77 percent of energy — and the world will rely on coal-fired plants for much of its electricity for decades to come.

South Africa has 16 coal-fired plants, 12 of which are in the Mpumalanga province — the country's coal capital. South Africa has abundant coal reserves, so the key to the future of coal-fired power plants lies in making these plants as clean as possible.

Kubheka works for GE Steam Power Systems and her role as the project director is to lead the engineering, procurement and construction (EPC) of Kusile's unique desulphurization plant — the first of its kind in Africa and the star of the project — and to make sure all processes perform as planned.

Known as the Wet Flue Gas Desulphurization Plant, it sends flue gas through scrubbers, which transform sulfur dioxide from a harmful gas into a synthetic form of the mineral gypsum by spraying limestone slurry into the flue gas. Mist eliminators then remove the moisture from the treated flue gas before it's released into the environment as water vapor. The leftover gypsum can be recycled and moved to a landfill or sold.

The plant, which is still under construction, also will include six GE 800 megawatt steam turbines, a generator, an air-cooled condenser and all the necessary piping and auxiliaries. The plant has a supercritical boiler and turbine set, meaning that it has higher steam pressures and temperatures are much higher — and is more efficient — than the other plants in the area. In addition, the plant uses a fraction of the water used by many other plants, thanks to the use of air-cooled condensers instead of a wet-cooled power plant.

Kubheka began her career 20 years ago, as a chemist analyzing raw materials for industrial companies. "Because my job involved toxins, I was moved from the lab into quality control when I was expecting my son 18 years ago," Kubheka says.

The move was a blessing. "Once I left, I didn't want to go back," she says. Her new position as a quality officer gave Kubheka "this broad picture, where I could be involved in a variety of things," she says. "It gave me the chance to learn, and to be involved with anything and everything I was interested in, and to work with people, which I realized was something I excelled at."

In 2001, Kubheka moved to South African power utility ESKOM, GE's partner in the Kusile project. After just 10 months, she was spotted as a key talent and put through the utility's Technical Managers Leadership program.

That program earned her a place on a team that refurbished an old South African power plant called Komati Power Station, her first foray into project management. By the time she left ESKOM and joined GE in 2016, she was heading a portfolio of similar projects involving coal fired plants in South Africa.

But the Kusile project was different — it involved a brand new power plant. Kubheka says the majority of her colleagues on the projects she managed were older than her and male. "But what I appreciated most was that they all gave me a chance to prove myself, and as soon as they realized I was good at my job, they gave me the respect I deserved," she says. "Now I know I have nothing to prove to anyone but myself."