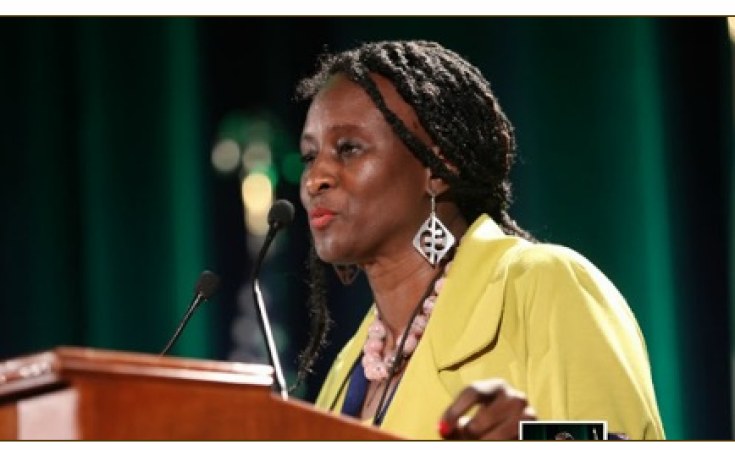 Washington, DC — Ambassador Robin Renee Sanders' new book on "The Rise of Africa's Small & Medium Size Enterprises" (SMEs) is an insightful examination of the dramatic shift in the development paradigm for Sub Saharan Africa – driven in large part by the imaginative, innovative and insta -impact leadership of the region's small businesses or SMEs.

"SMEs have helped drive economic development, growth and aided in increasing the size of the Continent's middle class," Sanders says.

With the book's Introduction by renowned civil rights leader Ambassador Andrew Young, and the Foreword by Africa's leading businessman, Mr. Aliko Dangote, Sanders' credits the determination of Africa SMEs and entrepreneurs (which includes African nationals, immigrants and the Africa Diaspora ) for stepping into the void left by 40 years of post-independence development efforts that had little impact on reducing overall poverty and creating jobs in the region.

"Africa's dynamic entrepreneurial spirit of Generation-Xers and Millennials' are and have formed SMEs and social enterprises that today are responsible for inventing many of the new apps, and conceiving better answers in response to the region's age-old poverty issues," Sanders notes . "Africa SMEs are not only a key driver for jobs, but serve as an additional catalyst to grow the middle class."

She argues that it was the 'Rise of the Africa SMEs' – converging with technology and its mobility – that changed, over the last decade, the focus and direction of development in Sub Saharan Africa. The book has a few vignettes of Sanders' work over the years with Africa SMEs during her diplomatic life and as CEO of the FEEEDS Advocacy Initiative, as well as regional examples of some of the innovative things Africa entrepreneurs are doing in sectors ranging from agriculture , education, and food security to energy and climate change.

The book also walks readers through what donors, foundations and African stock markets are doing today to help in the SME space. Sanders ends with recommendations of what more can be done by donors, African governments , the African Union, and the new U.S. administration to further assist Africa SMEs, particularly the group she calls the "critical mass," and those at the "fragile" end of Africa's middle class.

Ambassador (Dr.) Robin Renee Sanders is the founder of the FEEEDS and owns FE3DS, LLC . Prior to starting FEEEDS & FE3DS, she served as a career senior member of the U.S. diplomatic corps, holding posting as the U.S. ambassador to Nigeria, Republic of Congo, and U.S.-ECOWAS permanent representative. Sanders h as a doctor of science degree from Pittsburgh's Robert Morris University, two master's degrees from Ohio University, a Bachelor of Arts degree from Hampton University, and has presented at two TEDxTalks .

Her other diplomatic postings include : Sudan; Africa Director at the National Security Council at the White House; deputy commander of the U.S. military's Eisenhower National Resource College; special assistant to the undersecretary for political affairs and Africa assistant secretary , and head of U.S. embassy political offices in Senegal, Namibia.

Sanders , a noted international lecturer; is a Woodrow Wilson scholar; serves on the U.S. Trade Representative Africa Committee; is a member of the distinguished American Academy of Diplomacy of former senior U.S. government officials, and a member of the National Society of Scholars for her academic and public service work . She is the recipient of the Republic of Congo's Medal of Honor; the distinguished Civilian Honor Award from the U.S. military's, six State Department Superior and Meritorious Honor Awards, and a range of awards for her work as CEO-FEEEDS, notably for her Africa SME advocacy efforts.

Tagged:
Copyright © 2017 FEEEDS Initiative. All rights reserved. Distributed by AllAfrica Global Media (allAfrica.com). To contact the copyright holder directly for corrections — or for permission to republish or make other authorized use of this material, click here.