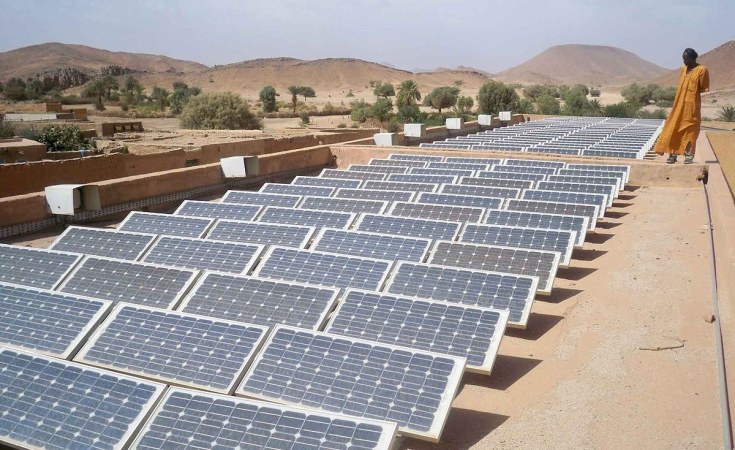 Magharebia Flickr | Wikipedia
The Algerian authorities hope that solar and wind power will enable the country to emerge from its dependence on fossil fuels.
Content from our Premium Partner
GE Africa (Lagos)

Algeria is known for its oil and gas, but take a quick look at a world map, and you’ll see that its mountains and Mediterranean coastline mean huge wind energy potential.  Add in its large surface area and desert topography, and the country enjoys huge solar energy potential as well.

In fact, Algeria’s wind resources are estimated very large due to the size of the country with an estimated capacity of 35 THW per year, also the Mediterranean North is characterized by a coastline of 1200 km coastline and a mountainous field with microclimates, what gives the giving the country a high potential of Wind development.

In addition, Algeria has the largest solar field in the world and the largest capacity of the entire Mediterranean basin, with a territory composed of 86% of the Saharan desert, 2000 hours of average annual sunshine. The energy generated by solar power would represent 5000 times the Algerian consumption of electricity.

The country has outlined an ambitious National Renewable Energy Program that seeks to install about 22,000 megawatts (MW) of clean energy by 2030. Nearly 10,000MW of that total would be exported.

This would save Algeria approximately 300 billion cubic meters of  natural gas  annually, an amount equivalent to eight times the country’s consumption of natural gas in 2014.

Speaking about GE’s role as Lead Sponsor of the conference, Touffik Fredj, President and CEO of GE North West Africa, said, “Algeria is fully committed to its energy transition and to integrate renewable energy solutions in its energy mix. At GE, we’re thrilled to see this shift happening and to reinforce our commitment to support the ambitious renewable energy plan developed by the Algerian Government".

GE has been a strong partner to Algeria for more than 40 years , helping support the country’s development strategy in the power sector, as well as in the fields of aviation, healthcare, oil and gas, transportation and water.