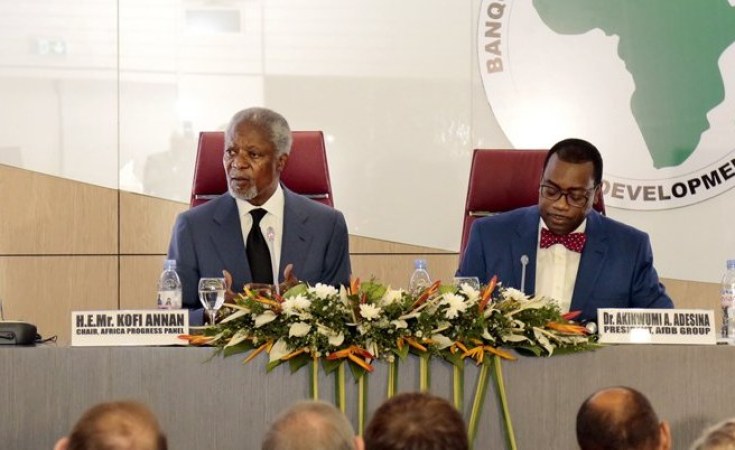 Distinguished Guests, Ladies and Gentlemen, I am pleased to be with you in Abidjan this morning.

Achieving universal access to modern energy is critical to Africa’s transformation. The Africa Progress Panel, which I chair, welcomes the opportunity to collaborate with the African Development Bank and other key stakeholders in pushing for the changes we need to see.

It was in that spirit that I gladly accepted President Adesina’s invitation last year to serve as a lead champion of the New Deal on Energy for Africa. His leadership in positioning the AfDB at the forefront of the New Deal process is precisely what is needed to change the game for Africa.

Two years later, this need remains as urgent as ever. Nearly two-thirds of Africans – 620 million people – still do not have access to “affordable, reliable, sustainable and modern electricity”, the energy goal that is central to Agenda 2030.

Africa’s energy deficit continues to stifle economic growth, job creation, agricultural transformation, and improvements in health and education. Meeting Sustainable Development Goal 7, the energy goal, is a pre-condition for achieving 2 many of the other goals.

The good news is that we are no longer in the dark, so to speak, about how to tackle this challenge. In several countries, including Ethiopia, Kenya, Morocco and South Africa, renewable energy makes up an increasingly important share of national power generation.

There are also a number of promising initiatives aimed at providing electricity across borders, mostly drawing on renewable resources such as solar, wind and hydro power.

We now need to see more of them deployed at far greater scale to bring power and light to Africans who still lack modern energy. That is the core message of the APP’s new report, Lights, Power, Action: Electrifying Africa, which is launched today. Traditional approaches to extending the grid are no longer viable as the main option for African countries.

They take too long and do not meet the needs of our growing economies and societies. Instead, governments and their partners need to re-imagine their energy future. We are not saying countries should immediately stop using fossil fuels and switch to renewable sources of energy.

As our report clearly states, the cost of transitioning to renewables may be prohibitively high in the short term – especially for countries that use their sizeable endowments of coal and other fossil fuels to generate energy.

What we are advocating is that African governments harness every available energy option, so that no one is left behind. Each country needs to decide on the most cost-effective, technologically efficient energy mix that works best for its own needs.

To meeting the rapidly growing demand, that energy mix will gradually progress towards greater use of off-grid household systems and mini-grids. It should also lead to the emergence of more flexible, hybrid national energy systems that link grids to off-grid generation. Mobile phone technology has already helped Africa to leapfrog over conventional technology and to improve financial and social inclusion. In the same way, we foresee that innovation will bring millions of Africans into the energy loop, leading to better health, better education, better access to markets, and better jobs.

Off-grid electricity generation used to be regarded in Africa as a stop-gap measure – a way to power a few lights during the long wait for a grid connection. In recent years, the number of households connected to off-grid power has soared, improving millions of lives while relieving a chronic shortage of power. Some of these home systems may in future connect to grids through buy-back schemes, enabling households to earn extra cash from the power they generate. Such arrangements are already working in Australia, some parts of Europe and the United States. Overall, however, policy and regulatory environments in Africa need to improve considerably to make such linkages reality. 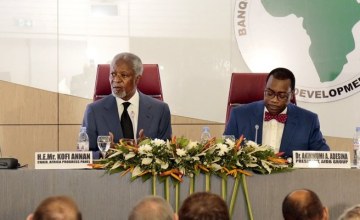 The Chair of the Africa Progress Panel and former UN Secretary-General, Kofi Annan, and the President of the African Development Bank, Akinwumi Adesina, have called on African governments to do everything possible to close the continent's huge energy gap. They made the call on Monday, March 13, 2017 in Abidjan, at the launch of the Africa Progress Panel Report on "Lights, Power, Action: Electrifying Africa," which calls for the adoption of every available on-grid and off-grid solution to light up and power Africa. Read more. More about the AfDB in this BRIEFING.

As we document in our new report, off-grid solar products can act as rungs on an “energy ladder”, providing a range of energy services to households and enterprises with different energy needs and incomes. Mini-grids can also offer sustainable permanent alternatives to connecting to the grid, especially as reliable and affordable products come on-stream that are attractive to small and medium-sized enterprises as well as communities operating far from the national grid. The agenda is clear and the challenges are well known. As well as leading the way in promoting wider use of off-grid and mini-grid technology, African governments must continue to work hard to transform national energy grids that are often unreliable and financially fragile.

Many energy utilities are mismanaged and inefficient. A lack of accountability and transparency in their governance also nurtures corruption. Electricity theft at is often a result of this malpractice; rolling black-outs are the result of mismanagement. All continue to feed a deep sense of frustration among citizens. They also highlight why power provision has become a highly political issue in several countries. Poor energy governance reflects the wider governance deficit that threatens to derail development efforts in a number of countries.

So what do African governments and their partners need to do to make this vision of an empowered Africa a reality? Africa’s leadership, in both public and private sectors, needs to step up and champion the “energy for all” agenda. Governments need to intensify their efforts to put in place the right regulatory environment that give the energy sector incentives to deliver on its transformative potential.

The private sector, African and non-African, should be encouraged to enter energy generation, transmission and distribution markets, deepen linkages throughout the value chain, and build the investment partnerships that can drive growth and create jobs. While the onus is on African leadership and ownership of this agenda, Africa’s energy future is also an issue of global relevance. Although Africa only accounts for a tiny fraction of global emissions, it wholeheartedly embraced the Paris climate agreement’s overarching ambition – limiting global warming through unshakeable and progressive commitment to a low-carbon planet.

The Paris commitment has led the industrialized countries to pledge billions of dollars to supporting the low carbon transition, in Africa and elsewhere. However, and as we have repeatedly highlighted in our reports and our public advocacy, very little of that money is moving yet. Ladies and gentlemen, As our new report shows, where there is good leadership, there are excellent prospects for energy transition, and leaders in a number of countries are demonstrating the levels and intensity of political will needed to address these serious and persistent problems. We urge governments to put in place the integrated plans and policies that can scale up Africa’s energy transition.

The success of countries such as Côte d’Ivoire, Ethiopia, Morocco, Rwanda and South Africa shows what can be achieved. Achievements at the national level are essential but only part of the solution. To fully address the energy challenges, governments must collaborate more closely on a continental scale. Improved cross-border power trade is crucial to realising Africa’s energy potential.

Yet less than 8 per cent of power is currently traded across borders in Sub-Saharan Africa. There is a glaring need to adopt a more continental approach to power infrastructure development and management in order to accelerate regional power integration.

This must involve a greater pooling of electricity resources and harmonisation of national grids. Massive increases in investment in regional transmission infrastructure and the development of new power trading arrangements are also essential. The ultimate goal should be to interlink Africa’s numerous and fragmented power initiatives to create a single pan-African power grid.

We know what is needed to reduce and ultimately eliminate Africa’s energy deficit.

Now we must focus on implementation.

The time for excuses is over.