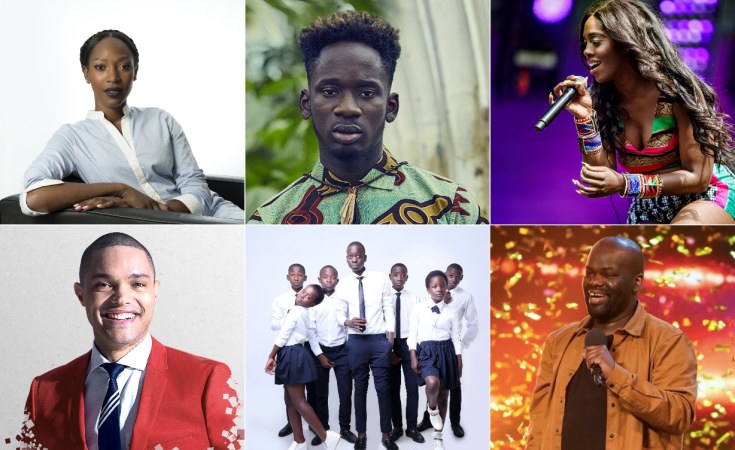 Cape Town — There's no doubt that Africa has talent. Each year, the continent continues to churn out impeccable talent in the entertainment industry, proving to the world that they are a force to be reckoned with.

Here are some of the artists making the continent proud.

Tiwa Savage
The popular musician has continuously put Nigeria on the map with her massively successful career abroad. Tiwa recently thrilled fans at the 2017 Budweiser Made in America Festival. Writing on her Instagram, Tiwa revealed that over 70 percent of the crowd that showed up for her event were not Africans but they sang along and bopped to her songs.

The award-winning singer has been named among 100 of the world's most inspirational and innovative women by the British Broadcasting Commission. Tiwa's music has traversed Nigerian borders so much so that she's listed amongst the most influential women on earth.

What would a list be without including one of Kenya's best exports Vanessa Kingori?

Kingori, a British citizen of Kenyan and Caribbean origin, is the first woman and the first black woman to head one of the most prestigious and oldest fashion magazines in the world.

She is among the steadily rising number of women who occupy seats which would have otherwise been deemed inaccessible to them a while ago.

The Afrobeat musician recently made history as the first Nigerian and indeed African musician to be named Apple Music's Up Next Artist. Mr Eazi is signed to Starboy Worldwide, the imprint label of Nigerian recording artist Wizkid. Oluwatosin Oluwole Ajibade, popularly known as Mr Eazi, was born in Port Harcourt, Nigeria before moving to the outskirts of Lagos when he was four years old. He attended university in Kumasi, Ghana, which had a major influence on the evolution of his Banku sound, which fuses elements of music from both Nigeria and Ghana. Mr. Eazi's name was everywhere in 2016. From being nominated for various awards like The Future Awards Africa and even spreading his banku music all over Africa.

In short, it's no matter of small importance that Eazi is a rising Afrobeat artist during a most critical cross-over moment for the genre.

South African Actress Thuso Mbedu Has Been Nominated For An Emmy

The fast-rising actress has been nominated for International Emmy for her role as Winnie on the drama series Is'thunzi. Mbedu is the only African to be nominated this year. Thuso has been making headlines across South Africa. She has appeared on shows including Isibaya and Scandal!, but her first big break into the industry came when she joined Is'ithunzi as the brave teenager Winnie. We are rooting for a win for you...

The popular comedian continues to make South Africans proud. Getting to host the U.S. Daily Show is tricky enough, but Trevor is helping deliver Emmy quality content. Trevor Noah recently walked away with Best Short Form Variety Series for his YouTube special, The Daily Show: Between the Scenes, at the award's Creative Arts ceremony.

This is not the first award Noah has won this year. He has received a GLAAD award for his work with The Daily Show, a NAACP Image Award, where he walked away with two awards for 'Born a Crime', winning the Literary Work category: Debut Author and Outstanding Literary Work Biography/Autobiography. In May, he won Best Host at the 2017 MTV Movie Awards.

Ghetto Kids Dance Crew From Ugandan to the World

The Ghetto Kids hit a new high when they became the first Ugandan performers to take the stage at the BET Awards. Their performance was hailed by Ugandans but the Ghetto Kids are not done yet. Popular Ugandan musician and manager Eddy Kenzo says he has been in talks with Beyonce's team to have the kids grace one of her music videos. All we do now is play the waiting game.

The fast-rising dance crew has graced the cover of the latest issue of Vibe Magazine alongside U.S.-Moroccan rapper, French Montana. The Ghetto Kids have featured in French Montana's video, Unforgettable, and the singer also brought them on stage to perform with him during the 2017 BET Awards in Los Angeles. The group also made news when they appeared on The Ellen Degeneres show.

Malawian Comedian Finished Third On Britain's Got Talent
Apart from narrowly missed winning the crown by a whisker after finishing third in the UK's biggest TV talent show - Daliso Chaponda, originally from Malawi, has made the continent proud. The comedian landed his own stand-up comedy show on BBC Radio 4. The series will see the Malawian comedian will take on the role of "cultural relationship guidance counsellor", the station said. The history of Britain's relationship with Africa will be explored in the series, called Daliso Chaponda: Citizen of Nowhere.

Daliso will perform his stand up comedies in Malawi on November 24 at Victoria Gardens in Blantyre and November 25 at BICC in Lilongwe.

Lastly, but certainly not least, the recent rise of other African artists including Nigerian stars Wizkid, Davido, and Tekno, who have all signed global deals with Sony, has had the music business looking to Africa for the next breakout artists.