Nigeria: Majority States Pass 'Not Too Young to Run' Bill 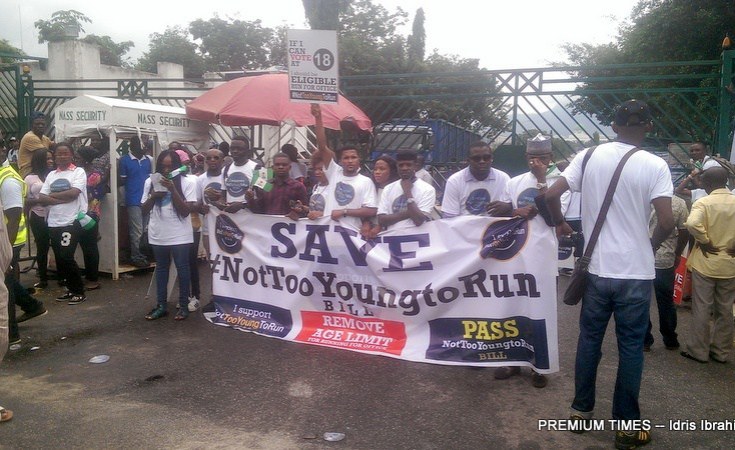 The bill seeking to amend sections of the 1999 Constitution to reduce the age limits for eligibility for elective offices in Nigeria, known as the Not Too Young To Run bill, has secured the endorsement of 24 states.

Both chambers of the National Assembly passed the amendment bill in July last year, leaving the states' Houses of Assembly to continue the legislative process.

However, the principle guiding the process of constitutional amendments would require the president to append his signature to finally enshrine it into law.

The age reduction bill is expected to enhance the chances of young Nigerians in participating in politics and to seek for elective positions as candidates.

The bill met the required two thirds majority of all the 36 states (24 states) on Thursday when Plateau and Anambra states passed the amendment.

The bill was rejected by the Taraba House of Assembly.

Section 131(b) requires that a person is qualified to be president if he has attained the age of 40 years. Similarly, Section 65(a&b) stipulates the ages for the Senate and the House of Representatives as 35 and 30 years respectively.

But the amendment to these sections will see the age of running for the office of the President reduced from 40 to 35 years old, just as a 30-year-old can now run for governor.

The bill also stipulates that 25-year-old people can now legislate in the National and State Assemblies.

The Youth Initiative for Advocacy, Growth & Advancement (YIAGA), an organisation which has been in the forefront of promoting the bill, said on its website, yiaga.com, that the states which passed the bill had been inaugurated into the Not Too Young To Run Hall of Fame for voting in line with aspirations of the Nigerian people.

"By this singular act, Nigerian youth have made history and written their names in gold. The passage of Not Too Young To Run is a demonstration of the commitment to the tenets of representative democracy," the group said.

"We commend them for fulfilling their promise to their constituents and the Nigerian youth. Nigerian youth will always remember them for showing leadership in promoting youth inclusion in democratic politics in Nigeria. Posterity will be fair to them."

On Friday, the group, at a press conference, urged the state assemblies to quickly conclude their task and submit the amendments to President Muhammadu Buhari

Reading out the group's recommendations, Hamza Lawal, a member of the movement, urged the "state assemblies to without delay, transmit the amendment to the national assembly.

"We call on the National Assembly to transmit the constitutional amendment to President Muhammadu Buhari for assent as soon as the bill is received from the state assemblies.

"We call on the president to assent to the constitutional amendment bill especially the Age Reduction Bill as soon as the bills are transmitted to him for assent.

"Should the president delay or decline to assent the bill, we call on the National Assembly to veto the president.

The group also inaugurated Taraba State into the Not Too Young To Run Hall of Shame, describing its vote against the bill as a major setback for Nigeria's democracy and hoped that "it will be the only state in the Hall of Shame."

The group further urged youth of Taraba State to vote out "the 11 lawmakers who voted against the will of the young people."

Speaking at the conference, a lawmaker, Tony Nwulu, who sponsored the bill in the House of Representatives, frowned at the Taraba State house of assembly for voting against the bill, stressing that "It is not about party or individual politics; it is about getting young people more involved in politics."

"Politicians go out to lobby and mobilise youth to vote. If they are good enough to vote you to power, why aren't they good enough to be voted for?' he said.

He also urged Mr. Buhari to assent the bill as soon as possible and appreciated the Senate President, Bukola Saraki, the Speaker of the House of Representatives, Yakubu Dogara and other lawmakers at the National Assembly who supported the bill.

The convener of the movement, Samson Itodo, called on political parties to uphold the principles of transparency in election.

"We note that parties can undermine and jeopardise youth candidacy during election when party primaries are not transparent", he said.

He further announced that the group has declared March 14, 2018 as a National Day of Action for Presidential Assent.

Mr. Itodo called on all young people "to join a march to the Presidential Villa and constructively engage the president to assent the bill."