Africa: Tillerson to Reaffirm Ties With Africa During Trip 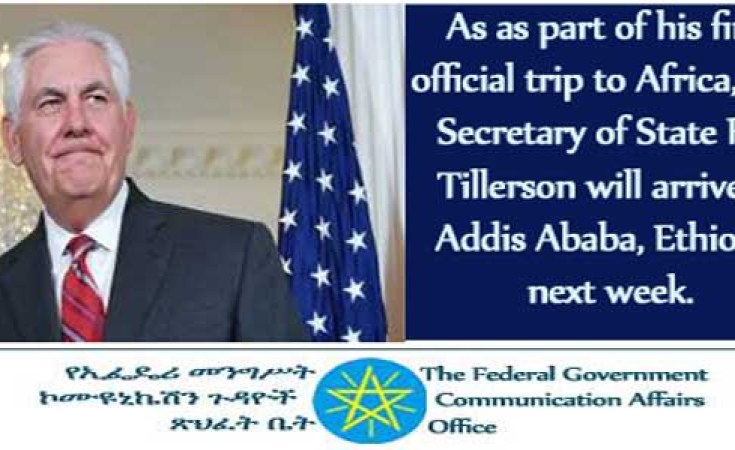 U.S. Secretary of State Rex Tillerson’s highly anticipated trip to Africa is an opportunity to position the United States to “play a significant role in supporting” the continent and to “highlight the important relationship,” according to a senior American official.

“It’s not only based on economic and commercial development, but in the context of building a strong institution, governance and security as well as human rights,” a senior State Department official said during a background briefing Friday.

In his first trip to Africa as the top U.S. diplomat, Tillerson will meet with leaders from Chad, Djibouti, Ethiopia, Kenya and Nigeria during his travels from March 6-13.

Washington’s vision of a genuinely inclusive political process in Ethiopia, Kenya and other African nations includes institution-building, peaceful transitions of power, and holding governments accountable to the people, the official said.

In Ethiopia, officials have declared a state of emergency amid widespread anti-government protests that have persisted for more than two years. In Kenya, there is a growing demand for political diversity.

Secretary Tillerson’s trip next week is also seen as a good opportunity for the U.S. to reaffirm ties with African nations, particularly after U.S. President Donald Trump referred to the continent and Haiti in a derogatory manner earlier this year.

“His visit will be a reaffirmation of [the] U.S.-Africa partnership and U.S. commitment to Africa. Expectations will be high and the secretary will be pressed to give some substance to our policy towards Africa,” Thomas-Greenfield said.

Tillerson’s visit also comes after the recent mass kidnapping of schoolgirls in Nigeria.

Secretary Tillerson "plans to discuss ways that we can work with our partners to counter terrorism," as well as to advance security, State Department spokesperson Heather Nauert said.

The United States recently put several affiliates of the Islamic State (IS) terror group in Africa on the terrorism blacklist in an effort to cut off any financial support they may have been getting from within the United States.

“Africa has traditionally been an area in which terrorist groups have operated. And part of the reason for that is because they assessed that they’re able to move across borders undetected," State Department’s Ambassador-at-Large for Counterterrorism Nathan Sales told VOA.

According to the State Department, five of the world’s 10 fastest-growing economies are in Africa. By 2030, Africa is expected to represent about one-quarter of the world’s workforce and consumers. But experts note more must be done to take advantage of this growth.

“The continent needs to work more harmoniously in dealing with issues related to health care, to conflict, to strengthening trade, and breaking down tariffs and economic barriers that prevent the continent from realizing its potential,” Johnnie Carson, senior adviser for the United States Institute of Peace, told VOA.

Carson said the work that the U.S. does in the areas of health care, education and agriculture are critical to Africa's development.