Africa: Arresting Girls for Being Pregnant Will Not Put an End to Teenage Pregnancy 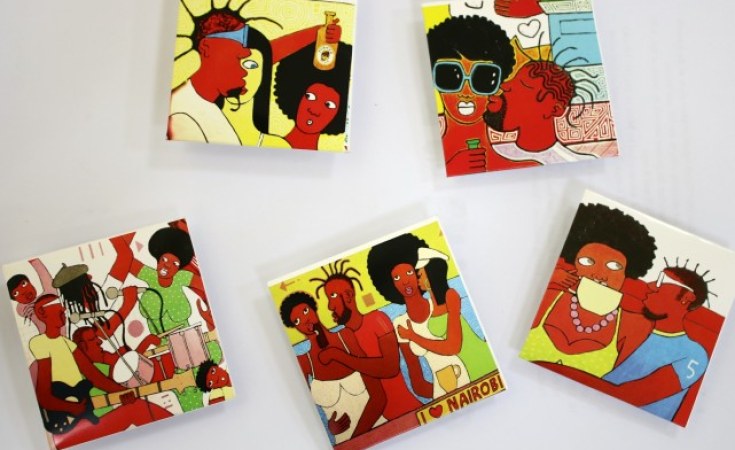 Photo: Capital FM
Michael Soi's artwork to be used as condom covers to promote safe sex among the youth.
This is Africa (Hilversum)
opinion By Kagure Mugo

We are failing our girls by denying them information about sex, says Kagure Mugo.

In Tanzania, five schoolgirls, along with their parents, have been arrested. Their crime? The girls had fallen pregnant. Their 'partners in crime', who have since hit the road running, are also being hunted down. These arrests come after an order was issued by District Commissioner Sebastian Waryuba in a crackdown aimed at ending teenage pregnancy in this East African nation.

According to a UNFPA report, a sixth of Tanzania's female population between the ages of 15 and 19 fall pregnant. One young woman has spoken out about how girls are lured into relationships with small gifts and fall pregnant because there is a lack of awareness and education. In rural areas especially, young girls fall pregnant due to a lack of information on reproductive health, the teaching of which is often stigmatised.

In Tanzania, girls who fall pregnant are forced to leave school. Zena Mkumbo, 19, who sold charcoal to support her daughter, said, "When I got pregnant, I was expelled from school and that was the end of everything for me." The clear message is that if you fall pregnant, school is no longer an option for you.

In neighbouring Uganda, the Ministry of Health has blocked attempts to endorse proposals that seek to tackle the issue of teen pregnancy and has branded the distribution of contraceptives to 15-year-olds an 'erosion of morals'. A battle has broken out over whether 15-years-olds should be given access to family planning services. The Ministry refused to consider guidelines aimed at tackling the high teen pregnancy rate in Uganda, terming them 'morally wrong'. Claims were made that such measures would 'encourage promiscuity and abortion'.

Activists in the country have condemned this action as 'a failure of leadership'. Civil society actors and health experts argued that 'withholding information from teenagers that would have helped them to avoid unnecessary relationships, risky sexual behaviours, unwanted pregnancies, among other dangers' was shortsighted and immoral. Uganda is said to have the highest teenage pregnancy rate in the region. According to the Uganda Demographic Health survey, "25 percent of adolescent girls and young women aged between 15 and 19 are either pregnant or a mother, which percentage is one of the highest in sub-Saharan Africa."

Opposition to sex education for teenagers exists in other East African nations too: A push to expand sex education in Kenya has been met with lobbying in that country. Lobby groups have sought to fight the review of the sex education curriculum, terming it 'un-African and destructive'. The issue of comprehensive sex education is contentious, to put it lightly.

Those who oppose it, such as CitizenGo, have stated that '[a] rights-based approach to sex education encompasses a great deal more than just teaching children and the youth about sexual intercourse and human reproduction. (This) curriculum is more destructive than Boko Haram or Al-Shabaab.' Groups such as these are opposed to children being taught 'un-African' ideas, such as masturbation, and issues around sexuality and urges that children be taught abstinence. This approach is still being advocated even though a study that was conducted by the African Population and Health Research Centre and the Guttmacher Institute in 2016 showed that a quarter of students aged 15 to 17 interviewed had already had sexual intercourse at least once. This study also showed that the current sexuality education programmes were 'failing students as well as international standards'

Clearly there is a problem to tackle

Unsafe and harmful sexual practices, STDs and STIs and teenage pregnancy remain a perturbing issue, one that requires urgent intervention worldwide. According to one research paper, 'globally, the prevalence of teenage pregnancy was reported to be about 16 million girls aged 15 to 19 and 1 million girls younger than 15 years yearly in low- and middle-income countries'. Young girls not attending school and falling pregnant is clearly a problem that requires local and international intervention. According to the same report, sub-Saharan Africa recorded the highest prevalence of teenage pregnancy in the world in 2013, at around 30 percent, and this number has remained steady.

It is completely possible to provide a good basis for sex and sexuality in real world practice within the African context, as history shows. This makes the utter reluctance to engage in this somewhat suspect. One often finds that the push for programmes that are centred on abstinence stem from religious groups, particularly American fundamentalist evangelical groups.

The manoeuvring of these groups, under the banner of being 'pro-family', is so prominent on the African continent that it resembles a form of independent foreign policy. Reports have shown that these evangelical groups are working tirelessly on the continent to push anti-gay and anti-women misogynistic agendas. This can be seen in their calls for an 'anti-homosexuality Bill' and the lack of access to legal abortion in places where the rate of mortality from illegal abortions is extremely high. Abstinence programmes that limit sex education is just one of the branches of this pseudo-foreign policy.

It is the young who suffer

The failure of sex education on the African continent is not only detrimental to the youth in general but is putting added pressure on the ability of our girls to access education and, in some cases, basic human rights. Girls on the continent are dropping out of school at an exponential rate because of the demanding burden that being pregnant and raising a child presents.

Having a comprehensive understanding of sex and sexuality will go a long way towards ensuring that young girls are not put in harm's way, or in situations where their only option is to be a mother - not a student or even just a person who is sexually empowered. We need to take the 'moral basis' out of our approach to sex education and start taking practical steps to protect our young girls, to ensure that they too can fulfil their full potential and enjoy their basic human right to education and bodily autonomy.

More Calls for Pregnant Tanzania Schoolgirls to be Arrested
Tagged:
Copyright © 2018 This is Africa. All rights reserved. Distributed by AllAfrica Global Media (allAfrica.com). To contact the copyright holder directly for corrections — or for permission to republish or make other authorized use of this material, click here.