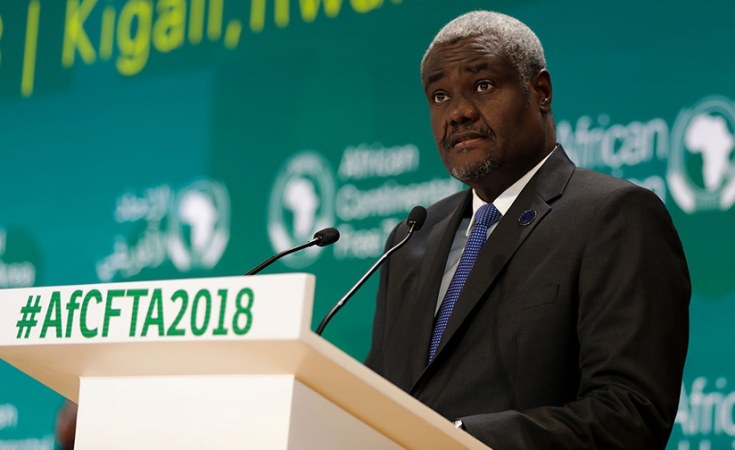 Photo: Timothy Kisambira/New Times
Chairperson of the African Union Commission, Moussa Faki Mahamat, speaks at the meeting of the Executive Council of Ministers of African Union.
The New Times (Kigali)

Mahamat made the call during the opening of the 18th Extraordinary Session of the Council of Ministers of the African Union in Kigali yesterday.

"The Agreement will be a historic pact, which has been nearly 40 years in the making and represents a major advance for African integration and unity. The African Continental Free Trade Area will also strengthen Africa's position in global trade," he said.

Mahamat further urged African countries to overcome fears and self-interests as these continue to be barriers to regional trade and growth.

Member countries and other continental trade bodies ought to look at the collective benefits as they outweigh the concerns, the AU official said.

Foreign Affairs Minister, Louise Mushikiwabo, who also doubles as the Chairperson of the Council of Ministers, emphasised that the agreement is good for Africa and should enter into force as soon as possible.

"By signing and ratifying it, we would signal that we are determined to play our part as a global player while promoting the continent's economic interests as one, through a single African market," she said.

Mushikiwabo observed that the negotiations and implementation of previous agreements have given African countries capacity to implement the AfCFTA.

"With the AfCTA-related agreements before us, we are now well armed to improve our social structures, improve the livelihoods of even our poorest communities, and develop regional and continental value chains to ensure prosperity and well-being for our people," she said.

Beyond the signing of the agreement, Minister Mushikiwabo said that countries ought to also address other trade concerns such as burdensome regulations, access to finance by the private sector, infrastructure networks, and simplification of customs processes to significantly increase intra-Africa trade.

Vera Songwe, the Executive Secretary of the United Nations Economic Commission, for Africa observed that the agreement comes at a time when there are instances of anti-globalisation and protectionism.

"We are currently witnessing some new and quite extraordinary developments in the global economy. In the developed world there is a rising tide of protectionism and anti-globalization. Although we are not the focus, Africa will not remain untouched," Songwe said.

27 African States Sign Treaty for Free Movement of People
Tagged:
Copyright © 2018 The New Times. All rights reserved. Distributed by AllAfrica Global Media (allAfrica.com). To contact the copyright holder directly for corrections — or for permission to republish or make other authorized use of this material, click here.