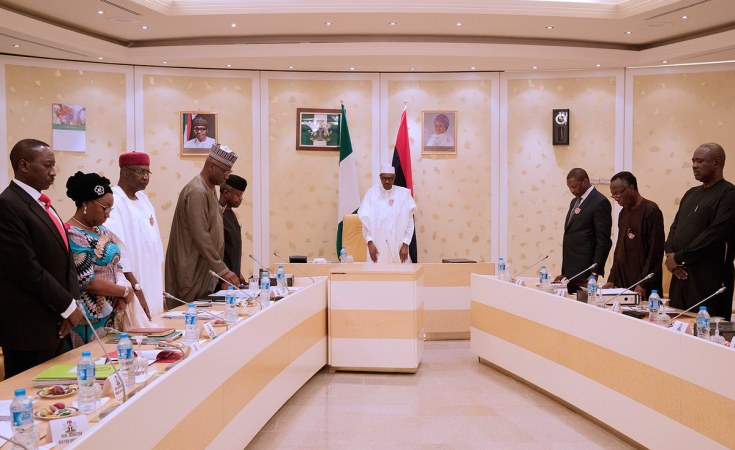 Femi Adesina, the Special Adviser to the President on Media and Publicity, said this in Abuja while addressing State House correspondents on the outcome of the FEC meeting.

He named members of the committee from the Ministries, Departments and Agencies as: Finance, Budget and National Planning, Labour, Foreign Affairs, Science and Technology, FIRS, CBN, Customs and Immigration.

According to him the committee will "look into the proposals that are contained in the CFTA and they will brief the FEC within two weeks and a way forward will then be unfolded."

He said that the explanation was necessary because the agreement was to be signed in Kigali, Rwanda, on Wednesday but the president did not attend the AU summit.

Mr. Adesina said that the explanation by President Buhari to FEC which the council bought was that he would not want to agree to anything that would hinder local entrepreneurs as on the surface the agreement had the capacity to do so.

He further said that the president said he would not want to sign an agreement that could encourage the dumping of finished goods in Nigeria as it would be contrary to the country's interest.

Also, Mr. Buhari stated that the country had yet to understand the full economic and security implications of the agreement and that more consultations with stakeholders were necessary.

Explaining further, Mr. Adesina stated that some of the African countries could have signed treaties with other nations which, by the CFTA, would warrant their pumping products not needed in the country from other nations.

Also the FCT Minister, Bello Mohammed, said that FEC approved a contract for the provision of security equipment and associated infrastructure including furnishing for the UN building currently under construction in Abuja.

He recalled the bombing of the building in August 2011 by Boko Haram which destroyed the building and the federal government elected to rebuild the complex because of the strategic partnership it had with the UN.

He said the reconstruction was almost completed and in order to forestall any future attack the UN requested for critical security infrastructure to enable its 18 agencies to resume work in the premises.

Mr. Mohammed said the security infrastructure contract was awarded to Julius Berger which constructed the building for N6.98 billion and would be completed in 12 months.

He said the scope was for the contractor to provide the latest level of security perimeter fencing capable of withstanding bomb blast as well as fortifying it to international standards, provision of three police posts and installation of body and baggage scanners and CCTV.

Also the Aviation Minister, Hadi Sirika, said the council approved contract for the procurement and installation of very high frequency radio communication equipment in Kano, Abuja, Lagos and Port Harcort and 10 other airports.

Mr. Sirika said the total cost of the contract which would be completed in 20 months was NI.147 billion and would be a big relief to the industry.

Free Trade Pact Will Make Africa More Competitive - AU Chair
Tagged:
Copyright © 2018 Premium Times. All rights reserved. Distributed by AllAfrica Global Media (allAfrica.com). To contact the copyright holder directly for corrections — or for permission to republish or make other authorized use of this material, click here.